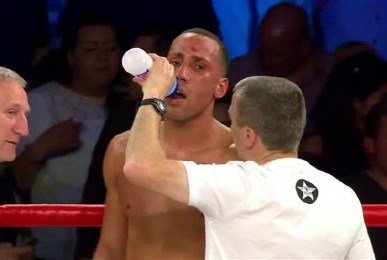 James picked up tonight where he left off last month in Quebec. DeGale immediately pressurised his Croatian opponent and used the jab, sometimes on the double, to set up his left hand during round 1.

Round 2 saw DeGale consistently outwork Bozic with an array of body punching and impressive hand speed. Stjepan did manage to walk ‘Chunky’ back onto the ropes at times, a flaw DeGale had promised to iron out of his game.

The third round opened with a long left hook straying well below the belt line as the Croatian grimaced in obvious pain. James dominated the round with dazzling hand speed and employed a variety of punching angles to keep his opponent off balance.

The next stanza opened with a fast assault by DeGale, followed by periods spent with his back against the ropes. Another low blow from the Englishman was spotted by referee Ian John Lewis. Clearly another DeGale round but there were moments of optimism for Bozic.

The fight ended between rounds rather unexpectedly as Bozic’s corner pulled out their man.

In the post fight interview when asked about the stoppage DeGale said “when you’re in there with them small gloves, it hurts.”

James was disappointed the fight didn’t last a few rounds longer “I’m super fit, I can do the 12 rounds comfortably.”

Watching the replay of the low blow from round three DeGale said “that was a touch low.”

When asked about his interest in a fight with Froch “when I box to my best ability it’s going to be hard to beat me….I’m in boxing for the big fights”
James also spoke about other possible routes to a world title “why don’t I fight the winner of Bika-Periban for the WBC title?”

The impressive Kid Galahad improved to 14-0 on the undercard. The rising star boxed patiently to a perfect game plan and systematically wore down his Ghanaian opponent, Isacc Nettey. Clever punch selections and accurate delivery of both body and head shots hurt Nettey and the referee rightly waved off the fight in the 5th round. It was the first time Isacc had been stopped in a 30 fight career. In the post fight interview Galahad stated his desire to mix it with the exciting Belfast boxer Carl Frampton. Team Galahad also outlined their interest in boxing for the British title next should the opportunity come their way.