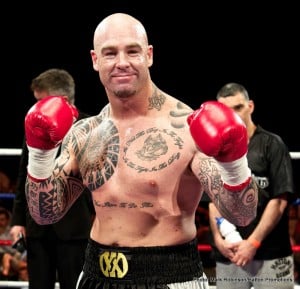 LUCAS “BIG DADDY” BROWNE has said his next fight could be in the UK, after he halted Travis Walker in Melbourne on Thursday (July 25).

The Perth puncher, 34, recovered from a flash knockdown in the first round before taking charge of the fight, dropping the tough American three times, and forcing him to quit on his stool after seven sessions.

The win takes his perfect ledger to 17 wins with 15 stoppages and moves him further up the heavyweight ladder.

Originally, Browne was scheduled to face Sheffield giant Richard Towers, but visa issues meant the fight was scrapped at the eleventh hour.

Now “Big Daddy” says he’s prepared to jet across the world and face the Englishman in his backyard.

Due to his all action style, and appearances on Hatton Promotions’ cards during 2012, Browne has earned himself something of a cult following in the UK and is keen to impress the fans again.

“Walker was my toughest fight to date and he certainly had some good power,” Browne said. “He was cagey in parts and I had to try not to get hit with a silly shot.

“I’m capable of much better and I look forward to improving even further. I’ll take my game to another level. I know I have to and I will.

“There’s talk of going to England to fight Richard Towers. All I can say is bring it on! Third time’s a charm. If the fight can get made over there, I really look forward to boxing in front of my British and Irish fans.”

Matt Clark, Browne’s manager, said: “I’m happy we got a fight against a credible opponent at short notice and we got the win. We’ll need to improve and make adjustments moving forward. Lucas probably neglected his jab a little. I felt when he used it he was controlling the fight.

“If it’s Towers in England next, we welcome the challenge. There’s talk of Leapai in the not too distant future and we look forward to that one too.”

He added: “Our immediate goal remains the Commonwealth heavyweight title. It’s a prestigious belt and we are determined for Lucas to challenge for it.”