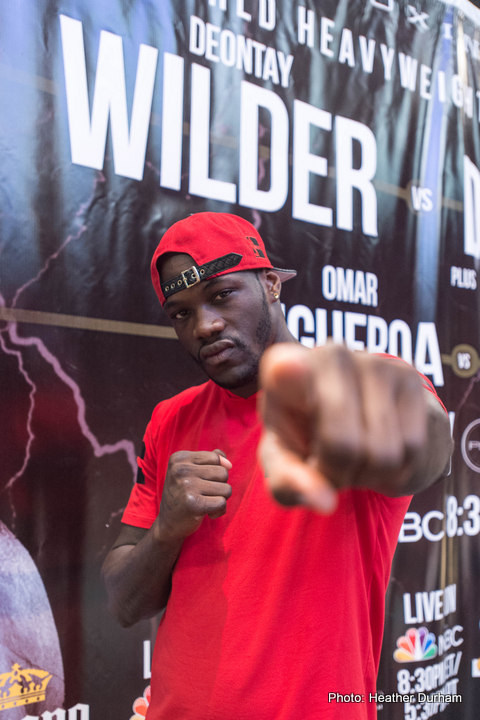 WBC heavyweight champion, Deontay Wilder, set for a reprieve from his showdown with mandatory challenger, Alexander Povetkin until April or May 2016, believes if he were to face Wladimir Klitschko tomorrow, he would emerge the victor.

Long dominant WBA/WBO/IBF champion, Klitschko, first defends his titles against Britain’s Tyson Fury on the 28th in Germany, yet if he emerges victorious from that fight as many expect, then it will inevitably mean he’ll go looking to capture the green belt once owned by older brother Vitali, in order to become undisputed heavyweight champion before he retires.

The winner of April/May’s Wilder/Povetkin clash will ostensibly mean little to Wladimir, who has already scalped the Russian consensus #2 in a one sided fight in 2013, and will enter a considerable favourite in any unification next year with Wilder, should the American manage to hold off Povetkin’s claim to his belt, of course.

“If it was tomorrow, I could beat him,” Wilder recently told Forbes.com about Klitschko.

“I’ve improved so much since 2012, and he’s declining. He’s getting older. He’s not going to be the same as he was. We know each other, and I know how to beat him.

“I know what it takes. He doesn’t have as much energy as I do. I’m the toughest, the strongest and the fastest heavyweight he’s faced.”

Wilder is now free to make another voluntary defence of his title before any showdown with Povetkin, who wasn’t ready for the mandatory January date, given he has this month beaten Mariusz Wach, back home in Russia.

Wilder’s team are desperate for a more credible opponent for his next fight – a January 16 date on US broadcasting giant, Showtime – after he was slammed across the board for defences against unheralded school teacher, Eric Molina and little known Frenchman, Johann Duhaupas earlier this year, making hard work of both as advisor Al Haymon attempted to build him in his Alabama home state on the PBC platform.

There are rumours Wilder could fight Ukraine’s unbeaten contender, Vyeschlav Glazkov (21-0-1, 13 KOs), who controversially beat Steve Cunningham on the Kovalev-Pascal undercard earlier this year, although nothing is officially confirmed as yet.