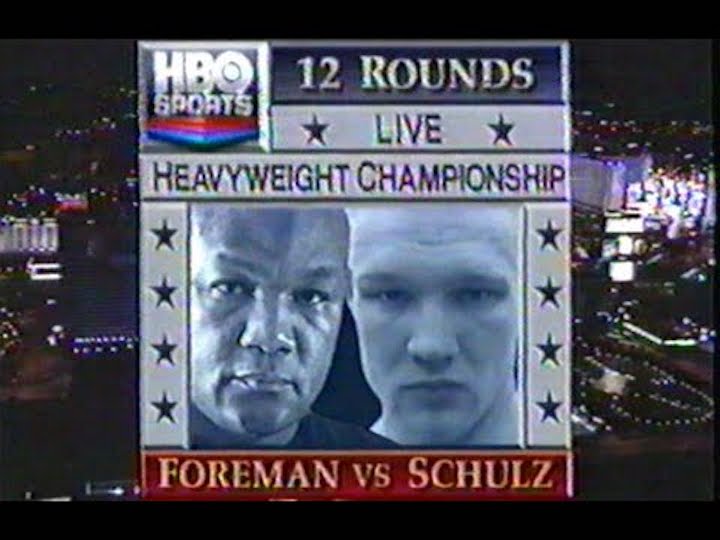 Here’s another big fight that deserves to be further scrutinized. At least the scoring of this fight qualifies for another look. It was 25 years ago today when heavyweight legend George Foreman made a return trip to The MGM Grand in Las Vegas – this the scene of the truly incredible 46 year old’s truly incredible title-regaining KO win over an unbeaten Michael Moorer six months earlier. Making the first defence of his second reign as heavyweight king, Foreman was deemed by all to have been fed a soft touch in the little known Axel Schulz.

The fight, dubbed “Celebration,” turned out to be anything but for Foreman, although the all-time great might have had the urge to party with the two judges who somehow scored the fight in his favor.

Schulz, young and ambitious and also a complete mystery of a fighter to anyone outside of his native Germany, had a good enough record at 21-1-1 (the loss coming on points to Henry Akinwande, so too the draw) but everyone expected Foreman to blow him out, perhaps then head into a super-duper-big-mac-fight with Mike Tyson. It didn’t happen.

Foreman, looking slower than ever and easier to hit, soon had his left eye swollen shut, this courtesy of the 26 year old’s fast and accurate right hands. Foreman was having such a tough time it was clear to see why he had dropped the WBA belt he had regained by shocking Moorer, not wanting to defend against Tony Tucker. Schulz was making Big George look bad, imagine what Tucker would have done.

Foreman kept plodding forward but he never managed to put a dent in Schulz. The defending champ did open up a cut on the forehead of his challenger, but Schulz was never hurt. It seemed the miracle win Foreman had pulled off in flattening Moorer would be his last. After the 12 rounds were done and dusted it was clear to all Foreman had been beaten. Out-punched, out-speeded and swollen up, Foreman had lost to Father Time, finally. Only he hadn’t.

Somehow, two of the three judges went through enough hoops to be able to come up with identical tallies of 115-113 for Foreman (the third judge not much better at 114-114 a draw). Schulz knew better than to scream robbery, instead stating how “If Foreman is the great champion I think he is, he will give me a rematch.” Now, nobody is denying Foreman’s greatness, but he failed to face Schulz a second time. Instead, George Foreman didn’t fight for well over a year (returning, for some reason, in Japan, against an even bigger no-name than Schulz used to be, in Crawford Grimsley).

Axel Schulz was now a big name; his April 22, 1995 efforts being enough in the opinion of almost everyone for him to have joined the great Max Schmeling as world heavyweight champion.

It was a bad night for Foreman 25 years ago today, and it was a hugely disappointing one for German boxing, and for Axel Schulz.