Never has the sport of boxing – itself an absolute market place of personalities, of hucksters, of cut throats, of con men, of promoters, of writers, and, of course, of great fighters – welcomed a man quite like Tony Galento. Known as “Two Ton,” the short and stocky slugger from New Jersey fought at heavyweight and Galento sure made his mark.

The sport of boxing has always been, and is littered with, what we call colourful characters; yet no-one comes close to Galento when it comes to character, colour, or toughness to back all of it up. 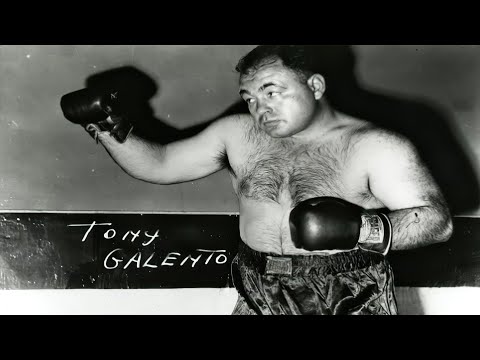 Born in Orange, New Jersey in March of 1910, Galento went on to become a fighter, a wrestler, a saloon owner, a TV and movie star, and ultimately, a legend. Listed (perhaps by himself) at 5’9,” Galento was actually a good deal shorter. Adept at aiming up with his shots and of chopping bigger guys down, Galento was far more than a fat guy who could absorb a shot. Going pro on his 18th birthday in 1928, Galento soon carved out a rep for being a tough, rough, dirty – as in shots to the groin, shots on the break, elbows chucked out, and the occasional head-butt – and capable fighter.

Famously training on a diet of beer, wine, hot dogs, burgers, spaghetti, and yet more beer, Galento appalled former heavyweight king Jack Dempsey into no longer training him. Ray Arcel, a true trainer of champions, was also aghast at some of Tony’s methods, as well as elements of his personality (“No-one really liked him, apart from the folks who drank at his saloon,” Arcel once said.)

But Galento rose through the ranks with wins over the gamest fighters of the day. At one point, this in May of 1931, Galento fought three times in one day, picking up two quick KO’s and then a points victory. Known by now for his astonishing ability to soak up punishment, Galento was an amazing 42-13-2 after just five years as a pro.

The stories surrounding Galento’s career are as fascinating as they are perhaps far-fetched. Did Galento really eat 50 hot dogs before a fight, this due to a bet – only to KO his opponent in round-four, this after being “unable to move for the first three rounds?” Did Galento really bite his tongue “nearly in half” during a fight, this as a result of him either neglecting or forgetting the use of a mouth-piece? Did Galento really show up for a number of his fights whilst drunk? Did Galento really so badly upset Joe Louis with, amongst other things, racial taunts, that he was able to get the most composed heavyweight king who ever lived to lose his patience and his cool before the fight?

What we do know is this: Galento, whether he was drunk or sober or somewhere in-between, managed to shake and then deck Louis in their brutal and thrilling 1939 slugfest. Galento, who was loaded with a wicked left hook, shook Louis early, then dropped him in the third. An angry Louis tore into his tormentor and, after a quite horrific barrage of spot-on accurate shots to the head, the heavyweight king got the stoppage win over a battered and bloodied Galento in the fourth.

But the Galento legend had been born, on the biggest of stages (check out the bloody fight, the red stuff belonging to Galento, on YouTube). Galento went on to taunt and to fight additional prominent heavies of the day, including – Lou Nova (a win) and Max and Buddy Baer (Tony losing to both).

Galento retreated to his bar, where he knew he could outdrink anyone, and he swapped the boxing ring for the wrestling arena. Galento also appeared in movies and on TV. In retirement, Galento was given the hero treatment by the great writer, W.C. Heinz.

Tony passed away in 1979, this after a struggle with diabetes, his legs being amputated.

Another story about Galento that is both funny and shocking is the one actor Jackie Gleason shared with Rocky Marciano on his chat show/TV spot of the early 1960s. Gleason spoke of the time he was appearing at a nightclub and was being heckled and heckled by what he described as, a “bald, stocky fellow in the front row.” Jackie was a tough guy himself back then and he paused the show, this after apologising to the audience, and he got his people to eject the heckler, so as to meet him outside the joint on Clinton Avenue – “So I can take good care of him,” Jackie told his audience.

Gleason, unbeknown to himself, squared up with Galento, a still adequately equipped former pro fighter, and he put his dukes up. “Now you’re going to…….” And that was it. “That’s the last I remember,” Jackie recalled. “The next thing I can recall, I was on the floor and the doctor was there.”

Never mess with Tony Galento. In terms of the most eternally colourful, entertaining and at times controversial characters from the world of boxing, “Two Ton” still wears the crown and no-one would dare try to knock it off his head.

The way Galento got his famed nickname is also if interest. Galento was not nicknamed “Two Ton” due to his portly frame, but due to the fact that he showed up late for an early career fight, this because he had, whilst working as a delivery guy, had to drop off two tons of ice before the fight.

Oh, and Galento also boxed, or fought – a bear, a kangaroo and, believe it or not, an octopus!

And we think guys like Tyson Fury, Tex Cobb and Wimpy Halstead are characters. 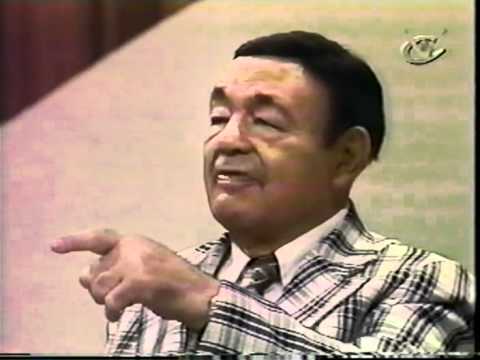