Though the fight was much maligned when it happened, or even before then; the critics having a field day when the fight was announced, today, the George Foreman-Gerry Cooney fight has something of a legendary element to it.

Foreman, at the time 19 fights deep into his unlikely comeback, was taking his first risk in facing Cooney, who was making a ring return himself; Gerry having ditched the booze and the outside influencers.

Going up against a big guy with a big punch, Foreman was, in the words of commentator Alex Wallau, “risking everything.” And Foreman was buzzed by a Cooney left hook in the brief fight that saw Foreman display pinpoint accuracy in taking Cooney down in impressive fashion inside a couple of rounds.

Later, as a guest on The David Letterman Show, the 41-year-old soon to be living legend stated to his incredulous host how Cooney was “the hardest hitter I’ve ever been in the ring with.”

Letterman was far from convinced.

“You only meet three genuine punchers throughout your career,” Foreman went on. “Gerry Cooney, Ronny Lyle, and a kid I worked with by the name of Cleveland Williams. And they hit so hard that it vibrates your body, even if you block it – it goes right through you. Cooney hit even harder than Joe Frazier with his left hook.”

Letterman was stunned. “Harder than Joe Frazier? What about Earnie Shavers?” Letterman asked. 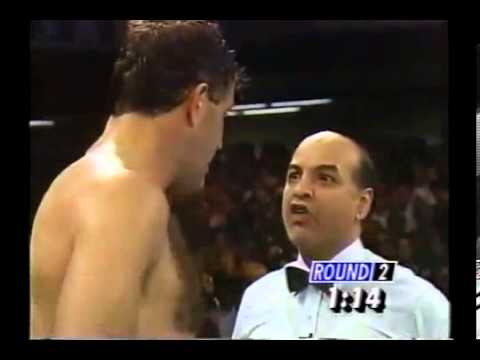 But Foreman was now a major pay-per-view attraction and the number of fans calling for a Foreman-Mike Tyson fight was being listened to very seriously. Foreman still had to take good-natured cracks from the Lettermans of the world but he was a regular face on TV, he was THE heavyweight boxer to root for, and Foreman had shown in the dismantling of Cooney (the fight took place 32 years ago today) that his power was very certainly still there, even at age 41.

So was George merely being kind to the fellow he’d just blasted out in “five terrifying minutes,” as British writer Colin Hart described Foreman’s handiwork against Cooney, or was he in fact serious? Surely Joe Frazier was a “genuine puncher?” But Cooney did have an awesome left hook as we know, and George was sporting a shiner during the Letterman appearance, so who knows? Cooney, we all agree, should have achieved way more than he did. On this day 32 years ago, plenty of experts were picking Cooney to defeat Foreman, thus ending “The Punching Preacher’s” comeback. But Foreman proved he was for real by taking Cooney’s left hand and then leaving his rival flat out courtesy of his own brutal uppercut. At least Foreman had proved himself to be for real in some quarters. Letterman still wasn’t buying it.