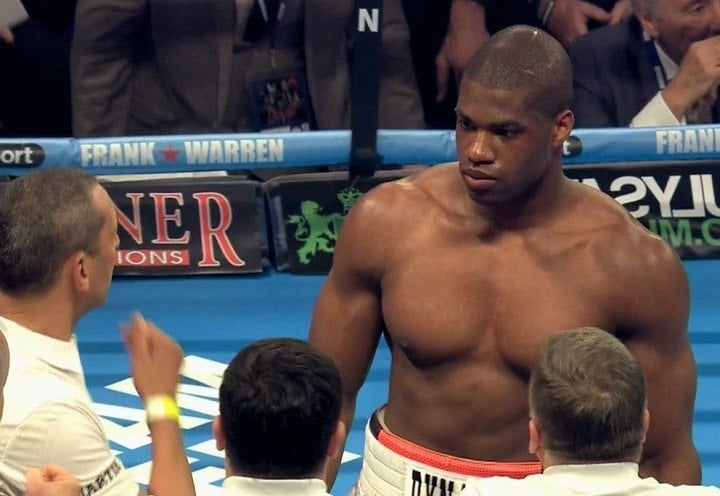 Top British boxing promoter Frank Warren has seen it all, and it’s fair to say it takes quite a bit to get him excited as a result. However, as he explained when speaking with Gareth A Davies of The Telegraph, Warren is very excited about his latest heavyweight signing: the unbeaten, 5-0(5) Daniel Dubois.

Warren says, without getting carried away, how he believes the 20 year old from London is “the best heavyweight prospect I have ever seen at this stage.” It’s no secret how Dubois, all 6’5” and approx 250 pounds of him, gave current WBA/IBF heavyweight ruler Anthony Joshua real problems in sparring (allegedly knocking him down, even dominating him behind closed doors) and Warren says he feels his new star “has Joshua’s number.”

Warren, when scoping the current heavyweight landscape, mentions another present champion as one he would have no problems putting Dubois in with sooner rather than later; in fact, in just five fight’s time:

“Look, I don’t go crazy about young fighters because there is always a long way to go – but he is by far the best heavyweight at this stage of his career that I have seen in my time in boxing,” Warren told Davies when talking about Dubois. “He has a fantastic jab, real power, he’s relaxed, a natural boxer and puncher. Not only did he knock Joshua down, he absolutely did for Joshua in the gym, as he has done with all the names he has sparred with. Do not worry about Joshua running out of opponents. I think Dubois could be ready in 12 months’ time. I’d put him in with [Joseph] Parker after five more fights.”

Warren again stresses how it’s early days for Dubois – who has yet to be extended beyond the second-round in his five pro outings, during which he has not faced any notable names, understandably – but he knows a good thing when he sees one. And Warren is not alone when it comes to holding Dubois in such high praise. Thanks in large part to the simply scary KO’s the Greenwich man has scored, where his smashed opposition has required oxygen from alarmed ringside safety personnel, Dubois is pretty high on everyone’s list of prospects right now.

It’s certainly proving a tough job matching the power-puncher. On the one hand, Dubois cannot go in with the elite (yet), but on the other, he cannot face opposition he knows going in he will despatch in mere seconds. Maybe as Warren says, Dubois will indeed be challenging for a major title next year some time.

Next up for Dubois is tough Welshman Dorian Darch, 15-5-1(1) in December. But Dubois may get himself another fight (or even two) before then.