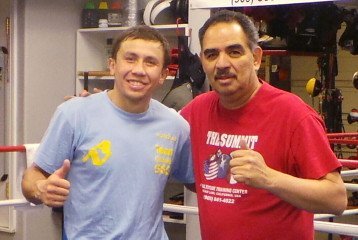 He fights David Lemieux in New York later this month, yet Gennady Golovkin’s trainer Abel Sanchez has refused outright the notion that the team collectively turned down a fight with California’s Andre Ward at 168lbs, insisting that the Oakland based “Son of God” is nothing more than a liar out to stay relevant by using Golovkin’s name.

WBA (sup) 168 lb champion Ward, who has been struggling to meet the super-middleweight limit in recent times, returned in June at a 172lb catch-weight against Britain’s Paul Smith and had recently referred to Golovkin as “Little-g” in the media, claiming the destructive middleweight champ wanted no part of fighting him – a notion Sanchez angrily refutes.

“Andre’s a liar and I’ll say it on the air,” Sanchez told fighthype.com. “Andre talked all that AFTER we had signed to fight Lemieux. He was offered many things before that and never came out and said he wanted to fight.”

“Go back and look at the records. The fight against Lemieux was [already] signed and THEN he comes out and says that! The guy don’t wanna fight and not only that, he was up at [1]72 for his last fight, so he’s just a guy that is trying to use Gennady’s name.”

Golovkin headlines his first HBO PPV on the 17th of this month in a big unification with IBF champion Lemieux, and Sanchez acknowledges that the balance of power has shifted since Ward had 19 months out of action before the fight with Smith. He was the bigger name, the ‘A-Side’ back then, though not any more.

“Andre needs to concentrate on what he’s doing and get some relevant fights so that maybe he’ll be in the position to be able to talk about fighting Gennady,” Sanchez added.

There is still a chance that Ward will next appear on the undercard of next months Cotto/Canelo mega fight in Vegas, given that he shares the same Roc-Nation Sports handlers as WBC middleweight champion, Cotto, although this is still unconfirmed at present.

A sought after fight the fans desire for the former Olympic gold medalist would be a 2016 match-up with dominant 175lb champion Sergey Kovalev, a fight Kovalev’s promoter Kathy Duva has said is realistic for next year.