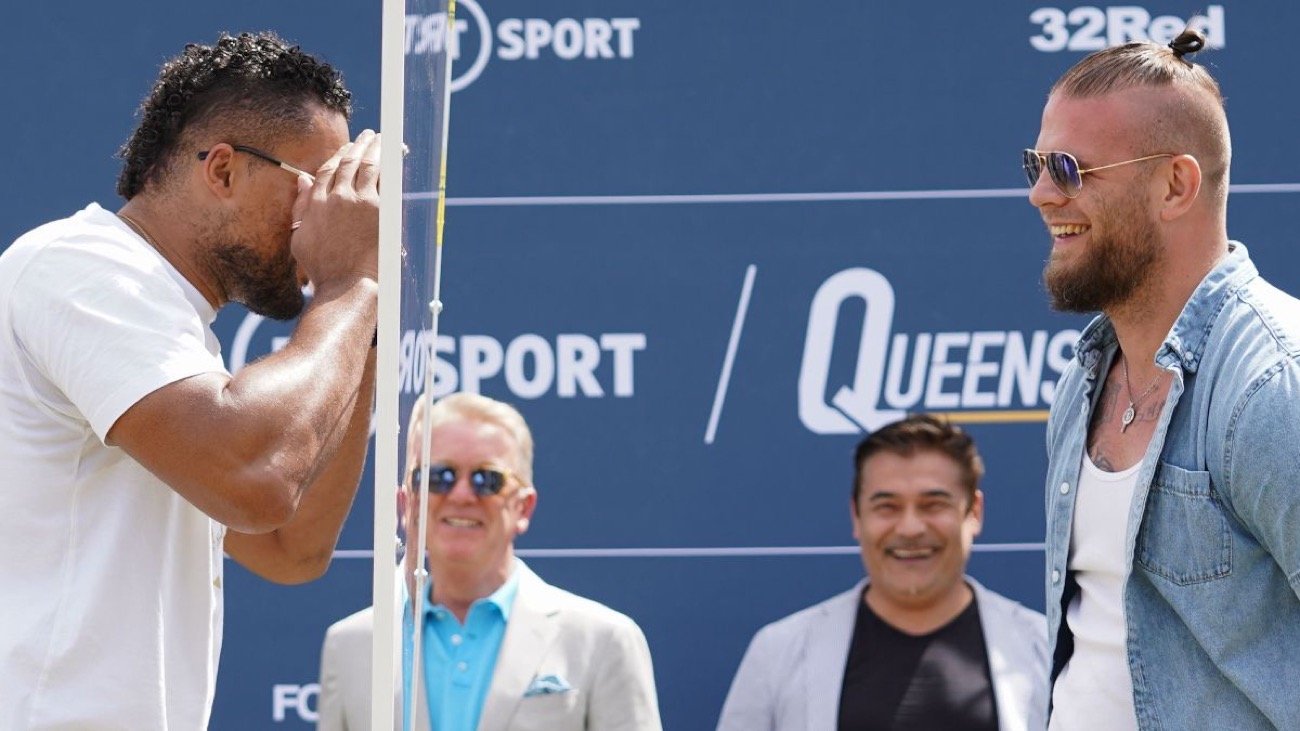 JOE JOYCE will fight a man on a mission on Saturday night as German Heavyweight Michael Wallisch has again stated his intention to derail The Juggernaut’s journey to the O2 Arena and Daniel Dubois.

All that will be left then is for Daniel Dubois (14-0, 13KO’s) to beat Wallisch’s teammate Erik Pfeifer (7-0, 5KO’s) on August 29th and the huge domestic showdown between ‘Dynamite’ and Joyce will be booked.

Both German’s were in town for a press conference yesterday hyping their upcoming fights with their British opponents and Wallisch made clear he intends to kill any hopes of the all-English clash later this year.

Introducing himself to the UK audience he said: “My name is Michael Wallisch, Heavyweight Division of Germany, and i’ve come to f*ck up the fight.”

Amateur standout Erik Pfeifer echoed that sentiment by saying that he was “here to beat Daniel Dubois.”

The pair are stiff challenges for Dubois and Joyce, with many saying that Dubois’ opponent in particular represents the toughest challenge of Daniel’s short career.

Veteran Wallisch understands the British fans’ hunger for the ‘Seek and Destroy’ branded scrap between the two Frank Warren Heavyweights but insists his and Pfeifer’s eyes are on the biggest prize in all of boxing.

“The plan is to ruin the fight between Dubois and Joyce. We’re thinking about which of us is winning, who’ll fight the other guy (in October) and then the winner wants to fight Tyson Fury in England.”

Both Dubois and Joyce were on-hand yesterday but at times seemed more motivated by staring each other down, and Wallisch believes that complacency could be what costs Joe on Saturday night.

“He should never underestimate me.

Pfeifer, who had a stellar amateur career that took in two Olympic games, two World Championship Bronze medals and two victories over Tony Yoka, doesn’t believe that Dubois knows what he’s up against when the pair touch gloves.

“He’s a stepping stone in my way and I’ll push him aside.”

Pushed to give a prediction for this Saturday night when Wallisch and Joyce collide, confident Pfeifer simply said: “Wallisch will win.”

Despite their dastardly intentions to spoil British boxing’s biggest party, Wallisch looks forward to fighting in England as he recognises it as one of the great boxing markets in the world.

“We love to fight in England. England is one of the best countries to fight in.”

That said, English fans should expect no favours from their European cousins.

“The Germans are coming. And we will win.”

Wallisch (23-3, 13KO’s) faces unbeaten Putney bruiser Joe Joyce (10-0, 9KO’s) next Saturday, live on BT Sport 1 at 7.15pm, and the Munich man fully intends to derail ‘The Juggernaut’ before moving on to Daniel Dubois in October and then an unlikely showdown with ‘Gypsy King’ TYSON FURY.

“Joe Joyce is a solid boxer. He was a good amateur, but I think Dubois is already in his head” said Wallisch, “When I win this fight, i’ll fight Dubois in October.”

“I think both fighters are strong heavyweights. Tyson Fury is the name everybody wants and he’s with Frank Warren.

Wallisch makes his ring return on Saturday on the second UK behind-closed-doors show to be held post-lockdown and will share the bill with some of the brightest talents in British boxing, including Ekow Essuman, Denzel Bentley, Chris Bourke and Louis Lynn.

Despite his intentions to disrupt the British Heavyweight scene, Wallisch insists he can’t wait to fight on these shores.

“I look forward to coming to Great Britain. I love the way UK fans celebrate boxing and the respect they have for the athletes.”

Preparing for the fight in his native Germany has proved as tricky as it has for any UK fighter, because of the coronavirus restrictions over the last few months, but Wallisch doesn’t expect it to have any impact on his performance.

“I’ve been keeping in shape, of course. In Germany you couldn’t train in the gym for a long time, but now it’s fortunately possible again.

“I’m looking forward to the fight, even if the preparation time was short.”

Joyce vs Wallisch is live on BT Sport 1 at 7.15pm on Saturday July 25th