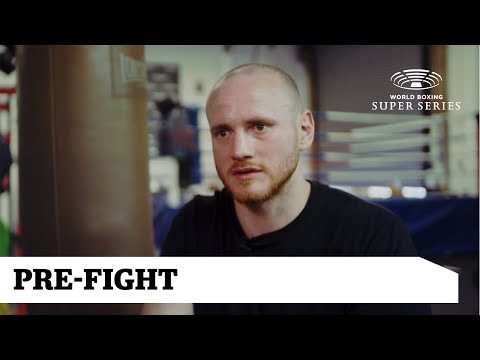 “We are supremely confident,” says Groves in the Pre Fight Documentary.

“We are not underestimating him the slightest, but I believe I’ve seen enough of him to put together a winning formula.”

George Groves tells that taking home the Muhammad Ali Trophy in the inaugural season will eclipse everything he has achieved in his impressive career.

“This tournament, even a year on, has captured the public’s imagination. Everyone has got behind it, everyone is enjoying it, ” says Groves.

“It’s the first of it’s kind and will it grow to something way beyond what is now. Winning it will be the pinnacle of my career.”

The opponent, Callum Smith, is living the dream these days. The WBC Diamond belt holder has his first shot at a World title after being in mandatory positions over the last few years.

“Since the day I turned professional I’ve been dreaming about becoming world champion and I finally got that fight now,” says Smith.

“I’m excited, I’m enjoying coming to the gym, enjoying the sessions, it’s everything I ever wanted since turning pro. I know I will deliver. There is no bigger time to deliver than in the World Boxing Super Series Final against George Groves.”

On the line in Jeddah: The Muhammad Ali Trophy, the WBA Super World Championship, The WBC Diamond belt and the Ring Magazine belt. Only Joe Calzaghe and Andre Ward have ever held The Ring title at 168 lb.

Boxing fans with Visa for Saudi Arabia or situated in the country can buy tickets via sauditickets.sa/en

Al-Qahtani thrilled with slot on WBSS final in Jeddah

Zuhayr Al-Qahtani is preparing to fight in his native Saudi Arabia for the first time on the undercard of George Groves vs. Callum Smith and believes this is just the first of many big nights there.

‘The Arabian Warrior’ (4-0) expects to draw a significant crowd on the undercard of the World Boxing Super Series super-middleweight final having cruised to a quartet of victories in London to kickstart his professional career.

Al-Qahtani, who faces Giorgi Gviniashvili said: “To be part of such a card is extremely exciting. I believe this is history of the highest level being made. I understand how big it is – it’s an extraordinary feeling.

“It’s great to be boxing in front of my home crowd, my family and my fanbase. This is just the start and in a way, this is where it all starts for me.

“I’m learning not to let my emotion to get the best of me. I was late on the bill in my last fight and I feel I didn’t perform how I should. This opponent I’ve got ahead of me will bring my name up and you’ll see improvement.

“I believe we can have a major showdown next year – I’d like to fight for the Asian title. I won’t look past this opponent though and once I get the job done, we can look deep into it.”

For those passionate boxing fans who can’t watch the fight ring-side, Vue will be screening the WBA super-middleweight title showdown between George Groves and Callum Smith live at venues* across the country on Friday 28th September.

Smith is entering the fight unbeaten and in a bid to become Britain’s new No. 1 super-middleweight. The two will go head-to-head for the Muhammad Ali Trophy, the Ring Magazine belt and the WBA ‘Super’ world title at the King Abdullah Sports City in Saudi Arabia.

Enjoy the ultimate big screen experience, with every hook, upper-cut and jab screened in high-definition.

Vue is working with ITV Box Office to screen the fight, and the coverage features Mark Pougatch hosting in Jeddah, commentary from Ronald McIntosh and Richie Woodhall, with analysis from Duke McKenzie.

To book tickets and for further information, please visit www.myvue.com.