Eddie Hearn says Anthony Joshua will be “much better” for the rematch with Oleksandr Usyk in the first quarter of 2022 in the UK.

Joshua (24-2, 22 KOs) had the wrong game plan last Saturday night, getting beaten by the better boxer Usyk (19-0, 12 KOs) by a 12 round unanimous decision at the Tottenham Hotspurs Stadium in London, England.

Joshua was winning the fight through the first eight rounds, but the wheels came off in the ninth when he suffered a right eye injury.

From that point on, Usyk took control over the fight and swept rounds nine, ten, eleven, and twelve to get the victory.

Hearn wants the Joshua vs. Usyk II rematch to take place in February in the UK.

He isn’t saying anything about whether Joshua will sack his training team, but many boxing fans believe AJ needs to replace his lead coach Rob McCracken and get someone different.

Hearn expects Joshua to be better

“AJ, I promise you, he will be much, much better than that in the rematch,” Eddie Hearn said in predicting a better performance for Joshua in his next fight with Usyk. “He boxed okay, but not to the level he can box.”

“It’s not the fight I imagined and not the fight that I hoped for, but also I was very aware of what could happen if you fight people like Oleksandr Usyk,” said Hearn to Boxing Social on Joshua’s loss to Usyk.

“If you fight pound-for-pound greats, you can get beat if you don’t get it right,” Hearn continued. “I think tonight was a mixture of AJ not getting it right and Usyk being brilliant.

“A career-best performance from him and a deserved winner. That’s what happens sometimes in sport. You get beaten by the better man, and Usyk was 100% the better man tonight.

“Of course, he should have applied more pressure, worked his way behind a jab, and cut him off a little bit and worked the body.

“Every time he [Joshua] hit him to the body, he hurt him, and he hurt him a couple of times to the head, but there wasn’t enough of it.

“After eight rounds, he was ahead on the scorecards, and Usyk just went nine, ten, eleven, twelve, a clean sweep.

“Those are the championship rounds, and he secured the fight. He had a brilliant finish, and he won the fight. He was an unquestionable winner.

“AJ can do so much better than that, so much better, but it was also the brilliance of Oleksandr Usyk. So you can’t take anything away from him. He’s [Joshua] just got to improve and come back stronger,” said Hearn.

Joshua can’t help but get better from this fight because he showed that he could go 12 rounds against Usyk, and he now knows how to fight him.

In the fifth and sixth rounds, Joshua looked like he was on his way to a knockout victory. AJ slowed up a little in the seventh and eighth, which allowed Usyk to stay in the fight.

AJ was more tired than hurt in the 12th

“It was more tiredness for me,” said Hearn when asked what was going through his mind when Joshua appeared to be hurt in the final seconds of the 12th round.

“I thought he done his orbital, but he hasn’t. It’s fine. That was a big concern of mine. To be honest with you, when you get to the stage, and you’re in the twelfth round, he’s knackered.

“I think Usyk hit him with one shot that actually really busted, which was the huge left hook early on in the fight [in round three].

“But it wasn’t as if he  [Joshua] was getting repeatedly buzzed and knocked over and stuff like that. It was just the accuracy of Usyk and the work rate.

“He was brilliant, Usyk. You just have to take your hat off to him. That’s why it’s easier to take. It’s horrible, but at the same time, we lost to an amazing fighter,” said Hearn.

AJ looked very tired in the final 15 seconds of the 12th round when Usyk turned it up, the head suddenly on him.

Joshua’s legs looked rubbery from the exhaustion of the fast pace of the previous 11 rounds. But once Joshua stabilized himself against the ropes by leaning on them for support, he looked fine in the final seconds of the contest.

Joshua will be the underdog against Usyk

“The [Andy] Ruiz one was sick because we were flying on the crest of a wave,” said Hearn about it being a bitter pill to swallow for Joshua to lose to Andy Ruiz Jr. in 2019.

“We thought he [Joshua] was unbeatable, and it was one of the biggest upsets in heavyweight history.

“We know Ruiz can fight, but Usyk has a higher pound-for-pound rating than AJ.

“Obviously, it’ll be next,” said Hearn when asked about the Joshua vs. Usyk rematch.

“Usyk has a horrific cut and a couple of busted-up eyes. AJ has a busted-up eye. He wants to get back to the gym.

“I think because of the commercial obligations. I feel like AJ has been a little inactive, and I think especially with the pandemic, you’re looking at December 2019, he boxed Andy Ruiz,” said Hearn about Joshua’s inactivity.

“It’s going to be a really tough fight,” said Hearn of Joshua, facing Usyk in a rematch in early 2022. “Underdog, first time in his career, I believe he’ll be.

“I think he [Joshua] was a slight underdog in the Klitschko fight, but that’s the quality of Usyk. AJ is going to have to be much better to beat him,” said Hearn.

Losing to Andy Ruiz Jr. obviously was a tough fone for Joshua because he wasn’t highly rated like Usyk, and he wasn’t expected to do well.

Joshua said himself last Saturday night that he’s not too bothered about him being the underdog for the rematch with Usyk. He’s going to prepare to the best of his ability and go out and win the fight.

Being the underdog for the Klitschko fight in 2017 didn’t impact Joshua’s performance, as he went out and stopped the former champion in front of a large crowd at Wembley Stadium. 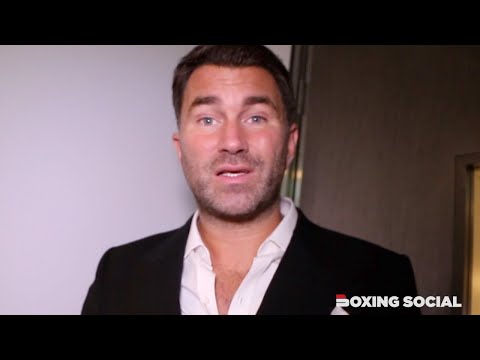