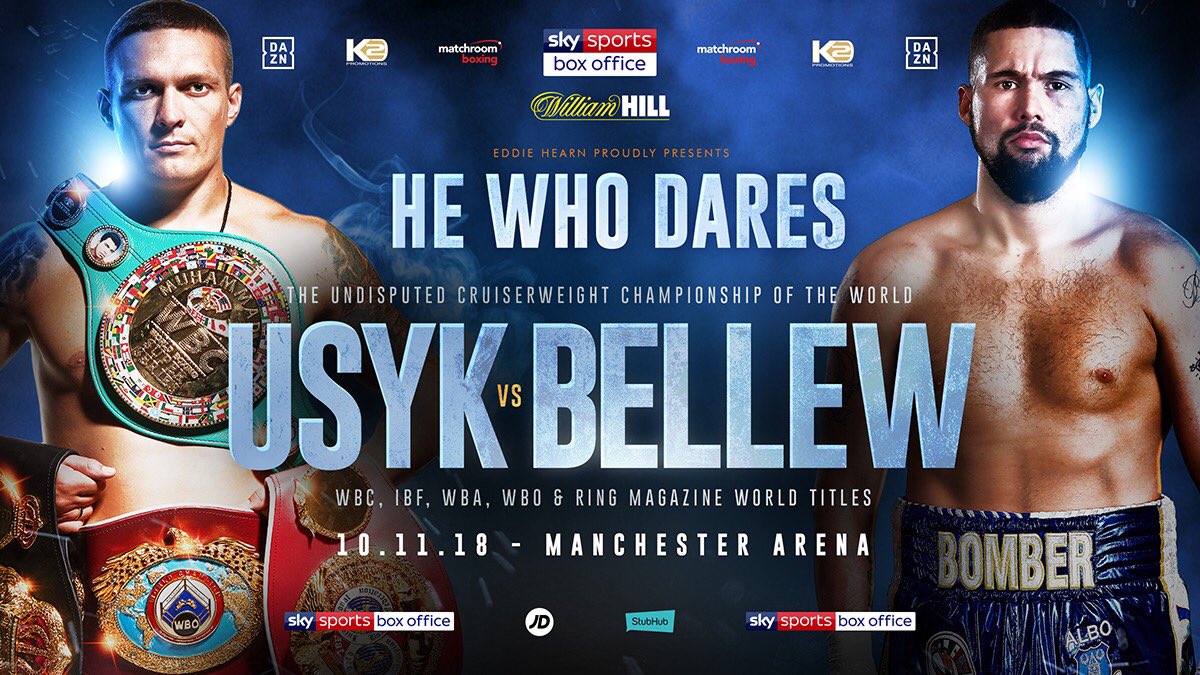 Undisputed Cruiserweight World Champion Oleksandr Usyk will defend his WBC, IBF, WBA, WBO and Ring Magazine belts against Tony Bellew at Manchester Arena on November 10, live on Sky Sports Box Office in the UK and DAZN in the US.

The 31-year-old won Olympic, World and European amateur golds before steamrolling his way to the top of the Cruiserweight division after only 15 fights, but former WBC World Champion Bellew believes he will become the first man to beat Usyk on November 10.

A glittering career has seen Bellew win British, Commonwealth, European and World titles, and the Liverpudlian warrior is aiming for a fairytale ending in Manchester, hinting that this could be his final battle before he retires.

“I’ve been preparing for this fight for a long time and I’m delighted that we’ve got the venue and the date finalised – I cannot wait to fight in the UK,” said Usyk. “I am deep into my training camp with my team, working hard and preparing for a long fight with Tony. He says he will beat me and I love his attitude, but you cannot beat-up somebody who is invisible in the ring! As always, I will be victorious on Nov 10.”

“This is the ultimate test for me,” said Bellew. “There is no greater test than Oleksandr Usyk, he is one of the most feared men in boxing. This is nothing new to me, everyone says that I can’t do it again. Everyone is saying that I’ll get beat-up quickly, but we’ll find out won’t we.

“Make no mistake, I know this is the most dangerous fight of my life but I’m also going into this with my eyes wide open, I’m not in awe of Usyk. I won’t stand and admire him and allow him to rattle off five-punch combinations on my head.

“I’m going into this fight with absolutely nothing to lose because the whole World thinks I’m going to get smashed. I have everything to gain and nothing to lose. On November 10 I’m going to do something that nobody has ever done before, I’m going to knockout an undisputed Cruiserweight Champion of the World.”

“It’s an absolute honour to promote Britain’s first ever undisputed title fight in the history of the sport,” said Eddie Hearn. “This one of the biggest and best fights in boxing with Tony Bellew daring to be great against one of the top pound-for-pounders in the sport in Oleksandr Usyk.

“Tony has won British, Commonwealth, European and World titles and after the two big wins against David Haye we felt it might be time to walk away, but with him constantly improving and the lure of becoming undisputed king, the temptation was too much. For Oleksandr, the plan is to finish his chapter at Cruiserweight on November 10 and then move up to Heavyweight where he will chase a fight with unified World Champion Anthony Joshua. This is going to be a thrilling fight on a huge night of boxing in Manchester – November 10 can’t come soon enough!”

“I cannot wait for this fight,” said Alex Krassyuk of K2 Promotions. “Two lionhearted warriors will collide for all of the Cruiserweight World titles. This is fight that the World has been waiting for and I’m delighted to be part of history in the making.

“Many experts don’t give Tony a chance in this fight but he has proved many times that being an underdog does not mean being a loser. I can’t see Usyk having an easy walk in the park on November 10. This is the biggest opportunity of Tony’s career and he has nothing to lose, this makes him very dangerous.

“All of our focus is on Tony Bellew and November 10 but once Usyk defeats him he will be targeting the king of the Heavyweight division, Anthony Joshua.”

Anthony Crolla says his best is still to come as he prepares to take on Daud Yordan in a final eliminator for the WBA Lightweight World title on the undercard of Tony Bellew’s undisputed Cruiserweight clash with Oleksandr Usyk at Manchester Arena on November 10, live on Sky Sports Box Office in the UK and DAZN in the US.

‘Million Dollar’ returns to his second home for the first time since his win over three-weight king Ricky Burns in 2017 and the 31-year-old is aiming to steal the show with another memorable performance in front of a packed-out arena.

A former World Champion, Crolla is eager to reclaim his WBA World title currently held by pound-for-pound star Vasiliy Lomachenko, and would welcome a huge clash with the Ukrainian in 2019, despite the prospect of heading into that fight as a huge underdog.

“Daud Jordan is a very dangerous opponent,” said Crolla. “He’s been in and around World Class operators for a number of years. He’s won 38 with a lot of knockouts and lost 3. If I’m not at my best, he’ll turn me over so I’ve got to raise my performance levels and win this which will open the door for another World Title shot.

“Joe thinks this is going to be a long, hard and brutal fight so in sparring we’ve tried to be smart so I’m fresh for fight night. The styles will gel and I’m sure it’ll be a great fight.

“I can’t fight on emotions and try to be the hero. It’ll come down to pedigree but I know all in all it’s going to be tough in there. I’m confident I’ve put in the hard work in camp which will help me be victorious on the night.”

Crolla enjoyed a rollercoaster ride as WBA king at 135lbs, he finally got his first shot at the title in July 2015 against Darleys Perez in Manchester but was edged out in a controversial draw.

The pair rematched in the same venue five months later and Crolla took his second chance out of the judges’ hands with a stunning 6th round KO from a brutal body shot. Crolla delivered the same salvo against dangerous mandatory challenger Ismael Barroso in in May 2016 to halt the Venezuelan in round seven.

That win led to a keenly fought pair of unification battles with Jorge Linares that the visitor won, but Crolla insists he can still deliver on the World stage.

“I believe I graft as hard as anyone out there,” he added. “It’s in my make up to be honest, I know I’m not the most talented fighter out there, I never have been and I never will be but I know I have to make up for it with hard work.

“My motivation every morning is my little boy, family and those who pay money to come and watch me. It’s a World title final eliminator in my home town; if I can’t get up for that I’m in the wrong sport. It’s a short career, these nights don’t come around too often and when I’m out I’ll miss them dearly.

“I’m not a young man anymore but I genuinely believe the best of me is still to come. Joe thinks I’m boxing better than ever. All the numbers I hit in training are on the rise. I’m nearly 32, the body comes under stress at times but I’ve looked after myself and I’m ready to go into the trenches again next week.”

Ricky Burns and Scott Cardle meet on the undercard of Tony Bellew’s undisputed Cruiserweight clash with Oleksandr Uysk at Manchester Arena on Saturday November 10, live on Sky Sports Box Office in the UK and DAZN in the US.

Burns created history in Scotland in May 2016 when he defeated Michele Di Rocco in Glasgow to land the WBA World Super-Lightweight title and become the country’s first ever three-weight World Champion.

The Coatbridge star successfully defended the crown against tough mandatory Kiryl Relikh in Glasgow in October 2016 before falling short in a unification battle with IBF king Julius Indongo in April.

He won his 50th fight as a professional in June, stopping Croat Ivan Njegac after four rounds and returns to the scene of his points loss to Anthony Crolla determined to prove he still has big ambitions at World level.

“There’s some big fights to be made in the Lightweight division and a win here in front of such a large PPV audience will put me further in the frame for next year,” said Burns. “The Manchester crowd last time out was fantastic and obviously Anthony Crolla is fighting on the bill, I’d still love that rematch down the line but first and foremost Scotty has my attention for next Saturday.

“I get on really well with Scotty and his family. They have helped me out with some sparring down the years but this is strictly business. It was a shame my gym mate Joe Cordina pulled out through injury but this is boxing. I’ll shake Scotty’s hand before and after the fight.

“Training has been going well, I’m always keeping busy in the gym waiting for the phone to ring. It doesn’t matter who I fight, I train for every fight the same so the short notice doesn’t change anything drastically in terms of our preparation. These domestic dustups get the fans excited and it’s a great show to be fighting on.”

“This is a huge fight to get me back to where I want to be,” said Cardle. “Ricky is a former three-weight World Champion and a Scottish great, a win against him would hopefully set up some even bigger fights down the line.

“This is a massive occasion for me, I’ve got the opportunity and now it’s time for me to deliver. I can’t turn fights like this down, especially at this stage of my career. The short notice isn’t ideal but I’ve trained hard for the Cordina fight and I’ll be ready next Saturday.

“Ricky is a very physical fighter, he’s got a great jab and he’s been in there with the best. He’s one of the toughest men in the sport and I’m prepared to go the distance with him. I’ll need to stay smart and use my speed on the night.

“I’m getting to a certain age now and I want to be able to look back on my career and be happy with what I’ve achieved. I want to reach World level before I call it a day and a win over a name like Burns could be the start of something big”