WBC heavyweight champion Tyson Fury stands to lose a $100 million+ payday for a potential fight against the winner of the Anthony Joshua vs. Oleksandr Usyk 2 rematch in 2022 if he loses his trilogy match against Deontay Wilder on October 9th.

Fury (30-0-1, 21 KOs) has avoiding the fight with Deontay Wilder for close to two years. The Gypsy King tried to get out of fighting Wilder a second time despite having a contractual rematch.

Fury doesn’t want the fight with Wilder, and that’s why he tried so hard to squirm out of it. I mean, there’s a lot of risk involve for Fury, and knows he’ll lose a $100 million+ payday against Joshua if he gets put to sleep again by Deontay.

Fury was forced to be here after the U.S arbitrator to honor his rematch clause. If Fury chooses to pull out of the Wilder fight, he would lose million upon millions.

Fury was knocked out cold by Wilder in 2018, and he was lucky to get through their rematch in 2020 without going to sleep for a second time.

Wilder just barely missed Fury with a few devastating right hands before his legs were taken away in the third round from a clip to the side of the head.

“When we first talked, me and Tyson [Fury], about the game plan for the fight, he told me he wanted to beat him. For me, I was, ‘Okay, I can do that, but how about we do it this way,’ and it was by knockout,” said SugarHill Steward to BT Sport Boxing on his game plan for the second Deontay Wilder fight in 2020.

Read:  Tyson Fury Tears Into Usyk, Joshua – Says He Will Be Fighting Dec. 3rd, Joshua Or Not

“I know what Tyson can do, I know what he’s capable of, and I know his mental makeup,” Steward continued. “Like I said, me and him get along really well, so teaching him was never a problem in the past.

“It wasn’t a problem going into that second fight with Deontay Wilder, and I just told him the game plan. When I got done telling him how I saw the fight and what he should do to win that fight and get a knockout, all Tyson said was, ‘YEAH.’

“I believe from that moment on, there was never any doubt or question he was going to do but listen to me,” said Steward on what Fury’s mind frame going into the rematch with Wilder. “He came out and went straight into the game plan.

“He came out and started boxing strong, and he continued to box strong right up until the towel was thrown in. Two nights before, we were in the house, and I kind of gave.

“I’m kind of a semi-actor on the Denzil Washington level kind of sense. I gave a full cap of the fight of what it’s going to be like.

“Those that were there knew exactly how it was done just as I showed it a couple of nights before,” said Steward on the game plan for Fury to follow against Wilder.

Fury revealed this week that he learned from his 2018 fight with Wilder that he could outslug him after he was dropped in the 12th.

Even if SugarHill hadn’t designed a game plan for Fury to take the fight to Wilder, the ‘Gypsy King’ likely would have done so anyway.

It’s interesting that SugarHill is giving himself credit for what Fury would have done on his own without him telling him. That style worked against Wilder, but it’s not one that will help Fury every time out.

If SugarHill assumes that Fury can go straight at all of his opponents, he’s going to get caught with a big headshot eventually and knocked out.

It won’t be a big shock to fans if Wilder poleaxes the overly aggressive Fury on October 9th. If that happens, we’ll have to see what SugarHill says about his great game plan.

Also, we’ll see if Fury keeps SugarHill as part of his training team or if he dumps him as he did with Ben Davison.

Fury will have to blame someone for his loss to Wilder, and SugarHill would be a convenient target because it was his idea to go into the teeth of Deontay’s offense.

“I didn’t find any difficulties planning for this camp,” said Steward on Fury’s preparation for his trilogy match with Wilder on October 9th. “We just put it together, and we knew what needed to be done.

“It was simple. Let’s just start training, and we’ll keep it all private; that was it plain and simple. I don’t know what else to say about it,” Steward said about Fury’s camp for the Deontay third contest.

“On October 9th, Tyson Fury knocks Deontay Wilder out! That’s how it’s going down. It’s going down like that,” predicted SugarHill for Fury’s trilogy match against Deontay.

If Fury pulls out of the fight with Deontay, he could lose $80 million in damages along with the huge purse that he’s getting for the match.

For the trilogy match, Fury will enjoy a 60-40 split over Wilder, which could see ‘The Gypsy King’ walk away with $60 million regardless of the outcome.

It’s a win-win for Fury no matter how the fight turns out for him, but obviously, he wants to win because he’s got the big $100 million+ payday against Joshua he’ll be enjoying.

SugarHill’s prediction is right along the same lines as many boxing fans because they don’t think Wilder will be able to keep Fury off.

Once Fury takes the fight to the inside, Wilder has no ability to compete at close quarters.

What danger about this fight is that Wilder’s trainer Malik Scott might be hesitant in throwing in the towel if his fighter starts taking a beating from Fury.

Wilder fired his former trainer Mark Breland for throwing in the towel to save him last time, even though it was the right thing to do.

Hopefully, the referee steps in and halts the contest if Fury starts battering Wilder against the ropes like he did last time. 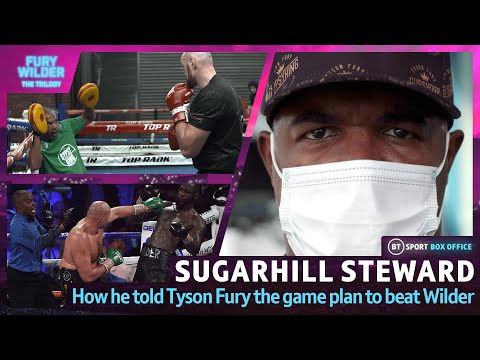