Though the month of October saw the great Muhammad Ali do many great things – Ali turned pro in October, he began his epic ring return after being banished due to his refusal to serve in Vietnam in October, Ali gave us THE greatest heavyweight fight of all-time in October, and of course, Ali regained the crown by beating the “invincible” George Foreman in the month of October – the tenth month of the year also saw a faded (as in badly, severely damaged as well as faded) Ali try and do the impossible.

It was on October 2 in 1980, when a 38-year-old Ali, already suffering from the symptoms of Parkinson’s disease if not yet diagnosed with the horrific ailment, went for the impossible. Dubbed “The Last Hurrah” (and it would not have been had Ali won; this man, born to fight, was never going to stop until he was badly beaten), Ali’s challenge of an unbeaten, at-his-peak Larry Holmes remains the most tragic, hard to watch prize-fight ever.

Ali, who had all manner of coordination issues and was suffering from brain damage, kidney problems and was noticeably slurring his words, was nevertheless somehow cleared to fight Holmes by the good folks at The Mayo Clinic.

As Ali’s former doctor Ferdie Pacheco said many times years later – everyone involved in the Ali-Holmes fight “should have been arrested” (Pacheco has walked away in 1977, after Ali’s brutally punishing fight with the extremely heavy-handed Earnie Shavers; Ferdie noting, among other things, how Ali’s kidney was “falling apart.”)

Ali had gobbled up a ton of thyroid pills in the lead-up to the Holmes fight; Ali was famously treating the things as though they were quite literally vitamins. Ali looked great on the outside, his weight its lowest in years, his hair dyed black. Yet inside, Ali’s internal organs were screaming in pain – and this was before he stepped into the ring in Las Vegas. Pushing himself through workouts and sparring sessions where the great man looked nothing short of pitiful, his reflexes dulled, and his energy levels at a low, Ali must have known himself that he had no chance against his former sparring partner. 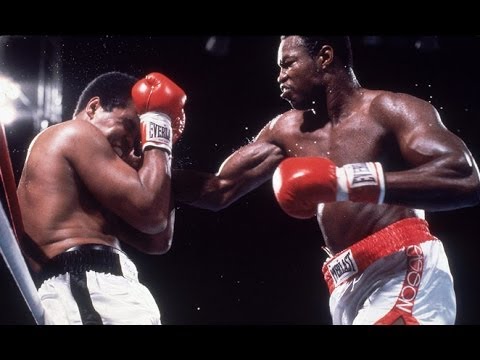 Holmes, two-and-a-half years into his reign, knew everything about Ali, Larry having soaked it all up during his tenure in Ali’s service. Holmes not only knew how Ali fought, his tricks, his strengths, and his weaknesses, he also knew Ali, the master psychologist. Indeed, Holmes fell for none of Ali’s mind games, and as for Ali’s poems and once stinging trash-talk barbs, Holmes could finish off Ali’s lines before he could do so himself. Ali was willing to hurl some X-rated language Holmes’ way as the two got in the ring at Caesars Palace. Ali, faking wanting to attack Holmes before the bell, his team “holding him back,” repeatedly yelled at the defending champion, “I’ll f**k you up! I’ll f**k you up!” Holmes appeared unfazed.

Ali was in big trouble going into the Holmes fight, and those closest to him knew it. All these years later, and it’s still astonishing to think this fight was allowed to go ahead. Why didn’t Herbert Muhammad put a stop to it? Surely Ali would have listened to HIM? Why didn’t Angelo Dundee and Bundini Brown say no to the great man, telling him there was no juice left in the fruit? Ali’s biggest problem was his sheer, enormous, unparalleled fame and stardom, along with it his all-conquering influence and the ability to do anything he pleased. Who was going to tell Ali no? Nobody.

Also, even experienced, they-should-have-known-better boxing people such as Howard Cosell had an almost unshakable faith in Ali. He WOULD find a way to win. He would not let them down. After all, Ali was a genuine miracle man, having “shook up the world” with wins over giants Sonny Liston and George Foreman.

“I wouldn’t come back now if I thought I’d go out a loser,” Ali said ahead of his return against Holmes. And his adoring fans believed him. The fight was no contest, Ali winning not a single minute of a single round. Who can sit and watch this fight today, readily available as it is on YouTube? Ali deserved so much better, yet the Holmes fight was his own doing. It’s just a crying shame nobody was able to stand up to Ali and force him to see sense.

Holmes is the only man to have ever stopped Ali in the ring. But Holmes did not beat Ali; he merely beat a shell of the greatest heavyweight in history. The world saw that, yet it should never have been forced to do so.

5 thoughts on “The Fight That Should Never Have Been Allowed: Holmes – Ali”