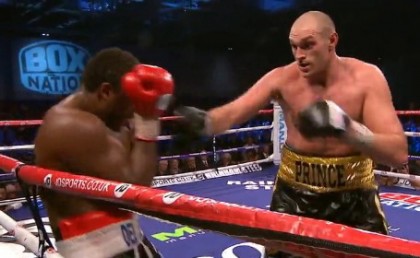 Tyson Fury isn’t short of belief going into his crunch heavyweight world title fight with dominant champion, Wladimir Klitschko, later this month in Germany, comparing both his outlandish character and desire to be at the very top of the sport, to the legendary Muhammad Ali.

Ali, then a brash, young Cassius Clay, pulled a stunning upset over Sonny Liston in 1964 to launch his own legendary star and win the world heavyweight crown, and the oft-vocal Fury claims to see more than a few comparisons with the “Louisville Lip,” especially given his own over-the-top antics at September’s London presser, as well as the underdog status he will carry into the ring against a Klitschko who is 11 1/2 years undefeated.

“Yeah, very much, in different ways but I’d say I’m a modern day Muhammad Ali,” Fury told BBC Sport when asked if he compares himself to ‘The Greatest’. “I’m not trying to be him, I’m being Tyson Fury.

“I don’t want to be any man, only myself. I don’t look up to anybody, only myself…and God. So my plan, however my career unfolds, whatever happens in it, I’ll know I was supposed to do that.

“I don’t think there’s anybody else like me in boxing in any of the divisions, especially now with Floyd Mayweather retiring and everybody getting on a bit, it’s time for a new era and the new guns to get involved in the division, and that’s me.

“I do some crazy stuff, I have done in the past and I’ll continue to do it. If it makes people happy and puts a smile on their face then it don’t do me any harm or cost me anything to be a little bit entertaining for the fans,” he added.

There has been talk of Fury’s up and down antics being attributed to a bi-polar type disorder that has been evident in numerous social media interviews he has conducted in the past, and whether he manages to dethrone Klitschko on the 28th or not, the 6’9″ ‘Gypsy Warrior” was honest, if not a little ambivalent, about his future and how long he will stay in the game after the fight.

“It depends on which mood I feel,” he said. “Depending on if I want to fight on any longer than this next fight or not. I don’t know what the future holds as of yet, but just now I’m looking forward to the fight and concentrating on the fight in hand.

Klitschko/Fury, from the ESPRIT Arena in Dusseldorf, will be live on HBO (US) and Sky Box Office in the UK.