Tyson Fury Gives Anthony Joshua Final Ultimatum: Sign The Contract By Monday Or The Fight Is Off

Tyson Fury has issued Anthony Joshua with an ultimatum: sign the contract for their hoped-for December 3 fight by this coming Monday (September 26) at the latest or the fight is off. Fury, who is in attendance at tonight’s fight card in Manchester headlined by Joseph Parker-Joe Joyce, spoke about how “lucky” Joshua is to be offered the big fight. 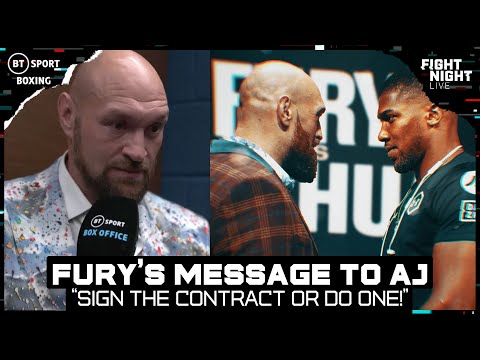 “I was optimistic about three weeks but it shouldn’t be taking this long to sign a contract,” Fury said in speaking with BT Sport. “We’ll know by Monday anyway because if it’s not done by Monday I’m moving on. I’m not waiting around for some guy who’s lost three of his last five fights. He’s lucky I’m giving him a world title shot but I don’t mind chucking him a bone, you know, but I don’t want them to start dictating s**t to me. He is an invited guest at my party, my rules, so if you want to play the game, come to the banquet and take your seat.”

So, the pressure is now on AJ and his team, and we fans, like Fury, will wait and see whether or not he signs on the dotted line on Monday. Eddie Hearn, Joshua’s promoter, has made it clear that neither he nor AJ like or appreciate being dictated to, but Fury is the A-side here; he is the man with the unbeaten record and a world title. Will Joshua sign, or will he not?

In terms of “moving on” if the contract is not signed, Fury may well move on to a December 3 fight with Manuel Charr. “Diamond Boy’s” name has been mentioned frequently, with Charr himself saying he IS fighting Fury in December. This fight, if it comes as a replacement for the mega-fight we were hoping for (perhaps gullibly), would be a big disappointment.

It’s now up to Joshua to give Fury what he wants and sign that contract. That way, a huge disappointment can be avoided.