Superstars Floyd Mayweather and Manny Pacquiao met up in Japan this weekend, and the two all-time greats posed for photos and spoke a little bit about a possible return fight; which could happen in the form of an exhibition bout. Mayweather is of course in Japan for his exhibition with Mikuru Asakura, but why is Pacquiao there? Fans are not buying this as a mere coincidence – not one bit.

There is now a good deal of speculation, with plenty of people convinced the two will fight again in some form or another. Mayweather is happy taking exhibition after exhibition, raking in huge sums whilst taking almost zero risk. Pacquiao is set to join “Money” on the exhibition circuit, when he will box DK Yoo in December and will then box Jaber Zayani next February, this in the Middle East. 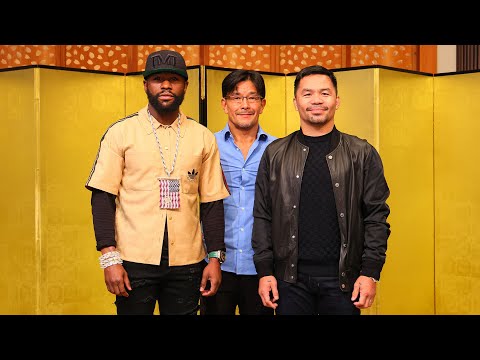 “He’s older than me, I’m still young so…. what I have done and accomplished in boxing is one of a kind,” Pac Man said. “To win [world titles in] eight different weight divisions is not easy. I’m not trying to boast about what I’ve accomplished in life; I’m just saying this in case you forget that. The best fighter in the world has a humility.”

Plenty of fans will no doubt disagree with this statement, but that’s another story, another article. Are Mayweather and Pacquiao cooking up a rematch of sorts? And again, do you even care if they are?