WBC heavyweight champion Tyson Fury gave mandatory challenger Dillian Whyte a hint of what’s in store for him by telling him that he’s “getting annihilated” when they meet in March or April for their WBC-ordered fight.

It’s not a certainty that Fury will win this fight because he’s coming off a poor performance, and he took a real shellacking by Deontay Wilder in his last fight.

Since last October, Fury appears to have ballooned up to near 300 lbs, and it’s unlikely that he’s going to lose all that weight by the time he faces Whyte in April. If Fury doesn’t take that weight off by April, this writer is predicting we’ll have a new heavyweight champion.

To say that Fury was lucky not to have been knocked out in the fourth round by Deontay is an understatement.

If Fury fights like that against Whyte in their expected fight in April, he’ll surely lose. Whyte will take full advantage of Fury’s new fighting style taught to him by his American coach Sugarhill Steward, which involves mauling and walking into shots.

That style is just awful to look at. Yeah, it worked with Wilder, just barely, but it’s not going to work with Whyte, who won’t get tired from the mauling from Fury.

This is a mandatory defense for ‘The Gypsy King’ Fury that he has no choice but to take if he wants to hold onto his WBC strap.

Unfortunately, it’s not the fight that the boxing public is interested in seeing, as they were hoping to see Fury battle three-belt heavyweight champion Oleksandr Usyk for the undisputed championship next.

It’s being said that Anthony Joshua has decided against taking a lucrative step aside to avoid his rematch with Oleksandr Usyk.

If Joshua had stepped aside, it would have allowed WBC champion Fury and IBF/WBA/WBO champion Usyk (19-0, 13 KOs) to meet for the undisputed championship.

For some reason, Joshua never seemed to like the idea of stepping aside, so now he’s going to have to find perhaps the hard way whether he blew it with his decision to take the rematch rather than doing the sensible thing in stepping aside like a good one.

I guess it doesn’t really matter, though. Even if Joshua had stepped aside, he’d have no chance of beating the winner of the Fury vs. Usyk fight because he doesn’t have the stamina or chin to beat either of those fighters.

The only good thing that would have come out of Joshua stepping aside would be to have saved him a spot to fight for the undisputed championship, but I guess he didn’t want it.

“I can’t wait to punch Whyte’s face in,”  said Fury on Thursday to Sky. “I’ll give him the best hiding he’s ever had.  Whyte, train hard! Because you are getting annihilated.

“Joshua and Eddie Hearn are the worst businessmen in history – today they lost $90m,” said Fury.

There had been hope from boxing fans that Fury and Usyk would meet for the undisputed championship in the division, but former IBF, WBA & WBO champion Joshua (24-2, 22 KOs) was never really into the idea of stepping aside.

Joshua never seemed to like the idea of stepping aside, even though the move would likely save him from a likely second against Usyk and temporarily save his sinking career.

The idea of Joshua being seen ducking Usyk didn’t agree with him, so he ultimately rejected it despite the massive money that he’d have made if he’d made that move. 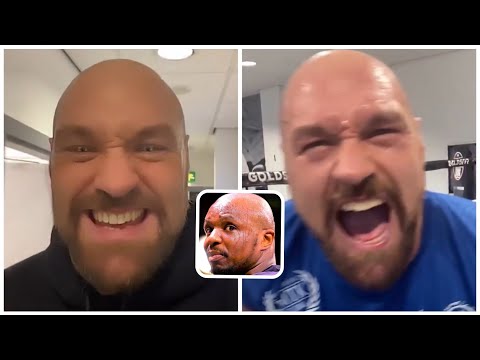