Tyson Fury wants Anthony Joshua to decide already whether he’s going to step aside so that Oleksandr Usyk can face him next. Joshua (24-2, 22 KOs) is believed to be entertaining the idea of accepting a sizable $20 million step aside offer that would allow him to dodge a second defeat against Usyk (19-0, 13 KOs) and then face the Fury-Usyk winner.

Oddly, Joshua seemed up in arms on Monday, denying that he’d been offered £15 million for a step aside. Rather than gladly accepting the money, Joshua was upset about it, which has led some to believe that he’s ashamed that he’s entertaining taking the step aside.

As Usyk’s promoter Alex Krassyuk said on Monday, it would be a good business move for Joshua to take the step aside because he’ll get a lot of money, avoid a possible second defeat against Oleksandr, and will be able to fight the Fury-Usyk winner.

“Joshua is a coward, Usyk is a p****y, and Dillian Whyte don’t want to fight,” said Tyson Fury on Twitter. “If you’re going to prove me wrong, get to f*** fighting, you pair of cowards. You’re all cowards.”

Fury needs to show some patience with this process. The promoters are working hard behind the scenes, trying to put together the step aside deal for Joshua and Dillian Whyte so that Fury can face IBF/WBA/WBO champion Usyk for the undisputed championship.

Instead of Fury railing about the process, he should be patient and look at it as something that will help his career. Look at it this way.

If the promoters don’t put together the step aside deal for Joshua and Whyte, Fury will be stuck taking a dangerous smaller-money fight against the hard-hitting upset-minded Dillin next.

Given how vulnerable Fury looked in his last fight against Deontay Wilder on October 9th, Whyte has a good chance of beating him.

Fury’s weight since he hired American coach Sugarhill Steward as his trainer has led to him becoming a stationary mauler who gets hit and looks sluggish, slow, fat, and old.

“I’m just going to keep videoing until one of these cowards decides to fight,” said Fury.”You’re all cowards. I don’t care who I fight; AJ, Usyk, Dillian Whyte, or any of them. Fight me. I’m the best man that ever lived.

“I’ll annihilate the lot of you and destroy you and submit you, tap you b*** out. Come and fight,” said Fury.

If Fury is the one that messes things up with his bellyaching about the step aside, he could regret it later if he gets knocked out by Whyte. He’ll have wished that he’d kept his yap shut and just went with the flow, waiting for Joshua to take the dough to move out of the way.

If Fury had fought Whyte back in 2015 when he was still trim and capable of moving around the ring, he’d have an excellent chance of beating him.

But with Fury’s new style of fighting, which is patterned after the Kronk Gym style of brawling, he looks sluggish, too heavy, and getting nailed a lot more than he ever did.

Usyk’s promoter Krassyuk wasn’t impressed with what he saw of Fury’s boxing skills in his last fight against Wilder in October. A chubby 277-lb Fury was mauling Wilder, leaning, grappling, and getting clocked repeatedly.

It was a minor miracle that Fury made it out of the fourth round after being dropped twice by Wilder. It looked like Fury was given a long count on the second knockdown in which 11 seconds went by before he got back to his feet.

Fury needs to keep quiet, dump Sugarhill, and lose a lot of weight. Fury is not going to beat Whyte, weighing 277 lbs, and he looks close to 300 lbs. You can argue that the millions Fury has made have taken away his hunger to keep his weight at a manageable level. 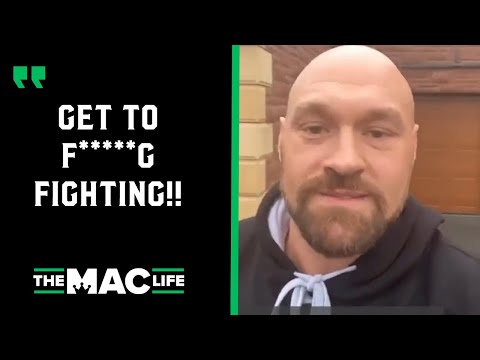