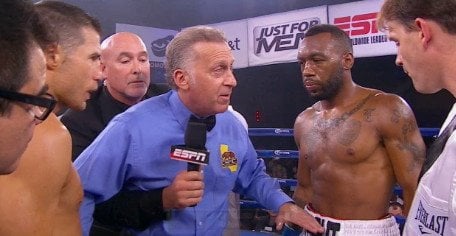 In the 2014 ESPN Friday Night Fights season finale, Austin Trout looked to get his career back on track at the Pechanga Resort and Casino in Temecula, California squaring off against Daniel Dawson. It was a mismatch on paper with 25:1 odds in Vegas. But in the sport of boxing, the only thing one should expect is the unexpected.

Former kickboxer and muay thai fighter Daniel Dawson traveled all the way from his native Australia for the biggest opportunity of his boxing career. New Mexico native Trout, a southpaw, was not only the stronger man, but the younger, fresher fighter as well. The 28 year old was in cruise control against his 36 year old opponent through the first two rounds. However things changed in a big way in the third as Dawson lured his man in and dropped him twice with two hard right hand counters.

Was Trout simply caught asleep at the wheel, or was there a major upset in the works? After a shaky fourth, Trout controlled the middle rounds utilizing his four inch reach advantage to dictate the pace from the outside. At the end of the seventh round Dawson appeared to pull a muscle in his right calf. His mobility was visibly affected as he couldn’t avoid Trout’s punches and was dropped only a minute into the eighth. Bravely, Dawson survived the round, but Trout was in complete control. It was more of the same in the ninth and tenth as Dawson couldn’t seem to move the way he wanted to, let alone get any power punches off.

The man they call “no doubt” Trout pressed for the stoppage, but the fight went to the cards. The decision was a foregone conclusion, but Dawson had made his presence felt and saved face by making it to the final bell. The judges scored it 97-90 three times for Trout, who improves to 27-2 (14KO) while Dawson drops to 40-4-1. Trout showed true grit to get off the canvas and get the win, but has now been floored in his last three bouts. None the less he gets a much needed win and figures to be back in the mix at junior middleweight.

In the co-feature, Ecuador native Erick Bone faced Mexican Mahonri Montes in a welterweight bout; which both men took on about a week’s notice. This was Montes’ first bout outside his native Mexico, while Bone was fighting in the USA for just the second time himself. Bone (pronounced “bo-nay”) worked well behind his jab while moving to his left, seeming to confuse Montes. As the rounds progressed so did the action and Bone’s body language made it clear that he was the boss in there. By the middle rounds Montes was bleeding from the nose, as his opponent was consistently landing the harder punches. The Mexican, who started fighting as a pro at age sixteen, showed a tremendous chin as he ate numerous flush shots throughout. But it was all Bone, who boxed responsibly and consistently; earning a decisive unanimous decision victory. The judges scored it 100-90 and 97-93 twice for the Ecuadorian, who is a prospect to keep your eye on. Erick Bone, who recently signed with manager Al Haymon, improves to 15-1 (8KO) while Mahonri Montes drops to 29-4-1 (21KO).

Tonight’s action wrapped up what was another great season of Friday Night Fights from ESPN. Even though the official FNF series is on hiatus until next February, there are more ESPN boxing cards on the schedule this fall. On October 1st Hassan N’Dam takes on Curtis Stevens in Santa Monica, California and on October 8th former undisputed middleweight champ Jermain Taylor faces newly crowned titlist Sam Soliman (location TBD). The winner of the N’Dam-Stevens bout will become the mandatory for the Soliman-Taylor winner.