Last night in France, unbeaten heavyweight contender Tony Yoka was taken the full ten rounds for the first time in his career, as durable and experienced pro Christian Hammer took him the distance. In terms of points scored and of rounds won, it was pretty much all one way traffic, with the taller and faster Yoka winning via scores of 100-89 across the board. However, Hammer was aggressive and he did have some success in close. Hammer, who has been around, was also able to rough Yoka up some. 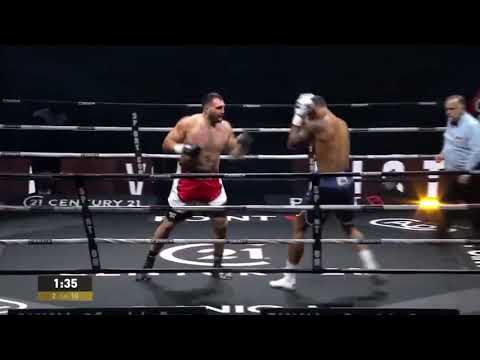 Yoka gave fans a thrilling KO last time out, when he iced countryman Johan Duhaupas in quick time back in September. Yet if Yoka wanted another highlight reel KO against Hammer he was unable to get it. But it’s more likely the 28 year old wanted to get some rounds in, to be extended for the first time. Hammer is a tough guy to take out – as guys like Luis Ortiz and Alexander Povetkin have found out. The 33-year-old has been stopped just three times, the most recent time by Tyson Fury, this via corner retirement back in 2015.

Hammer tried his best to make things hot for Yoka and he did have his moments, only not enough to win any rounds. In the very first round, Hammer was warned by the referee for hitting on the break. Yoka looked to box on the outside, keeping things long. Hammer’s best moments came when he was able to get in close and bang to the body. Hammer suffered a cut above his eye quite early on, this the result of a head clash. Hammer was deducted a point for rough stuff in round six, this seeing him fall even further behind on the cards.

Hammer kept coming all night, and he did make Yoka work. It was perhaps just the kind of learning fight Yoka needed. There was never any doubt over who the winner would be. So what next for Yoka, a fighter who has managed two fights/wins this year despite the pandemic? There has been some talk of Yoka taking on Dereck Chisora next year, and that would be an interesting match-up for sure.

Yoka has time on his side at age 28 and the 6’7” contender could prove to be a very real threat to the world champions over the coming months. Yoka is a fun fighter to watch and he has genuine talent. Hopefully, he will have a big 2021.