Joyce looked like the second coming of George Foreman with the way he bludgeoned the always tough Hammer, sending him to the canvas four times before the bout was halted in the 4th round.

As the WBO mandatory challenger, Joyce is a prime spot to battle the Joshua-Usyk 2 winner. However, it’s unlikely that the winner will elect to fight Joyce, as they’re going to look in the direction of an undisputed clash with WBC champion Tyson Fury next if he elects to come out of retirement.

Joyce will be fighting next on September 24th against a top 20 opponent, and it could be Dillian Whyte if he’s interested in putting himself in a position to challenge for a world title.

Frankly, it’s difficult to picture Whyte accepting a fight against Joyce because it would be a risky one for the recently knocked-out contender.

If Whyte can’t handle the power of Fury or 40-year-old Alexander Povetkin, it’s unlikely he’ll stand up to the heavy shots rained down on him from the 6’6″ Joyce in September.

“Joe Parker, we’ve been down that road, and it’s pretty boring now,” said Frank Warren to Pro Boxing Fans when asked about the possibility of Joe Joyce fighting Parker in September.

“Why wouldn’t somebody that has any ambitions to fight for a world title why would they not fight Joe Joyce? He’s got the #1 spot. If you fight him, you’ve got a chance to get the #1 spot,” Warren said.

“Anybody in that top 20, top 15,” said Warren when asked who else besides Dillian Whyte that Joyce could fight next. “I generally think he’d be too big,” Warren said about how Joyce would do against the winner of the Anthony Joshua vs. Oleksandr Usyk rematch.

“Remember, they have history him and Usyk from their amateur days, but I think he’s [Joyce] a totally different fighter now. I think that would be a great fight, and as far as Anthony Joshua is concerned, I think he’s made.

“He’s [Joyce] not going to have to go looking for him, is he? He’ll be right on him, and he walks you down. He doesn’t take a backward step, so I’ve got to fancy him big time against AJ.

“That’s up to Tyson. Tyson said he’s the toughest guy he sparred with. That’s up to Tyson. If Tyson carries on and fights and unifies the titles, there will be mandatory defenses, and he [Joyce] holds one of the positions with the governing bodies with the WBC that their mandatory’s be called and they’re going to have to defend it or give up or vacate.

“Yeah, why not?” said Warren when asked about making a rematch between Joyce and Daniel Dubois next year in a stadium. “It’s a big bigger fight.

“Listen, it sold out last time. We sold out in a couple of days before the Covid started. We postponed it twice and they went behind closed doors. They’d come on a bit, both of them, haven’t they?

“They’re both ranked #1, and in Daniel’s case, he’s got a title, the WBA heavyweight title. Big fights, massive fights, great heavyweight fights to be made,” said Warren. 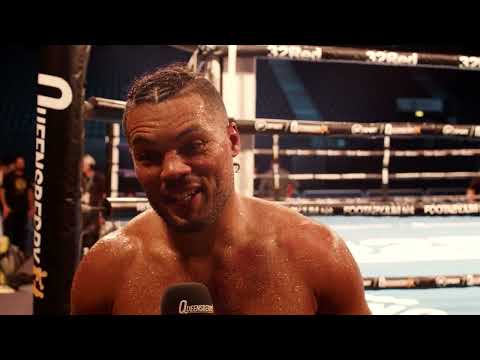