Tim Tszyu (21-0, 15 KOs) will be taking a huge risk facing Tony Harrison for the WBO interim junior middleweight title on Sunday, March 12th, in Australia. The winner will face four-belt 154-lb champion Jermell Charlo, who is temporarily out of commission nursing a left hand injury.

Tszyu, 28, is willing to risk his title shot against the injured Charlo by taking on the well-seasoned ‘Super Bad’ Harrison in a fight that many boxing fans expect him to lose.

Harrison would like nothing better than to defeat Tszyu in front of his own fans in Australia to win the interim WBO belt and then face his nemesis Jermell in a trilogy.

The best shot Harrison has of winning this fight is if he can start out fast and get to Tszyu with one of his massive shots. The longer the fight goes, the better the chance that Tszyu stops a tired-out Harrison late.

The Detroit native Harrison already owns a victory over Charlo in December 2018, beating him by a 12 round unanimous decision. Harrison outboxed Charlo, taking advantage of his bad habit of loading up on every shot, hoping to score a knockout.

In their rematch a year later in 2019, Jermell rallied late to stop Harrison in the 11th. Harrison was giving Charlo another boxing lesson up until getting caught with a big shot and taken out.

“Every fight you take is all on the line; you’re one punch away from going back to the very bottom,” said Tim Tszyu. “It’s all on the line and a gamble, but this is what I do. This is boxing, it’s part of my career, and I’m a fighter first.”

“He [former WBC junior middleweight champion Tony Harrison] was the next best available option. I’m at that stage of my career where I really don’t care who is in front of me. I’m ready to take them all out.” 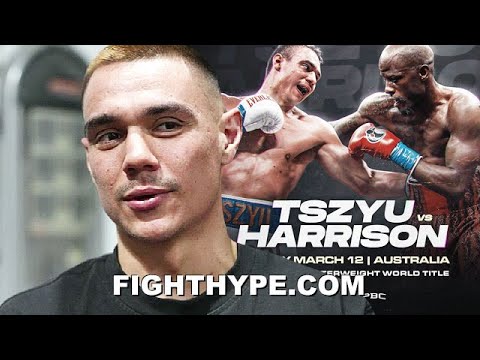 Tszyu will need to fight a lot better than he did in his last fight against Terrell Gausha last March for him to beat a guy like Harrison.

Gausha decked Tszyu in the first round, and gave him massive problems through the first seven rounds before gassing out in the last five rounds to lose a close decision.

Harrison’s history of stamina and a vulnerable chin will give Tszyu a good shot of wearing him down late and scoring a knockout, but it won’t be a walk in the park.