George Groves advises Chris Eubank Jr not to take the rematch with Liam Smith because 160 isn’t the right weight class for him, and he’s no longer the fighter he once was.

Smith (33-3-1, 20 KOs) highlighted how much Eubank Jr (32-3, 23 KOs) has lost from his game by knocking him out in the fourth round last Saturday night at the AO Arena in Manchester, England.

Groves questions whether the 33-year-old Eubank Jr will continue his career after his brutal two-knockdown defeat against Liam. Although Eubank Jr said he would be returning for the rematch with Smith, Groves pointed out that he was suffering from the effects of a concussion when he spoke to the media & his followers.

If Eubank Jr does return to the ring, Groves would like for him to fight at 168, where he’s comfortable at the weight. The only problem with Eubank Jr fighting at super middleweight is that he would have to compete with highly talented fighters like David Benavidez, David Morrell, Caleb Plant, and Canelo Alvarez.

Maybe if Eubank Jr were still fighting in the aggressive style he had earlier in his career before teaming up with trainer Roy Jones Jr, he might stand a chance against the killers at 168, but not with the cautious boxing style that he now employs.

Fighters like Benavidez, Plant, Morrell, and Canelo would take advantage of the watered-down Roy Jones Jr-esque style that Eubank Jr uses and beat the stuffing out of him worse than Liam Smith did.

“I didn’t, and that’s why boxing is difficult to give a full, clear prediction,” said George Groves to iFL TV about the shocking upset by Liam Smith over Chris Eubank Jr last Saturday night.

“Eubank Jr, who is by far the most successful fighter with a famous dad, and maybe that’ll be the last time we see him in action. It’s pride with fighters. You get dropped, and you jump up; that’s what you do. 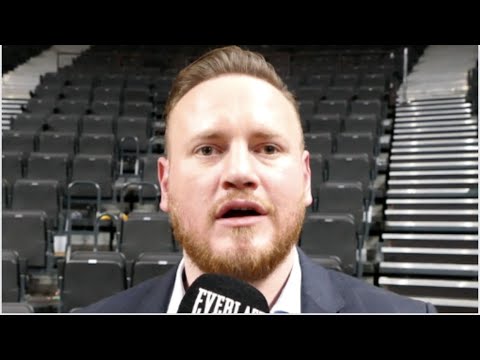 “So he leaped back to his feet but his feet weren’t under him yet. Even if he tried to tie up, Liam is old school; he’s a wily old fighter. He’ll wriggle free and punch away. I always thought at that stage, the fight is over.

“No, he shouldn’t take the rematch,” Groves said about Eubank Jr. “He’s heavily concussed at the moment, and I appreciate the fights still in him, but personally,  I think 160 is too tight. He’s not the same fighter he once was, and Liam is not the right fight for him right now.

“I’m sure he wants to revenge the loss. Yeah, that wouldn’t be the right fight for me. Have a break,” said Groves, recommending that Eubank Jr not take the rematch with Liam.

“Eubank looked too tight at the weight, and he didn’t have his dad around like he usually does, someone who he is accountable to. He looked a little flat like he’d lost a bit of snap & pop on the punches.

“Credit to Liam Smith; he handled everything about tonight brilliantly. Chris was getting into the fight a little bit better; he found his range quite good with the jab and landed a few uppercut swings in the third round, but it was energy-taxing stuff,” Groves continued about Eubank Jr.

“He never looked super comfortable or super smooth with it. It looked like it took a little bit of effort, and pulling out high and relying on reflexes is risky. Smith, I wouldn’t say it was a matter of time, but he found that shot, put that shots together.

“The fight could have been stopped there and then, but this is pay-per-view, we’re paying for it, and it’s the big names,” said Groves about the first knockdown in the fourth round by Liam. “The referee Victor Loughlin made the right decision to try and give Chris another opportunity.