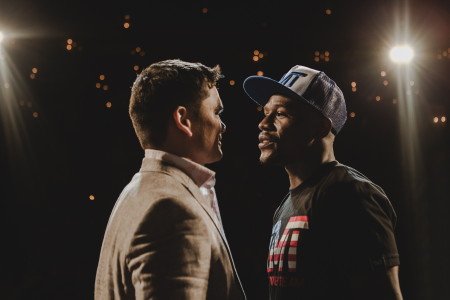 (Photo credit: Amanda Kwok/SHOWTIME®) CHICAGO (July 15, 2014) – The “MAYHEM” that is the Floyd Mayweather and Marcos Maidana cross-country promotional press tour took center stage in Chicago on Tuesday as both fighters resorted to creative tactics to get under their opponent’s skin as they announce their Sept. 13 rematch taking place at MGM Grand in Las Vegas, live on SHOWTIME PPV®.

Eleven-time world champion Mayweather refused to sit down as Maidana and his trainer, Robert Garcia, took their turn at the podium. Instead, he signed autographs for fans, taunted Garcia and chanted his signature line: “Hard work, dedication.”

Not to be outdone, Maidana and Garcia returned the favor when it was Mayweather’s turn on the dais, jetting off stage to greet a large group of “Chino” fans as they chanted “Ole.”

Tuesday afternoon’s event at Auditorium Theatre was the third stop on the five-city, open-to-the-public promotional tour, which continues Tuesday evening in San Antonio and Thursday in Los Angeles.

Here’s what the participants had to say on Tuesday:

“Fighting is not all about power. It’s about being smart. I don’t have to change anything. My job is to go out there and do what I am paid to do – that’s be smart and finish first. And I always finish first.

“I’m going to do the same thing I always do. It’s about blood sweat and tears, and nobody does it better than me.

“I’ve had some bumps and bruises, but I always stay on top. His camp needs to make major changes if they want to have a chance.

“My hand got raised so I don’t need to make any adjustments. He needs to make some major changes and probably get a new trainer if he wants to have a chance against me.

“I have to watch this guy in there. He’s dirty.

“If he really feels like he won the first fight then he should bet his purse. He should put his money where his mouth is. But he knows he can’t beat me.

“My legacy and the will to win drives me to keep fighting. All I have to do is keep racking up victories and putting on a show.

“If you want to beat me you have to earn it the hard way.

“Why are we fighting again? Because the fans wanted it. I usually dominate my opponents or knock them out. But this guy won three or four rounds against me, and that never happens.

“It’s obvious he’s doing something right if he is facing me again and he won a few rounds from me. But the referee had a bad night last time. We forgive him but this is going to be a much cleaner fight. Note of those dirty rabbit punches or elbows.

“This is not a street fight; this is not an MMA fight. My health and my career after boxing is what’s important. He has a wife, he has children. I could hit this guy without gloves and he could never talk again. We use gloves to protect ourselves.

“It’s going to be another great showdown because I’m pretty sure he’s going to be ready and I’m always ready. We’re just going to give the fans what they want to see

“My back is always against the ropes no matter how it plays out in the sport of boxing. If I dominate a guy they say he’s over the hill. If I don’t knock a guy out they say he’s slow. I’m not just fighting my opponent, I’m fighting the world – the media, the critics, the haters. But it comes with the territory.

“I’m in this position for a reason so all I can do is go out there and be the best Floyd Mayweather. I just need to dominate, take my time and listen to the instructions that my father gives me.

“Robert Garcia is not the fighter, so he can say whatever he wants to say. It’s up to the fighter to get in there September 13 and show me what he can do.

“This is my era and I just might be on another level.”

“I’m going to have to go for the knockout this time, I have no choice. Floyd’s defense is very good and at times it is hard to hit him. That’s why I want to knock him out.

“First, I’m going to give him a beating and then I’m going to knock him out. It’s going to be hard to get a decision because he connects well and knows how to score points.

“I’m going to make some technical adjustments, work on my distance and always pressure him. Our camp last time was great, but we just need to make minor adjustments to get the win.

“Floyd is trying to get under our skin, but it’s not going to work. We’re going to do our fighting in the ring and this time we’re going to win.

“Floyd can say whatever he wants about me. He knows that I gave him the toughest fight of his life. The only difference is this time I will knock him out.

“This will be a different fight. He knows what I bring to the table and he knows how I fight. I don’t want to leave any doubt whatsoever. To beat a champion like Floyd you have to knock him out.

“I promise I’m going to put on a great fight and I’m going to shut his mouth. He doesn’t respect anything or anyone. He might have money, but he doesn’t have respect.

“One hundred percent the gloves made a difference in the last fight. The gloves I use are fit to my hand and are more comfortable. But the ones that I was forced to wear were not comfortable.

“But the bottom line is, this time I’m going to win with any glove that I wear.

“We only had five weeks of sparring and training camp last time. But in this camp we’ve already been in the gym for a week and we still have eight weeks to go. So we will be 100 percent ready for Sept. 13.

“The rematch was unexpected because I thought Floyd was not going to agree (to fight me). And then, one day out of the blue, I got word Floyd wanted to fight me again. By then I was already thinking I wasn’t going to fight again this year.

“For me, what’s really important here is to come out victorious. I come here to win and I don’t really care about money.

“I think many fighters are obsessed with Mayweather. Everybody wants to fight him because they get the chance to make history if they win. And I want to make history.”

“If Floyd thinks the last fight was tough, this fight is going to be even tougher.

“I retired 12 years ago, and I heard you talking about me and my fights. I know that you are going to bring up my fight with [Diego] Corrales –I have nothing to be ashamed of. I lost to a warrior. He was a great champion and I lost that fight with honor, not like a [expletive].

“You’ve been bringing up stories about dirty fighting, dirty this, dirty that. Guess what? This fight is going to be rougher for you. You better be ready.

“You are going around telling Chino that you want to place a bet on this fight? Well, let’s do that bet right now. You want to put in conditions? Well, we have our conditions, too. Let’s do a bet where winner takes all. You have a lot of money. Winner takes all.