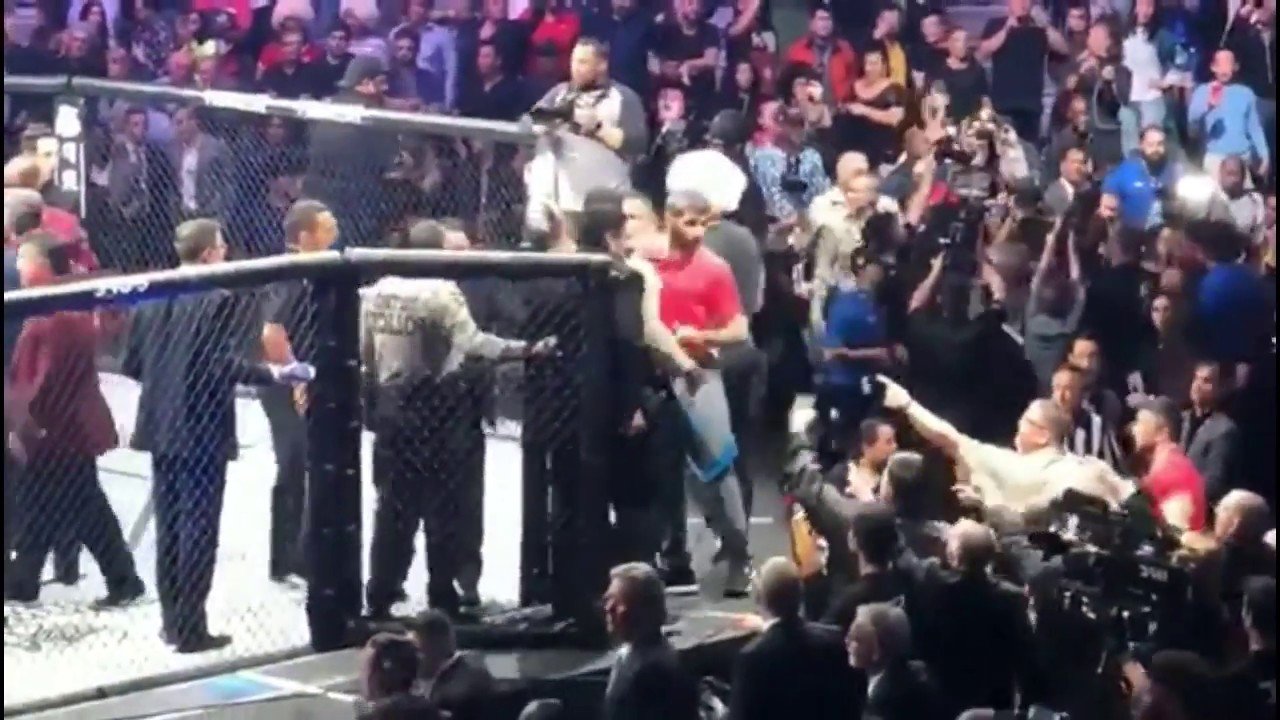 There sure were some incredible scenes inside a packed-out T-Mobile Arena in Las Vegas this past Saturday night – as surely all fight fans, boxing and MMA, know all about. After Khabib Nurmagomedov defeated Conor McGregor, all hell broke loose. The winner saw fit to leap over the top of the cage he had just beaten up McGregor in, and pounced upon one of the Irishman’s team. Then, more bodies piled into the cage and set about the still-recovering McGregor!

It was, to put it simply, sheer carnage. The scenes were so shocking none other than Mike Tyson, sat at ringside, was, well, shocked. Taking to social media when the smoke had cleared, the one-time “Baddest Man on The Planet” said the events were “crazier” than those seen at “my riot fight.”

Tyson was of course referring to his own fall from grace in Vegas, the unforgettable night in June of 1997 when the former heavyweight king lost his marbles completely and sank his teeth into both ears of Evander Holyfield. Seconds after the subsequent DQ, the ring was filled with bodies; with, fists, arms and feet flailing everywhere. Who knows if these scenes of anarchy were indeed topped by the disgraceful scenes on Saturday. But it just goes to show that boxing, a sport that has suffered more than its share of black eyes, is not the only sport to have a riot.

But there have been some bad nights at the fights: nights to forget if possible. What about when that full-scale riot broke out inside Madison Square Garden the night Polish nutcase Andrew Golota was unable to stop himself from repeatedly hitting Riddick Bowe in the nuts? This one was surreal, with armies of fans of the two fighters getting into it; chairs and other things being thrown everywhere.

And there was of course that night in Germany, when rival British heavyweights David Haye and Dereck Chisora got stuck into one another after Chisora’s losing fight with Vitali Klitschko. Here, a bottle was used to inflict damage, as well as a tripod for a camera. It was nasty yet it helped set up a huge-money fight for that summer.

Who knows what Nurmagomedov’s fate will be. But in boxing, when something like this happens, a return fight often takes place. We civilised people may be outraged and disgusted by events such as the ones that took place on October 6, but we are all always still there to see the next big fight, are we not?

Shocking, disgraceful and unacceptable behaviour such as this is, as it turns out, good for business.