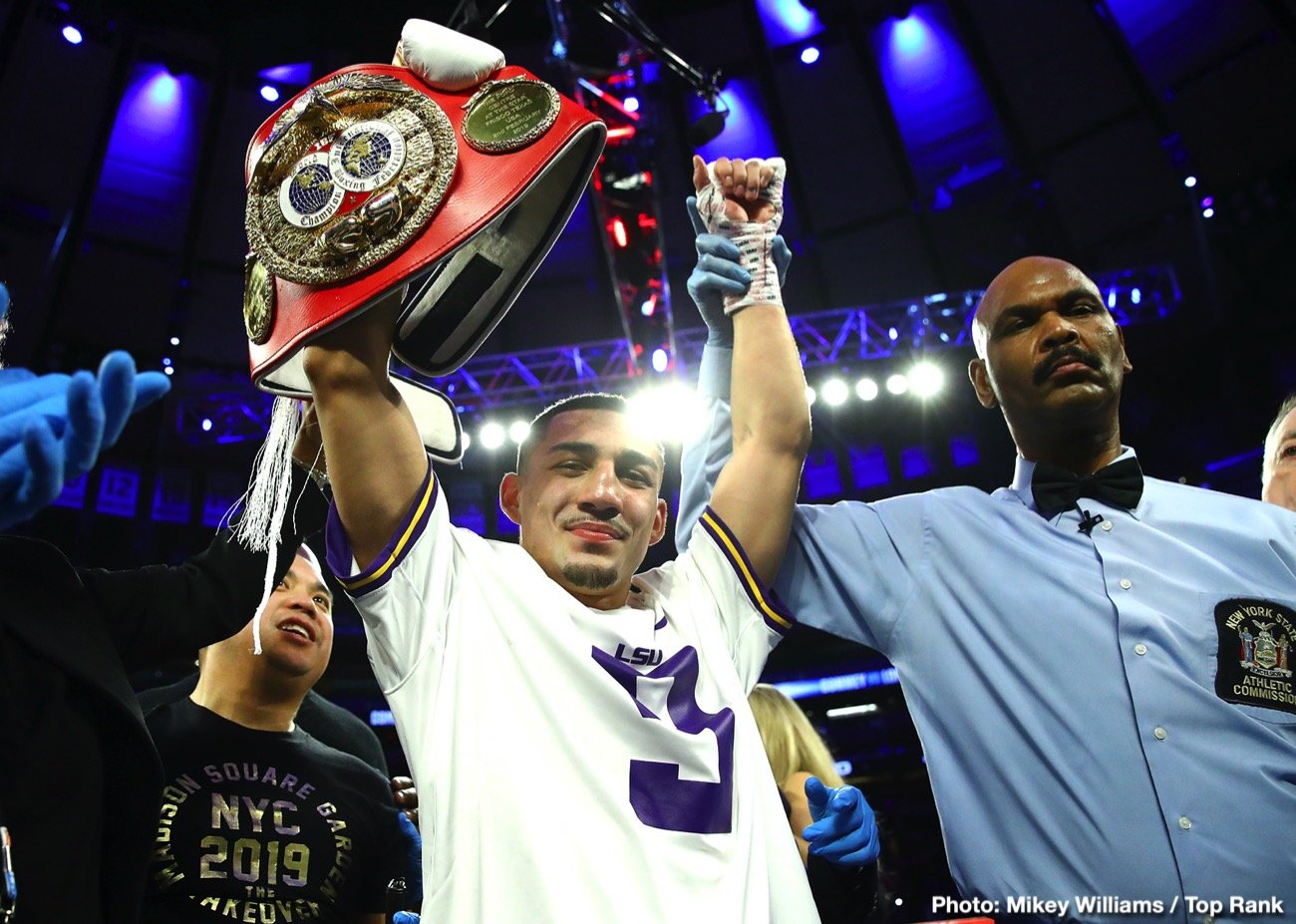 IBF lightweight champion Teofimo Lopez jumped ahead of his promoters at Top Rank by hinting that his unification fight against WBA/WBC [F]/WBO champion Vasily Lomachenko will be on May 30 in New York. Teofimo added the fight could be on pay-per-view.

It’s an excellent fight, matching two of the best 135-pounders in the world against each other. The 31-year-old Lomachenko (14-1, 10 KOs) is 9 years older than the 22-year-old Lopez, and by far the more experienced. But at the same time, Teofimo has the kind of power and the youth to transcend any of the advantages that Lomachenko has with his experience and boxing skills.

It’s a little early in the game for Teofimo to be fighting on ESPN pay-per-view. Ideally, the Lomachenko vs. Lopez fight should be on ESPN or ESPN+, so that Teofimo can be seen by a lot of casual boxing fans that have never seen or heard of him before.

By placing the Lomachenko-Lopez fight on PPV at this early stage in Teofimo’s career, it means that far fewer fans will see him. That would be unfortunate because this is by far the biggest fight of the young Brooklyn native Teofimo’s career, and he needs to take advantage of this by being seen by new fans.

On the other hand, Teofimo and Lomachenko will obviously want to make as much money as possible, and the best way to facilitate that is to place their fight for the undisputed lightweight championship on pay-per-view. But it’s a double-edged sword putting Teofimo vs. Lomachenko on PPV rather than just having it seen on regular ESPN.

It obviously will have both favorable and unfavorable consequences. In going or the short term money in placing the Lomachenko-Lopez fight on PPV, it could hurt Teofimo’s career in the long run, because he won’t be seen by millions potentially in his moment of triumph in defeating the #1 fighter in boxing.

Lomachenko is viewed as the best fighter in the sport, and it’ll make Teofimo an overnight star if he can be seen by the masses on regular ESPN rather than on PPV. A lot of casual fans will be reluctant to pay $70 to see two guys that they’ve never heard of before in Lomachenko and Teofimo.

Even a lot of the hardcore boxing fans will be relucant to pay to see Lomachenko-Lopez. Many of them have seen Lomachenko’s past fights, which has ended up being clinics for the Ukrainian in him displaying his skills. What also hurts the Lomachenko-Teofimo fight as far as it being on PPV is Lomachenko isn’t a slugger, and he tends to use a lot of movement to avoid shots.

If you saw Lomachenko’s recent fight against Luke Campbell, it was boring at times, because Loma was moving so much, and he wasn’t stopping long enough for there to be any real action. Lomachenko would dart forward, land a shot, and then scamper away.

This was not a Mike Tyson-esque performance by Lomachenko. That’s why asking fans to pay to see a fight between Loma and Teofimo might be a mistake. Yeah the fight will make money for both guys in the short term, but it could hurt the rise in popularity of Teofimo if the casual fans don’t get a chance to see him beat Lomachenko.