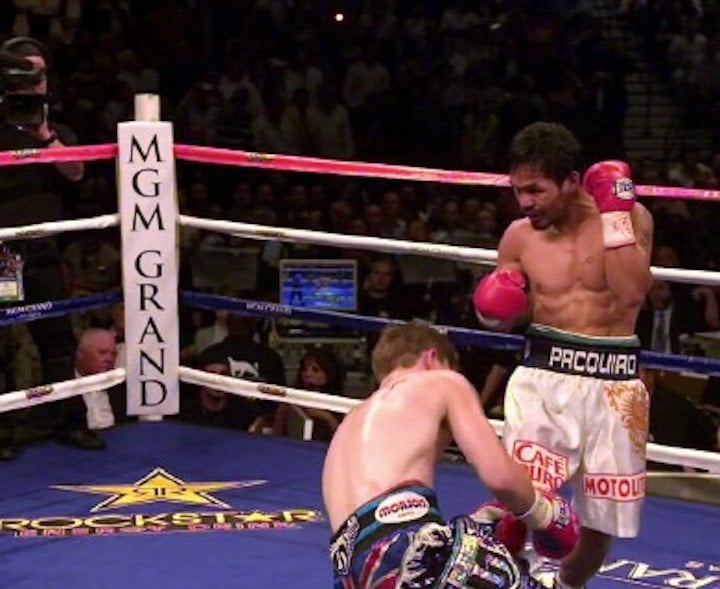 It was the worst night of British superstar Ricky Hatton’s career, and it was one of the best, most electrifying nights of global superstar Manny Pacquiao’s career. The two met a decade ago today in Las Vegas, and the fight, as big as it was, proved that no major world title needs to be on the line for a fight to have serious magnitude to it (the fledgling IBO belt was at stake only).

And in the short fight, Pacquiao showed how utterly destructive he could be on any given night. It was no contest right from the start, as Hatton suffered without a single doubt the most devastating KO loss of his fighting life. Hatton has said many times how he had a terrible training camp – coached by now as he was by Floyd Mayweather Snr – and it is possible the fight would have turned out differently had Hatton, who had rebounded from his 10th-round stoppage loss to Floyd Mayweather Jr, been at his best.

Still, the Hatton Pacquiao fought on this night proved to be almost a sitting duck. Marching in, his hands held far too low, the former 140 pound king of the world was an inviting target for Pacquiao, who had just arrived as a genuine megastar with his sad to watch demolition of a weight-drained Oscar De La Hoya. The fight was almost over in the opening round, as the southpaw dynamo from the Philippines decked the Manchester man twice.

Hatton, showing heart, tried to fight back in round-two, and he did succeed in landing the odd blow. But Pac Man would not be denied. And then it happened. A left hand from hell collided with shotgun force on Hatton’s exposed chin and down he went. Hard. Incredibly hard. Shameless camera-men zeroed in on Hatton’s clearly distressed fiancée, while Pacquiao refrained from full-on celebrations; so concerned was he about the well-being of his unconscious foe.

Thankfully, Hatton was okay – even fighting again three-and-a-half years later – but the talk of the town was of Pacquiao’s utterly terrifying punching power. Would any 140 pounder be able to live with it?

As it turned out, we never got an answer, as Pacquiao continued his rise through the weight divisions and next fought as a welterweight. In time, Manny would meet his match in the form of arch-rival Juan Manuel Marquez, who scored a KO over Pacquiao that was as shocking as Pacquiao’s KO of Hatton was brutal. But for now, Pac Man was the number-one fighter on the planet.

Indeed, the only other man who could rival this claim, in common opponent Mayweather, would not go anywhere near Pacquiao for years. What would have happened had Pacquiao and Mayweather fought in 2009, or 2010, or 2011, or 2012…..? Avid fans of both greats have a firm idea.