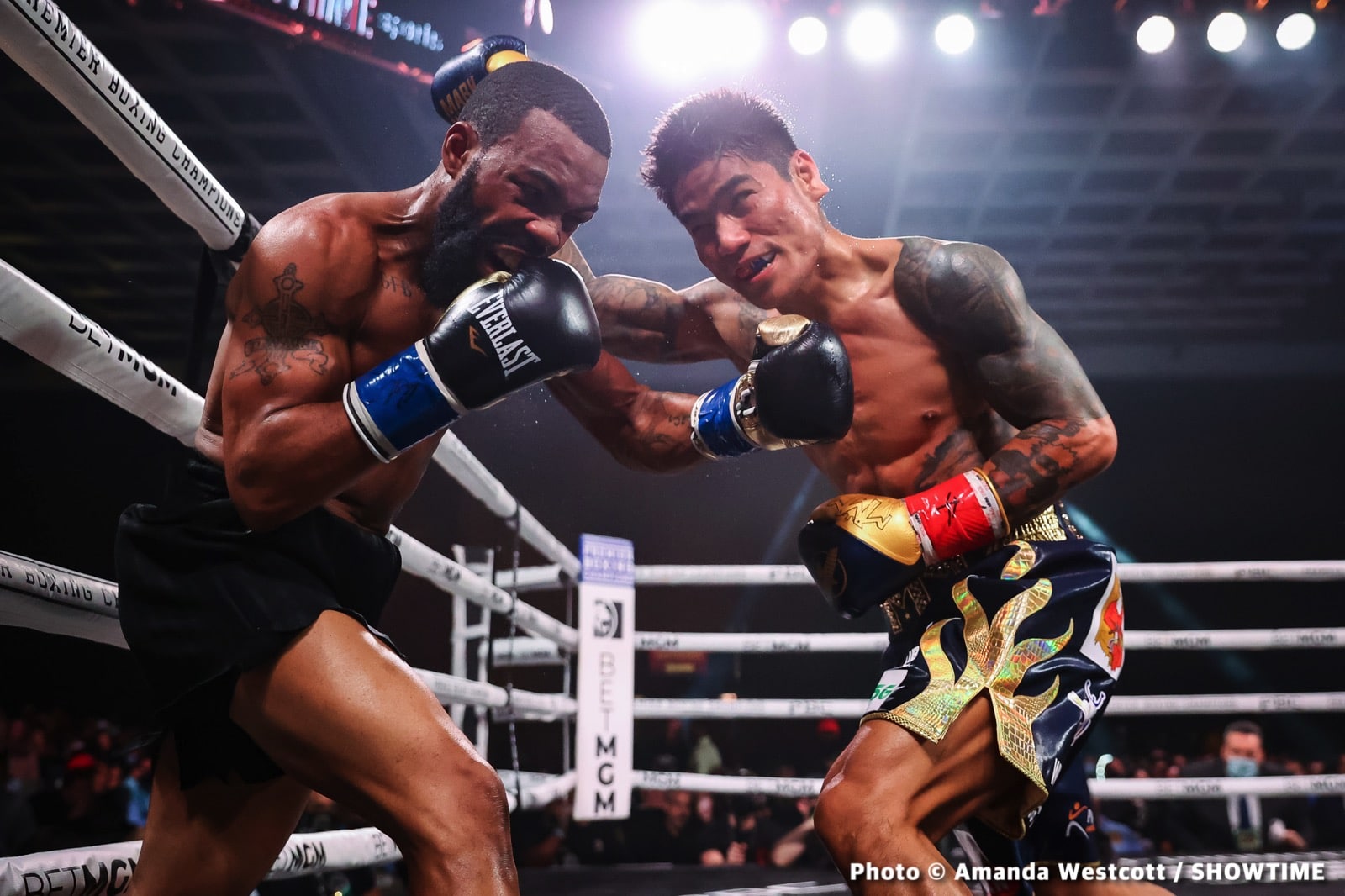 Gibbons states that the 33-year-old Russell Jr’s claims of having a preexisting shoulder injury was nothing more than a “predetermined excuse” for him to say to squirm out of owning his 12 round majority decision loss he suffered at the hands of the unbeaten Magsayo (24-0, 16 KOs).

According to Gibbons, there was nothing wrong with the shoulder of Russell Jr. (31-2, 18 KOs) going into the fight, but after getting hit hard, he suffered the injury.

Magsayo, 26, agrees with Gibbons, saying that Russell Jr. was using his right shoulder without any problems through the first three rounds, but after he tagged him with a shot on the arm in the fourth, that’s when the injury occurred.

If the injury happened in the fourth, it’s unclear why Russell Jr. was claiming that he hurt it during training camp for the fight. Is it because Russell wanted an excuse so he wouldn’t have to acknowledge that he lost to the better man?

Interestingly, Russell Jr. said after the fight that he felt he won by a “10 rounds 2, 9 rounds to 3” score and that he’d given Magsayo a “boxing lesson” using just one arm from the fourth round.

“It depends on my promoter, Sean,” said Magsayo when asked if he’ll give Russell Jr. a rematch.

“We’ll look at everything, man,” said Sean Gibbons to the media last Saturday night on the possibility of Magsayo giving Russell Jr. a rematch. “We were the mandatory for this. We earned it, we got here and we beat Gary. 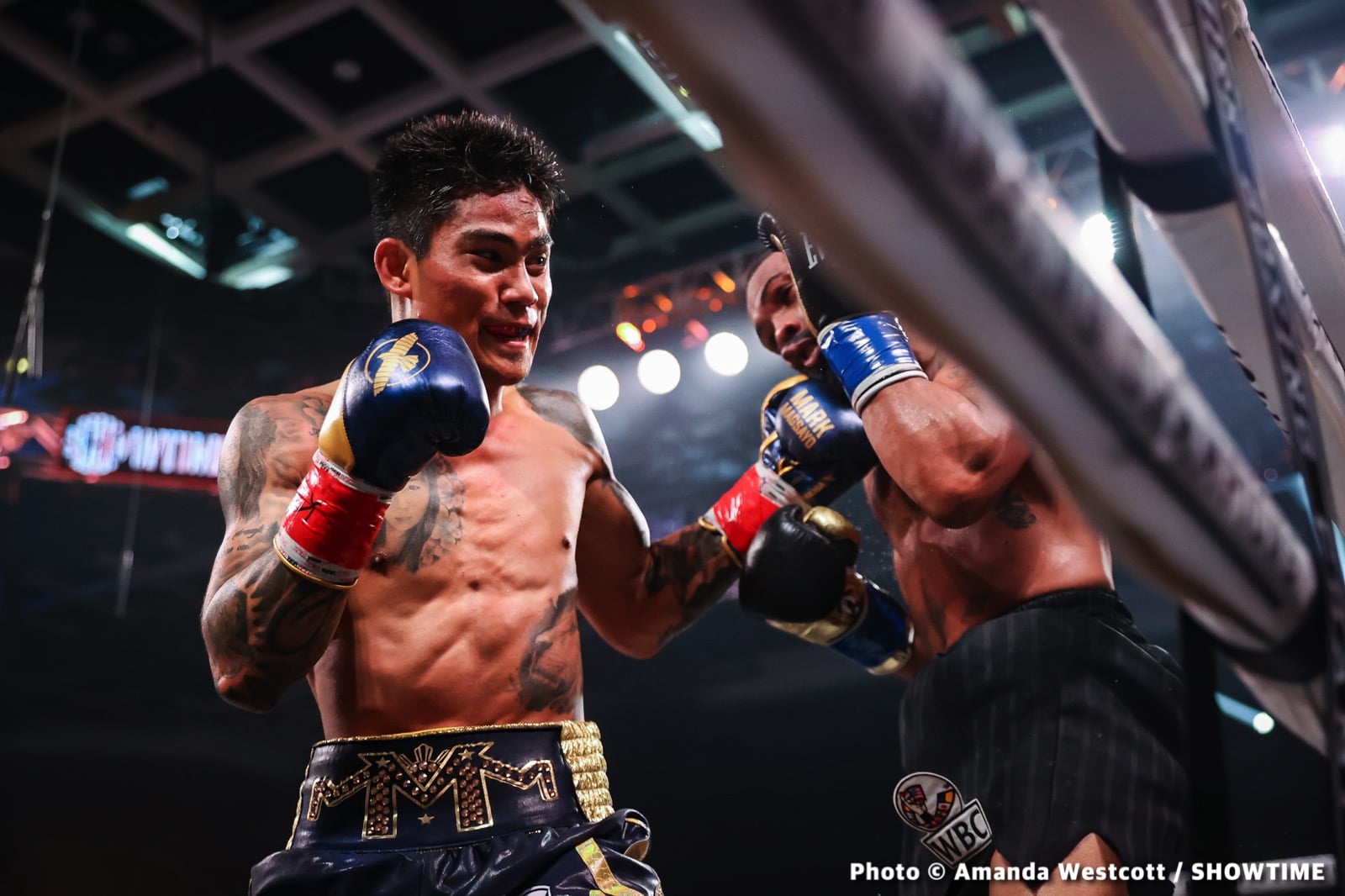 “The problem with giving him [Russell Jr] a rematch is I don’t know what year it would take place. He only fights once every one or two years. S***, maybe in two years from now, we’ll give it to him,” said Gibbons on Magsayo eventually fighting Russell Jr. again when the defeated former WBC 126-lb champion returns for his annual fight.

At this point, Gibbons says they don’t want to wait around one to two years before Russell Jr. is ready to fight again to give him a rematch.

Magsayo and Gibbons say they won’t wait for Russell to return for his once-a-year fight, and they’re going to move on and defend against WBC mandatory Rey Vargas next.

“I’m just following my training camp, boxing plan. So, I don’t care what it is. It’s just talking,” said Magsayo when asked if he was aware that Russell Jr. was injured going into the fight.

“I want to clarify Gary’s injury,”  said Gibbons in cutting in. “His injury was [caused by] Mark Magsayo. He [Russell Jr] made predetermined excuses because he’d been out of the ring,  he hadn’t fought. He had no problem with that [right] shoulder.

“He was doubling up on that shot that he was throwing at Mark. So, I love Gary, he’s a lovely fellow, but no excuses, man. Mark beat him fair and square,”  said Sean Gibbons in blowing a hole through Russell’s shoulder injury excuse that he was using to try and explain away his loss to Magsayo.

“One, two, three rounds, he just punching left and right, but I got him hurt in the right arm in the fourth round, so that’s why he got hurt,” said Magsayo in making it clear that Russell Jr was injured DURING the fight, not before, as he claims.

“He hurt it during the fight. He wasn’t hurt coming into it,” said Gibbons of Russell Jr. “When Mark punched him, that when it hurt.”

It would have been helpful if Russell Jr. had revealed what his injury was before the fight because he’d already alerted the media that he was coming into the fight with a preexisting problem.

No one knows if the injury that Russell Jr. was referring to was a shoulder problem or something else.

During the fight, it looked like Russell Jr. was having problems with one of his legs, and that could have been the injury that he was telling the media about.

In hindsight, Russell Jr. only has himself to blame for going into the fight with Magsayo with an injury problem. It’s Russell’s fault that he chose to fight with an injury, and now he’s paying the price with him losing his title.

From what Gibbons is saying, they’re going to likely move on and face their WBC mandatory Rey Vargas next rather than face Russell Jr. again.

Where does Russell Jr go now? He’s too small to fight at 130 or 135, so he should stay at 126 and go after one of these featherweight champions:

Rey Vargas next for Magsayo

“Yeah, but his speed is good footwork,” said Magsayo when asked if he thought of trying to knockout Russell Jr. when he noticed he was injured. “He overcame my power. I’m so happy. I’m a champ now.

“This is my dream, the green belt [WBC featherweight title]. Every fighter, it’s a dream. He was always telling me, ‘Mark, focus, throw the combinations, and follow the game plan,'” said Magsayo on what his coach Freddie Roach was telling him during the fight.

“It depends on my promoter. You can’t fight anybody now,” said Magsayo on whether he’ll give Russell a rematch.

“We got to fight [#1 WBC 126-lb contender]  Rey Vargas. We got a mandatory,” said Gibbons on Magsayo needing to defend against his mandatory challenger to his new title.

“We may fight another fight and then do that fight,”  said Gibbons.