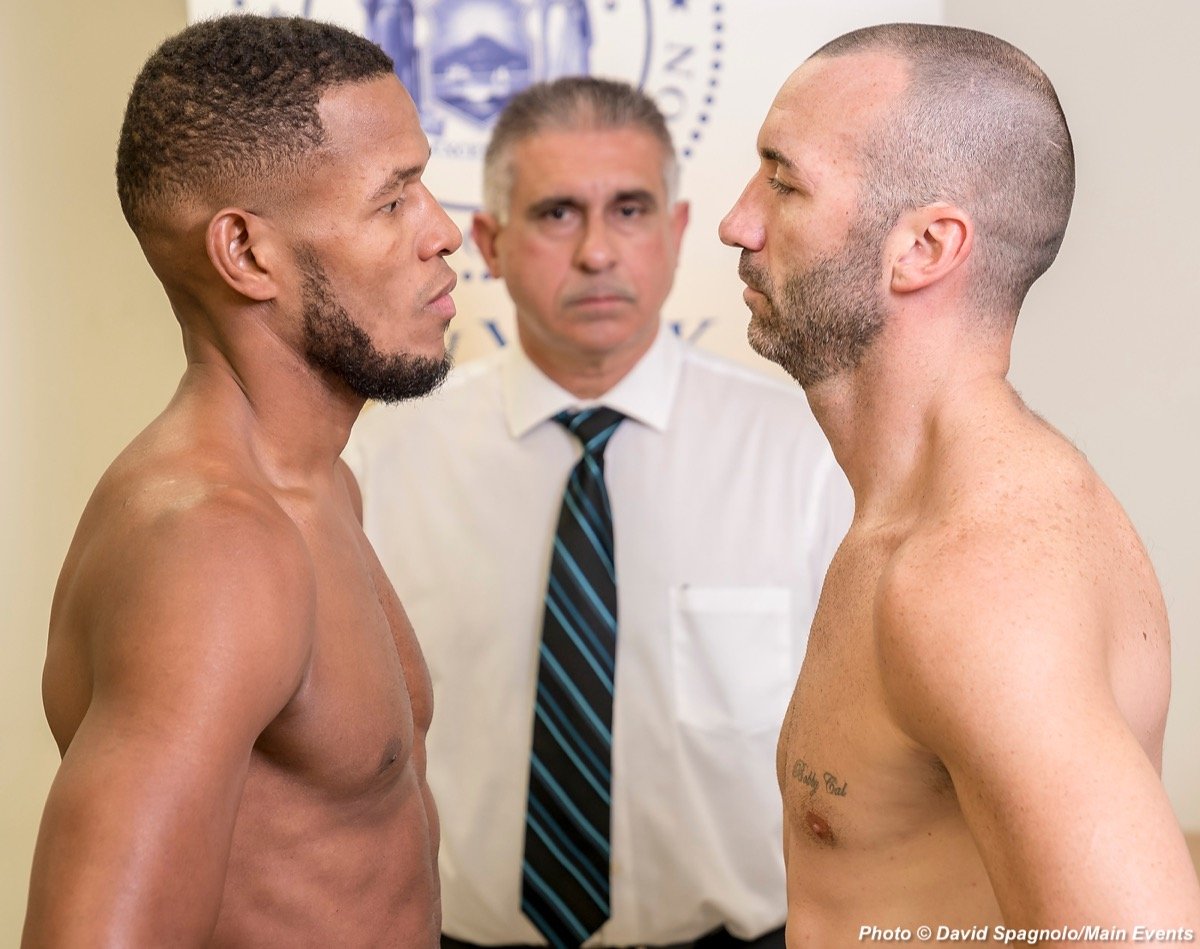 Today at Mendez Boxing in Manhattan, Sullivan Barrera (21-2, 14 KOs) and “Irish” Seanie Monaghan (29-1, 17 KOs) addressed the media and faced off in advance of their Saturday, November 3 showdown on Golden Boy Fight Night on Facebook Watch live from the Aviator in Brooklyn. Below are quotes and photos from the event:

On the fight this weekend:

“I feel good, I feel great. Ready to retire him.
I’m going to bring it, and someday become the number one light heavyweight in the world.”

On the fight this weekend:

“It’s going to be a tough one, man, but I’m ready for it. Mentally and physically, I’m ready for it. Barrera is what I call a deep-water shark. He’s been in deep before, he’s dangerous the whole time. He’s the kind of guy, he’ll get dropped, get back up, and fight even harder. I’m expecting to get my work cut out for me, but I’m ready to do what I gotta do to win.”

“One hundred percent for both of us, I say. That’s why we’re both gotta be in desperation mode. We both desperately need to win this fight. It’s going to show on Saturday night. Lucky for you guys, but not so lucky for us!”

The long-awaited showdown between former light heavyweight contender Sullivan Barrera and Top Ten hometown favorite “Irish” Seanie Monaghan this Saturday, November 3 at the Aviator in Brooklyn is shaping up to be a slugfest. Below is the scouting report for this exciting match-up:

The former title challenger has a tremendous jab and a granite chin behind it. He has solid endurance and will come into this fight with championship experience over his opponent.

Monaghan is a fearless fighter with a big heart and even bigger right hand. He is aggressive and does a superb job of breaking down his opponents from start to finish.

Sullivan has great technical boxing skills but also has a tendency to get into wild slugfests with his opposition. If he loses his composure in this one, then he may be falling right into his opponent’s trap.
Seanie has been somewhat inactive, this will be his first bout in 12 months. He also lacks the top-level opposition that his opponent has faced thus far.

Barrera has faced a number of title contenders in recent years, including a world title fight in his previous bout against Dmitry Bivol where he suffered his first career stoppage loss in the 12th and final round.

The Irishman has more professional bouts under his belt. However, Sullivan Barrera will be the toughest opponent he has faced in his career.

Sullivan has a powerful jab and a devastating right hand that has been very influential in the majority of his stoppage wins.

Monaghan throws punches in bunches and has a devastating right hand that has ended the night for a number of his opponents.

The Cuban has average speed and maintains a steady pace throughout the fight.

Seanie has solid speed. He has quick hands and is effective at beating his opponent to the punch.

Barrera’s endurance is just as good as anyone in the light heavyweight division. He has gone the distance with the likes of Joe Smith Jr, Andre Ward, Felix Valera, and many others

Monaghan’s endurance is one of his many strong points. He has gone a full 10 rounds on five separate occasions and keeps a healthy pace along the way.

Sullivan’s accuracy is on point when he gets his jab going and puts his punches together behind it.
Seanie’s style has allowed him to be an accurate puncher, he likes to close in on his opponents, leaving them with little room to run.

If Barrera commits to the jab, then it can be very effective in taking any fighter out of their element, making it that much more difficult to get anything going offensively.

His best defense is his offensive aggressiveness, he smothers his opponents with a high volume of punches.

Sullivan has a granite chin. He has been knocked down in prior bouts but has risen to the occasion. He has just one stoppage loss on his resume.

Seanie has a strong chin. He takes shots in order to dish them out but has only been stopped once in 30 professional bouts.

Sullivan is an extremely tough and technical fighter that likes to stick his jab and set up his shots. He also has a brawling style that inevitably comes out when his opponents show that they are willing to engage.

The Irish slugger is an offensive-minded, aggressive, in-your-face fighter who likes to put on an action-packed fight and not leave it in the hands of the judges.

After coming up short in his first shot at a world title against current WBA Champion Dmitry Bivol, Barrera is wasting no time in getting back into the mix. His opponent has been a Top 10 ranked fighter for a long time, and for good reason. Sullivan fully understands that this fight is high risk, but it is even higher reward if he can pull out the win.

With each of the current titleholders in the light heavyweight division scheduled with fights, Monaghan is avoiding a tune-up bout to stay busy, but instead challenging one of the toughest 175 lb fighters in the world. He knows that a win here will leave no doubt in his abilities to compete with the best in the division and move him that much closer to a title shot.

Although Barrera has competed in big fights in New York against top guys, he will be in Monaghan’s backyard.

Monaghan is a hometown hero and he is known to have a rabid fanbase.

Will Monaghan be able to handle the power of Barrera?

Is Sullivan the same fighter after the Bivol fight?

Will Monaghan be able to handle Barrera’s boxing and come-forward style?

Will Sullivan capitalize on this moment and show why he still belongs with the best?

According to Main Events’ matchmaker, Jolene Mizzone, “I love match ups like this. They are both in the Top 10 and, like most other fighters in their position, could have just sat back and waited for a title opportunity to come to them. These two would rather fight each other, challenge themselves and create their own opportunities rather than sit around and hope for a big fight.”

About Barrera-Monaghan: The Saturday, November 3 card, headlined by Sullivan Barrera versus “Irish” Seanie Monaghan as part of the Golden Boy Fight Night series on Facebook, will take place at The Aviator Sports & Events Center in Brooklyn, NY. The event is promoted by Main Events. The action will be streamed live globally on Facebook Watch via the Golden Boy Fight Night Page beginning at 6:00 p.m. PT/9:00 p.m. ET.