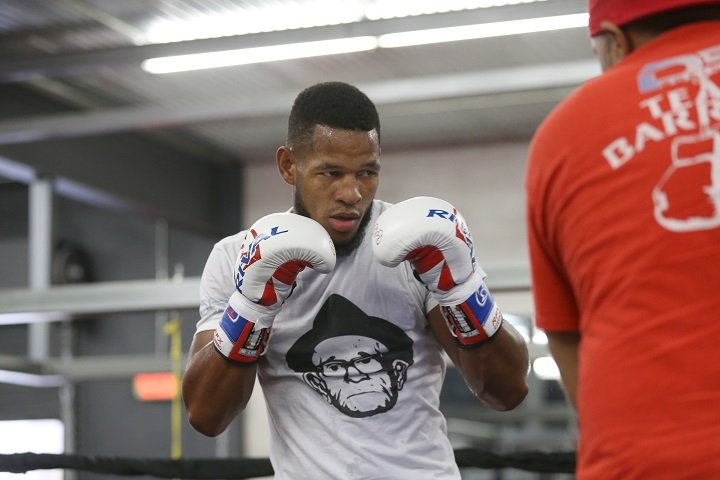 This Saturday’s Kovalev-Shabranskyy HBO World Championship Boxing® telecast will include a battle between two of the light heavyweight division’s biggest punchers when Sullivan Barrera and Felix Valera square off at the Theater at Madison Square Garden. Below is the scouting report for this exciting match-up:

Barrera has solid endurance and a granite chin. He has a strong jab that he uses well and has shown great patience in breaking his opponents down.

Valera is a crafty southpaw who has one-punch knockout power in both hands. He moves around well and does his best to utilize the whole ring to his advantage.
Weakness

Sullivan is known to get somewhat wild, he needs to keep it together and stay sharp in order to avoid one of his opponent’s thundering blows.

Felix gets careless at times. He likes to drop his guard and taunt his opposition. Barrera is a sharp fighter who can capitalize on this if Felix is not careful.
Experience

He is an experienced fighter who has been in with some of the best fighters in the division: Andre Ward, Vyacheslav Shabranskyy, Karo Murat and Joe Smith Jr. Barrera He came back from a first-round knockdown in his last fight against Smith Jr. to secure a unanimous decision victory. His ability to overcome adversity has made him a stronger fighter.

Although, he has not faced the same level of opposition as Barrera, Valera is still a former world champion. He managed to accomplish a lot in his career despite only being 16 pro fights deep. He earned the WBA Interim Light Heavyweight World Championship against Stanislav Kashtanov in Russia before losing it to current titleholder Dmitry Bivol.
Power

Sullivan has a powerful jab and a devastating right hand that has been very influential in a majority of his stoppage wins.

Valera delivers thunderous blows to his opponents. He relies heavily on his power, which has been a very successful strategy thus far.
Speed

Sullivan has average speed and maintains a steady pace throughout the fight. He understands when to turn it up a notch if he feels he can finish his opponent.

Valera uses many different gears in hopes of throwing his opponents of off their game.
Endurance

Barrera proved he could go 12 rounds when he came up short in a decision loss to former titleholder Andre Ward. He also earned a 10-round decision win over ranked contender Joe Smith Jr. in his most recent bout.

After starting his career with 11 knockout wins, all occurring in the first and second rounds, Valera proved that he is durable when he captured the WBA title in a 12-round decision win over Stanislav Kashtanov.
Accuracy

Sullivan’s is on point when he gets his jab going and puts his punches together behind the jab.

Felix does not utilize his jab as well as his opponent.
Defense

If he commits to the jab, then Barrera can be very effective in taking his opponents out of their element, making it that much more difficult to get anything going offensively.

Although he relies heavily on his power, Valera is a very effective defensively. He is very agile in the ring and is a sharp counter puncher.
Chin

Sullivan has a granite chin. He has been knocked down in prior bouts, but has risen to the occasion to finish strong.

Valera has a solid chin. He was the first opponent to overcome knockdowns and go the distance with knockout artist and current titleholder Dmitry Bivol.
Style

Sullivan is a technical fighter that likes to stick his jab and set up his shots. He also has a brawling style that inevitably comes out when his opponents show that they are willing to engage.

Valera is a knockout artist and a crafty southpaw who relies heavily on his power. He also likes to taunt his opponents, hoping to catch them off-guard and deliver one of his many thunderous blows.
Intangibles

Barrera has taken on some of the division’s best fighters in recent years. He has been extremely vocal about his desire to fight the best in the world on his way to a title shot. There are very few light heavyweights riding the same momentum and, after taking out two of the biggest punchers in the division in Joe Smith Jr and Vyacheslav Shabranskyy, he will risk his ranking against another heavy-hitter in Felix Valera. A win over Valera can almost guarantee Sullivan his long-awaited shot at the world championship.

In just 16 professional bouts, Felix Valera has already made a name for himself in the light heavyweight division. He earned the WBA world title in his 13th pro bout and although he lost the title in his next fight, he lasted 12rounds against one of the biggest punchers in the sport, Dmitry Bivol. Since then, Valera has gotten back to his winning ways and is aiming to seize an opportunity by taking out one of the hottest fighters at 175 lb in Sullivan Barrera. A win over Barrera will catapult him into the top of the ratings.
The Match-Up

1. Will Barrera be looking past Valera to future fights?
2. Is Valera in over his head with an active Barrera?
3. Will Barrera be able to handle the power of Valera?
4. Will Valera be mentally prepared for his first fight on US soil on such a big stage?

According Main Events’ matchmaker and 2015 NABF Matchmaker of the Year, Jolene Mizzone, “This is a fight in a very hot division. This is fight, like the main event, is must see! Both guys can punch, which means fans should not miss a minute or it could all be over. These two fighters want to prove they belong in the mix with all the champions and future champions in this division. This fight is not about whose zero will go, it is about who will prove they deserve a title shot next!”

Kovalev vs. Shabranskyy is a 12-round fight for the vacant WBO Light Heavyweight World Title promoted by Main Events and Krusher Promotions in association with Golden Boy Promotions and sponsored by Madoff Vodka and Leon.ru. Barrera vs. Valera is a 10-round light heavyweight fight promoted by Main Events in Association with Shuan Boxing Promotions. Gamboa vs. Sosa is a 10-round super featherweight fight promoted by Golden Boy Promotions in association with Peltz Boxing and ZR Entertainment. The event will take place at the Theater at Madison Square Garden in New York City, and will be televised live on HBO World Championship Boxing beginning at 10:00 p.m. ET/PT.