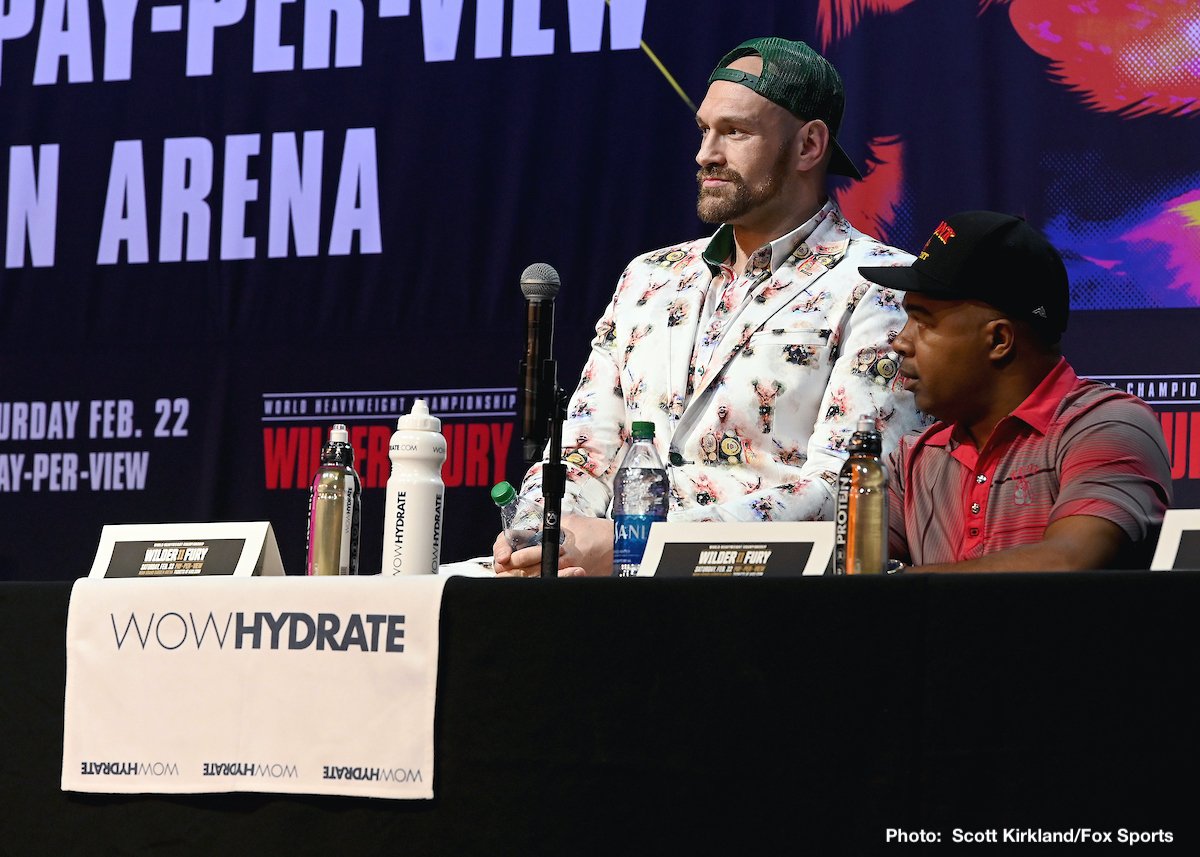 Few people, if any at all, believed Tyson Fury when he said at this week’s L.A Wilder/Fury II presser that he is going to “stand in mid-ring and slug it out with Wilder,” and “100 percent get a second-round KO win.” After all, Fury, a great taker who ALWAYS tries to get into the head of his rival, has spoken this way before; only for him to use his boxing skills and use his brains, not his brawn, in the ring.

Wilder certainly does not believe Fury will come and slug it out with him. But Fury’s old/new trainer Sugar Hill Steward (who has reunited with Fury having originally worked with him, alongside the late, great Emanuel Steward at Kronk) says that what Fury had to say in L.A was “no joke,” that, yeah, he IS looking for the KO on February 22.

Speaking with Fight Hub, Sugar Hill said that he is delighted Fury is talking the way he is talking, that he wants him to go and get the big KO. As he explained, Emanuel Steward always said that “the only 100 percent way to know you’ve won the fight is to get the knockout.”

“As a trainer, I’m happy [with what Fury says he’s going to do.] He knocks him out in the second round, we can go home,” Sugar Hill said. “What do you do, run from him, be scared of him? If you’re outboxing him, all you got to do is make one mistake and he catches you. This is the heavyweight division – anybody can be hurt. Just as Tyson went down (in the first fight), Wilder can go down as well. This is the heavyweight division. Anybody can be knocked out. A decision isn’t gonna get it. I was taught and trained by Emanuel – get the knockout. That’s the only 100 percent way, period.”

So there we are, we have been told again, by the fighter and now by the trainer, to get ready for a slugfest on February 22. Doubtless many fans will sill refuse to believe that these will be the tactics adopted by Team-Fury on the night, but what a great, great fight we would get if the two giants did, as Fury said, give us a “Tommy Hearns-Marvin Hagler type fight.”

Wilder will likely be licking his chops if Fury comes right at him, but who would land first? Will this fight, such a big and important fight, really come down to this? With Fury, you just never know for sure.

Email
WhatsApp
Tweet
Share
READ:
Tyson Fury Lays It Out: Wilder Would KO Joshua In Two Rounds
Previous boxing news: Adam Kownacki – Robert Helenius On For March 7th – Decent Or Disappointing?
Next boxing news: Round 12: Professional athletes in Tokyo 2020
You are here: Home / Boxing News / Sugar Hill Steward: I Was Trained And Taught By Emanuel – Get The Knockout!
Follow @boxingnews24