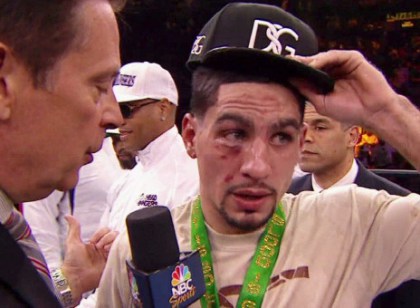 Professional boxing is a sport unlike any other. It is not scored by the passing of a ball through a net, nor the time it takes someone to cross a finishing line. Whilst there are objective mechanics in boxing, as in the case of a KO or foul, the majority of fights are scored by three judges placed at different points around the ring, who proceed to use a series of criteria to determine which fighter should be awarded the round. The scoring of rounds in professional boxing is not determined by quantitative criteria, i.e. the number of punches thrown/landed, instead judges score rounds using a combination of qualitative criteria, including clean punching, effective aggression and ring generalship.The person landing more punches can lose a round to the person throwing fewer, but more effective punches. That being said, there are of course specific scenarios which directly impact the score cards, as in the case of knockdowns and point deductions.

Controversy often arises when the public, or a certain portion of it, believe that the rounds of a fight have not been scored appropriately. This can occur when judges score a round favouring different criteria than the public, where a judge may favour the fighter using movement and flicking a jab, the public may instead favour the opponent pressing the action and throwing more punches. In many cases this situation can be the reverse, and the judge may favour the fighter pressing the action, even where few punches are being landed. When the fight is over and the scores are tallied it may be the case where the fighter who dominated five of the 12 rounds loses the fight on the cards because the remaining seven rounds were relatively close, leaving room for enough interpretation by the judges to cost them the fight. Rarely has this been more evident than with the recent bout between Danny Garcia and Lamont Peterson.

When the fight was announced, it was viewed by some as another relatively easy matchup for Garcia, who was coming off of a win against the vastly overmatched, and little known, Rod Salka, whereas Lamont Peterson had only recently suffered a KO defeat at the hands of Lucas Matthysse who, incidentally, Garcia had beaten. To others however it had the potential to be an intriguing matchup. The consensus on Danny Garcia has for some time been that he is not the most skillful fighter, though his technique has improved in recent years, that he doesn’t have the quickest hands, though he has an eye for timing and that he is not the most heavy handed, though his from behind the back, eyes shut, left hook is one of the more powerful punches at 140 lbs.

Despite Lamont Peterson’s relatively recent setback against Matthysse, he had since gathered a couple of wins. Peterson has a reputation for being a skilled boxer who has come up short on several occasions, however the one area in which he is known to excel is in his skill as an inside fighter. This is especially the case against an opponent without an inside game, as Peterson demonstrated against Amir Khan. Peterson is not heavy handed, though he has shown on multiple occasions to be deceptively strong and undoubtedly large for the weight, and he can set up shop on his opponent’s chest and land effective hooks to the body and head. He can bully an opponent once he gets into range, as seen in his aforementioned fight with Khan. What was of particular note in that fight, scoring controversy aside, was that Khan had so much difficulty keeping Peterson away from him that he resorted to shoving him away for breathing room, for which he was twice penalised by the referee.

Watching the Garcia – Peterson fight in real time, one of the feelings when the fight ended was that Danny Garcia had just been bullied, outboxed and generally outclassed by the more multi-dimensional Lamont Peterson. Garcia left the ring looking exhausted and bore the marks of a beating on his face, whereas Peterson looked calm, collected and relatively unscathed. Then the score cards were announced, reading 114-114, 115-113 and 115-113 in favour of Danny Garcia. Whilst there is a temptation to argue that Garcia had been ‘gifted’ another decision, especially after the Mauricio Herrera debacle, with the benefit of hindsight the fight was a clear example of the subjective nature of scoring in boxing.

Lamont Peterson left the ring looking to many the better fighter, due in large part to the fact that the rounds he was awarded on the scorecards were those in which he dominated the action. Garcia, by comparison, picked up the majority of rounds on the majority of cards due to his work rate, and the lack thereof from Peterson, as well as the fact that he was instigating the action. In those early rounds Peterson was using lateral movement to make Garcia miss and tire himself out. Peterson was successful in doing so, certainly he made Garcia swing wildly at nothing but air on multiple occasions, however Peterson was ultimately undermined by his failure to throw more meaningful punches in those rounds other than the odd jab. The early rounds were nevertheless close, leaving the judges enough room to interpret whose work was more effective.

Scoring controversy will never be removed from the sport of boxing. Whilst there are, unfortunately, fights in which the quality of scoring is poor enough to constitute a ‘robbery’, that is in fact a separate issue to the issue of controversial scoring in close fights, as was the case with Garcia-Peterson. Boxing is a sport unlike any other, in that when a fight is determined by a score card, the winner has been determined by criteria more subjective than that determining a winner in any other sport. The way in which rounds are scored may not always accurately represent the narrative of a fight, but that is simply because the narrative may be interpreted differently by different people.