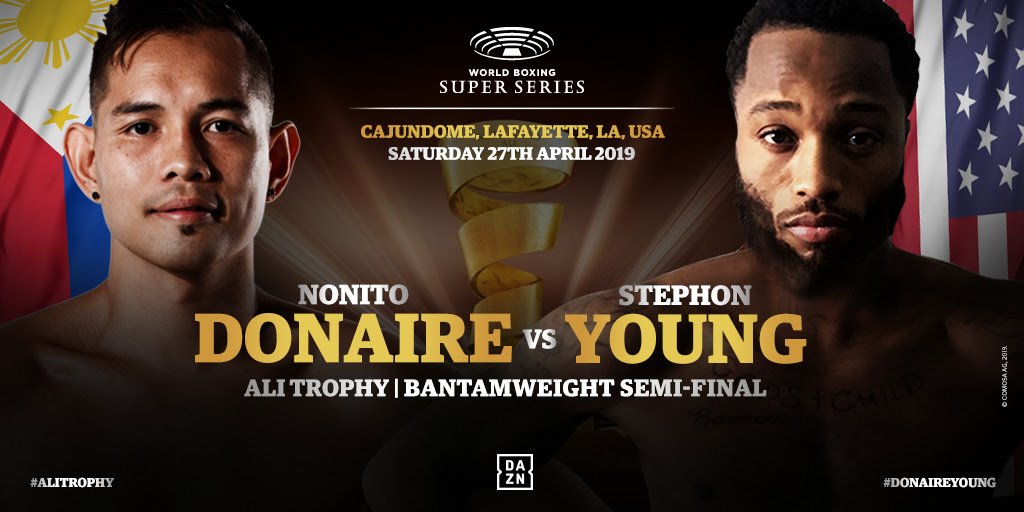 Stephon Young (18-1-3, 7 KOs) of Saint Louis, Missouri, USA, the WBA No 5 contender and official WBSS super-lightweight reserve replaces Zolani Tete in the bantamweight semi-final against Nonito Donaire due to an injury in the right shoulder of the South African WBO Champion.

“I was walking in circles for ten minutes eyes full of tears of joy. I felt amazing with the news,“ said Young about receiving the news that he is entering the World Boxing Super Series. “It’s a real dream come true to be in this position.”

Young, also known as the ‘Showstopper’, is now on his way to Lafayette, Louisiana for Saturday’s semi-final at the Cajundome instead of fighting his scheduled fight on the undercard against Daniel Lozano.

“It doesn’t matter who I fight. I’m coming in to win vs anyone I step in there with. My mindset is strong. I have the utmost respect for Nonito. He is a great fighter and from what I see he’s a classy fighter outside the ring as well.

“I feel I will handle the big stage quite well and I rate my chances very, very good.”

The World Boxing Super Series’ format meant Young was already on standby as a reserve and fighting in the co-feature, and as the tournament’s Chief Boxing Officer Kalle Sauerland explains he will now have the golden opportunity to earn a place in the final against either Naoya Inoue or Emmanuel Rodriguez in the final.

”It is very, very unfortunate for Tete, particularly after such a strong belief in going all the way and win the Ali Trophy,” said Sauerland. “Fortunately, we are prepared for such eventualities and the tournament will move forward with our reserve fighter Stephon Young, ranked number five in the world, facing Nonito Donaire in the semi-final in Lafayette this weekend.”

“It is very sad and disappointing for myself and my team that we have to pull out of the fight this Saturday,” said Tete at Wednesday’s press conference in Lafayette. “We were looking forward to the fight, but to fight such an incredible opponent like Nonito Donaire you need to be one hundred percent.

“I hurt myself on my right shoulder on Monday when I was doing pads in the evening. I told my team there is something funny in my shoulder, but that it was nothing serious. The following day I was doing a light session, but I could feel this thing and when I went bed to bed I couldn’t sleep properly. We went to the doctor who discovered tendonitis in my shoulder and he could see it was inflamed.

“I got some treatment, but the shoulder was still painful. I’ve been trying my best since yesterday to recover from the injury, but I couldn’t so we had to the that hard decision.”

The WBO World Bantamweight Champion believed he was on the path of winning the super-lightweight tournament and take home the Ali Trophy.

“I have been working so hard, and I believed in myself and now this thing happens. I know I was capable of winning the tournament and the Muhammad Ali Trophy. It is devastating. My dream is not coming true.”

Tickets starting at $25 for the WBSS Super-Lightweight and Bantamweight Semi-Finals on April 27 at the Cajundome in Lafayette, LA are available from TicketMaster here.