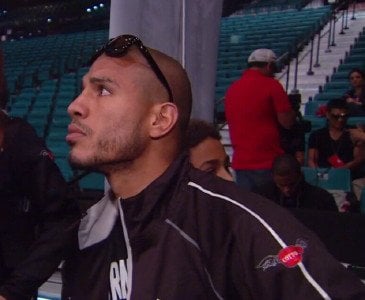 Saturday night in Orlando, Florida, world rated contender Delvin Rodriguez, 28-6-1 16KO’s, Danbury, CT steps into the ring with future Hall of Famer and three time World Champion Miguel Cotto, 37-4 30KO’s, Caguas, PR in a bout that will be televised live on HBO. While Delvin has had many opportunities in his long career including two world title fights, multiple title eliminator’s, and numerous ESPN appearances, this opportunity presents Delvin’s biggest yet, against a legend as the main event on the ‘legend of boxing networks’, HBO.

Many have credited Star Boxing’s relentless efforts on behalf of its fighters as a reason for Delvin’s consistent ability to participate in so many high profile bouts and be the recipient of so many opportunities. Star Boxing, unlike many other sports entities, as a knack for rebuilding its talent. In Delvin’s instance, Star Boxing has continually provided National TV fights for Delvin, and has stood behind him where many others might have given up.

While Star Boxing President/CEO Joe DeGuardia acknowledges his efforts on behalf of Delvin, he credits Delvin. “Delvin shows up like a true professional every time and gives his best each time out. This has endeared him to boxing fans throughout the world. In addition, he is unfortunately received the short end of the stick on 4 of his 6 defeats. Those majority and split hometown decision losses in Poland and South Africa are disappointing, but did not break him. His record could just as easily be 33-2, and he deserves these opportunities. I am just pleased that we have been able to provide them for him.”

Most fans will remember the Star Boxing promoted “Fight of the Year” between Delvin and Pawel Wolak. The fight was widely seen on ESPN “Friday Night Fights” series and it is still talked about two years later. Through the efforts of Star Boxing, Delvin has appeared on ESPN more than any other fighter in the last few years.

The uniqueness of the relationship between Delvin and Star Boxing has enabled Delvin to get all these opportunities. Delvin puts complete, unconditional trust and faith in Star’s ability to move his career in the right direction. Star’s faith in Delvin is unwavering and founder Joe DeGuardia hopes lighting strikes again when he took a virtually unwanted fighter in Antonio Tarver and maneuvered him into multi million dollar fights and boxing stardom.

The fight with Cotto promises to be a slugfest as are most of Delvin’s fights and the real winners will be the fans who tune into HBO this Saturday night. The trend lately has been for fighters comparable to Delvin, who step into the ring as an underdog against a well known fighter, and come out either victorious in the ring or victorious with the fans and many hope and expect the same from the likable Delvin Rodriguez.