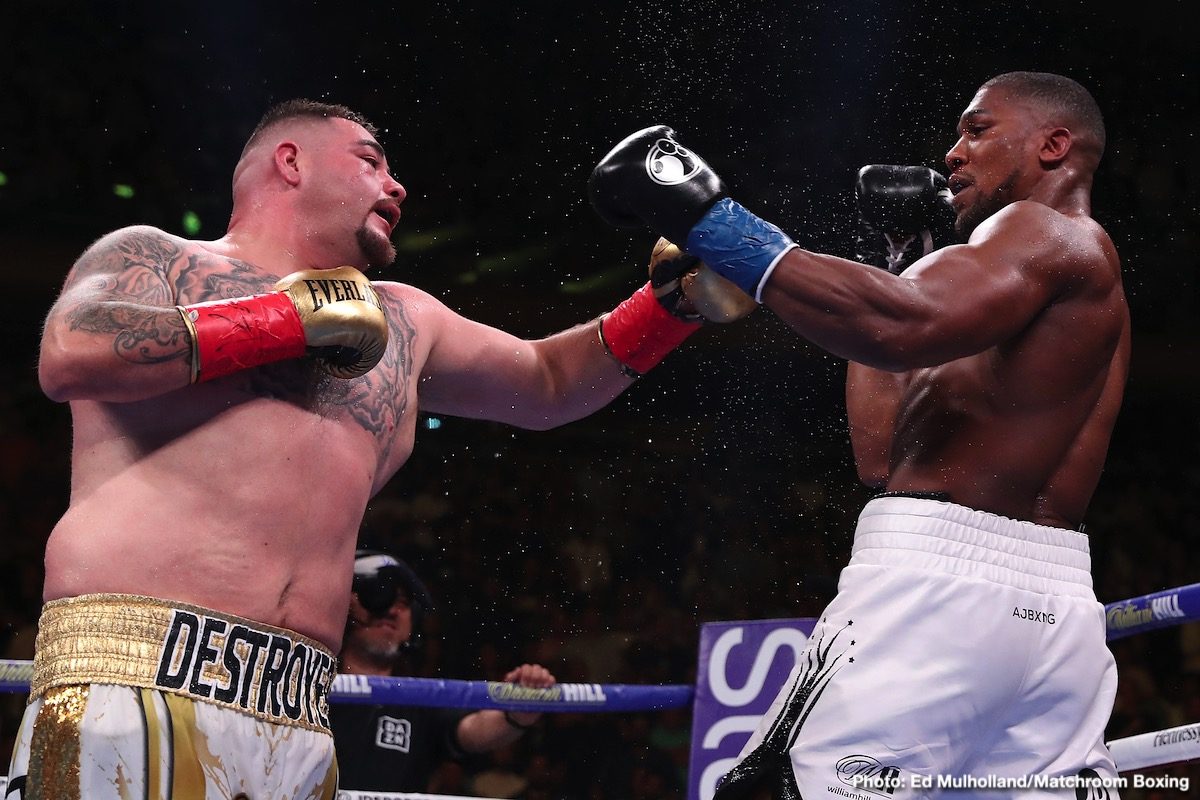 The great thing about writing a pre-fight prediction on a boxing forum, is the fact that what was written is dated and it goes into the archives. Then, when the fight is history, whether you were correct in your prediction of who would win and how, or if you were dead wrong, there is no denying what you stated would happen.

In an article written by yours truly – date May 7, right here on ESB – the headline asked the question: What If: Andy Ruiz beats Anthony Joshua? It’s fair to say, the article generated some interesting comments to say the least. Some posters flat-out called me dumb (or words to that effect) for even asking such a question. While others claimed Ruiz had absolutely no chance of winning.

Now, I cannot take credit for having picked Ruiz to beat Joshua, but here is what I did write:

“Which brings us to Andy Ruiz and his upcoming challenge of Joshua, who of course holds three belts: WBA/WBO/IBF. What would happen if the game and hungry (no gags please) Mexican/American pulled off the upset on June 1? It’s not likely to happen but it sure could happen. After all, the best time to score an upset is when your opponent is taking you and your style of fighting at short notice; having trained for another guy.”

Again, some posters came in hard and heavy, refusing to take Ruiz seriously. Here are some of the more aggressive things fans posted just about three-and-a-half weeks before Ruiz pulled off his great upset win:

Informer3 wrote: “What if: Andy Ruiz beats Anthony Joshua? Then Buster Douglas will come out of retirement and beat him.”

Swedish Boxing Fan wrote: “Never-Never-Never going to happen. This is arguably the safest world heavyweight title fight in decades. It is a walk in the park victory for Joshua and because of that, the fight offers nothing of interest at all.”

Tepee wrote: “This is a safe fight once again for AJ. I won’t buy any of fake champion’s fights unless he fights Wilder. You have to be stupid to buy this fight. Ruiz is a punching bag. Hearn is a BS promoter that is conning the fans with these weak fights to make his cash-cow look good.”

Dilbert113 wrote: “It would be a much bigger upset than Buster Douglas vs. Mike Tyson. Frankly, I think fat tub of lard Ruiz will be lucky to make it past the 6th round.”

Kid Blast wrote: “One of the more bizarre threads in ESB history.”

Boxtradamus wrote: “If he wins then go grab your gun and fire up the grill!!!! Because pigs are flying.”

And my favourite, from Medlar, who wrote: “If he does, I will show my arse in Fenwick’s window, that’s a local Geordie joke (North East England).”

We all owe Andy Ruiz one big apology. Will fans be more respectful when posting their opinions on what will happen when a prize fighter, one of the bravest of men, next fights? Probably not. Maybe this is why some fans are referred to as ‘internet tough guys?’

In the end, though, Ruiz got the last laugh, didn’t he!

Email
WhatsApp
Tweet
Share
Previous boxing news: Wilder Says Joshua “Quit” Against Ruiz: These Guys Have Got To Literally Kill Me In The Ring
Next boxing news: So Who’s The Top Dog At Heavyweight? A New Top-10
You are here: Home / Boxing News / Some of The Fight Fans Andy Ruiz Proved Wrong……and what these fans said before Ruiz defeated Joshua
Follow @boxingnews24