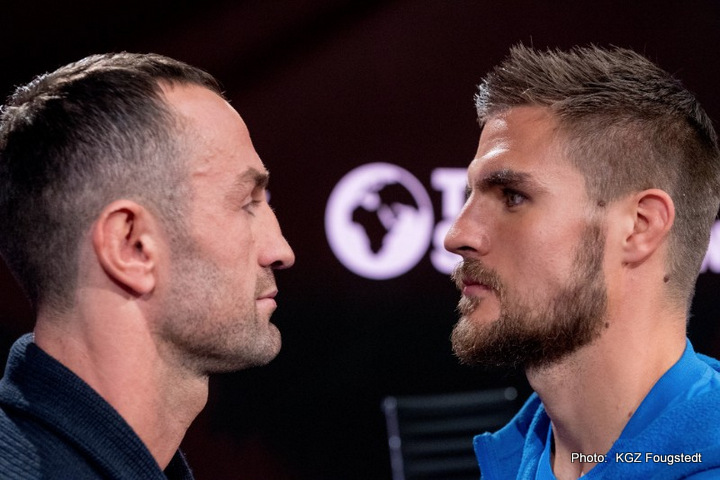 Erik Skoglund (25-0, 11 KOs) and Timy Shala (21-1-1, 8 KOs) both made weight today ahead of their WBA International Light Heavyweight Championship contest tomorrow night at the Rosvalla Arena in Nyköping, Sweden.

Here is a list of the official weights from Nyköping:

Erik Skoglund (25-0, 11 KOs) and Timy Shala (21-1-1, 8 KOs) came face-to-face for the first time today at the final press conference ahead of their WBA International Light Heavyweight title fight on Friday night at the Rosvalla Arena in Nyköping, Sweden.

The stakes are high for Skoglund as he returns to his hometown arena knowing that victory over ‘The Albanian Bomber’ will set him up for either a European or World title shot in 2017. The undefeated 25 year-old is currently mandatory challenger for Robert Stieglitz’s European strap, and highly ranked with all four major governing bodies, is within touching distance of a World title challenge.

‘’I’m looking forward to fighting once again in my hometown,’’ said Skoglund. ‘’There are a lot of big fights out there for me next year, but I know I cannot afford to overlook Shala. This is an extremely important fight for me, if I lose this, I lose everything I have been working towards.

‘’I’m expecting a tough fight. Shala is a different type of fighter than my last two opponents. Both Edwards and Liebenberg were tough sluggers, whereas Shala is more of a schooled technical fighter, similar to me, and I think that will make for a great match up for the fans.’’

The Kosovo-born Shala has travelled from Austria hoping to upset the home fighter and land his own World title opportunity.

‘’I’m very happy to be here in Sweden and looking forward to a great fight,’’ he says. ‘’I know Skoglund is a good boxer, but I’m confident I can win. This is a big chance for me to prove I’m ready for a World title fight, and I will give everything for a victory for Friday.’’

A star-studded undercard includes the Swedish Light Heavyweight title fight between Naim Terbunja (10-1, 1 KO) and Sven Fornling (10-1, 6 KOs), who have not been short of words in the build up to their domestic showdown, and continued to exchange barbs at today’s press event.

‘’Sven’s a tough guy and I’m sure he will give me a good workout, but he’s not on my level when it comes to boxing,’’ said the 2008 Olympian Terbunja. ‘’I think people will be surprised by how one-sided this fight will be.’’

‘’There’s been a lot of talk about this fight already, and to be honest, I’m tired of hearing about Naim and his amateur career,’’ said Fornling. ‘’On Friday night, I’m going to beat the hell out of him, simple as that!’’

Also on the card is WBC Female World Super Welterweight Champion Emeritus Mikaela Laurén (27-4, 12 KOs), who makes her ring return following a high profile defeat to Klara Svensson, and the Stockholm fighter is eager to get back to winning ways when she takes on Szilvia Szabados (14-7, 5 KOs).

‘’It’s been tough to come to terms with the loss to Klara,’’ she said. ‘’Things didn’t go my way that night, and I didn’t perform the way I know I can, but now, I’m looking forward to getting back in the ring, and showing the real me. I want to end the year on a high with a good performance on Friday night.’’

Tickets for the Nordic Fight Night event on Friday in Nyköping are available online via http://www.biljettforum.se or by calling 0771-130 150.

All the action will be shown live and exclusive in Scandinavia on Viaplay Fighting. For more information please visit http://www.viaplay.se.

Skoglund ready for Shala: ‘’I feel stronger than ever

Erik Skoglund (25-0, 11 KOs) believes he is in the best possible shape as he approaches his WBA International Light Heavyweight Championship clash with Timy Shala (21-1-1, 8 KOs) on Friday, December 9 at the Rosvalla Arena in Nyköping, Sweden.

The 25 year-old has just returned from a three-week warm weather training camp in Torrevieja, Spain, and will now complete the final stages of his preparations at home in Nyköping. Having swapped the snow and sleet of Sweden for the sun and sea of the Spanish costal town, Skoglund credits his time abroad with helping him reach optimum condition for his fight with ‘The Albanian Bomber’.

‘’It was good to spend this time away to really focus on my training,’’ he said. ‘’There is a great gym in Torrevieja, tough sparring and of course, the weather is lot nicer there than in Sweden. I’ve trained there before in between fights, but this is the first time I’ve come for a full training camp, and I can really feel the benefit. Although, I am happy to now be back home.’’

‘’I’ve had some great sparring with Mariano Hilario, the current EBU-EU Super Middleweight Champion, he is a very skilled fighter and quick too, and now, I’m back in Nyköping, I’ve brought in another sparring partner to mix it up.

‘’I’ve also been following a strict training programme set by my strength and conditioning coach David Wahlgren. He’s been a big help for me since recovering from my back injury, and I know if I follow his advice, I’ll be in top shape on December 9.’’

In 2015, Skoglund underwent a serious back operation to repair a herniated disc, but having been able to put this injury behind him, the 25 year-old says his fitness is now better than ever.

‘’I think I’m reaching new levels with my fitness all the time,’’ he says. ‘’After my injury there were certain things I couldn’t do, or had to be careful of. I wasn’t able to push myself to the limit, but now, there is nothing I can’t do, and I feel stronger than ever!’’

Erik Skoglund faces Timy Shala for the WBA International Light Heavyweight title on December 9 at the Rosvalla Arena in Nyköping. Tickets are available online via http://www.biljettforum.se or by calling 0771-130 150.

All the action will be shown live and exclusive in Scandinavia on Viaplay Fighting. For more information please visit http://www.viaplay.se.