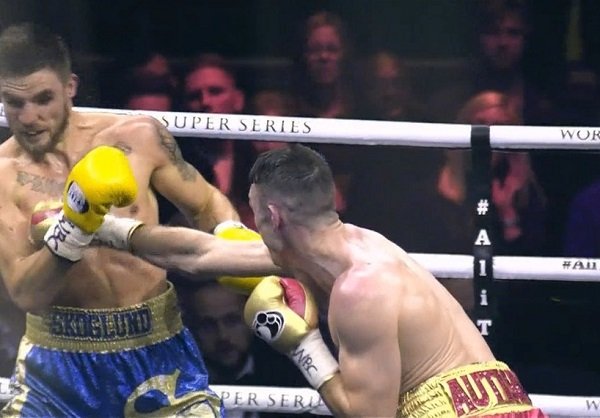 Callum Smith (23-0, 17 KOs) fought an excellent fight in beating Erik Skoglund (26-1, 12 KOs) by a 12 round unanimous decision in super middleweight action on Saturday night in his first fight in the quarter finals of the World Boxing Super Series at the Echo Arena in Liverpool, England. The 6’3” Smith unloaded on Skoglund in round 11 to knock him down.

With the win, Smith captures the vacant WBC diamond belt.

The positives from Smith’s performances are as follows:

The Negatives from Smith’s fight against Skoglund:

– Easy to hit. Skoglund had it easy when he was looking to land his shots.

Smith was coming off of a 9-month layoff to take this fight against Skoglund, and it sure showed. Smith’s power was extraordinary, but he wasn’t fighting well in the middle rounds. Skoglund had a lot to do with that. Skoglund had a lot to do with that, as he took the fight to Smith and was able to land some nice shots that got Smith’s attention in the fight. Skoglund showed that Smith isn’t a guy that is going to dominate his opposition like we’ve seen from some fighters in the super middleweight division over the years. There isn’t anybody remaining in the division that is going to be able to fight at the same level as guys like Andre Ward and Cark Froch did when those 2 guys ruled the 168-lb. division in the past. Callum Smith doesn’t possess that type of talent unfortunately.

The win for Smith moves him on. He’ll have problems when he gets inside the ring with George Groves and Chris Eubank Jr. those guys are fighting at an elevated level right ow. For Smith to beat them. he’s going to need to fight at a near perfect manner.

In other results on the card: