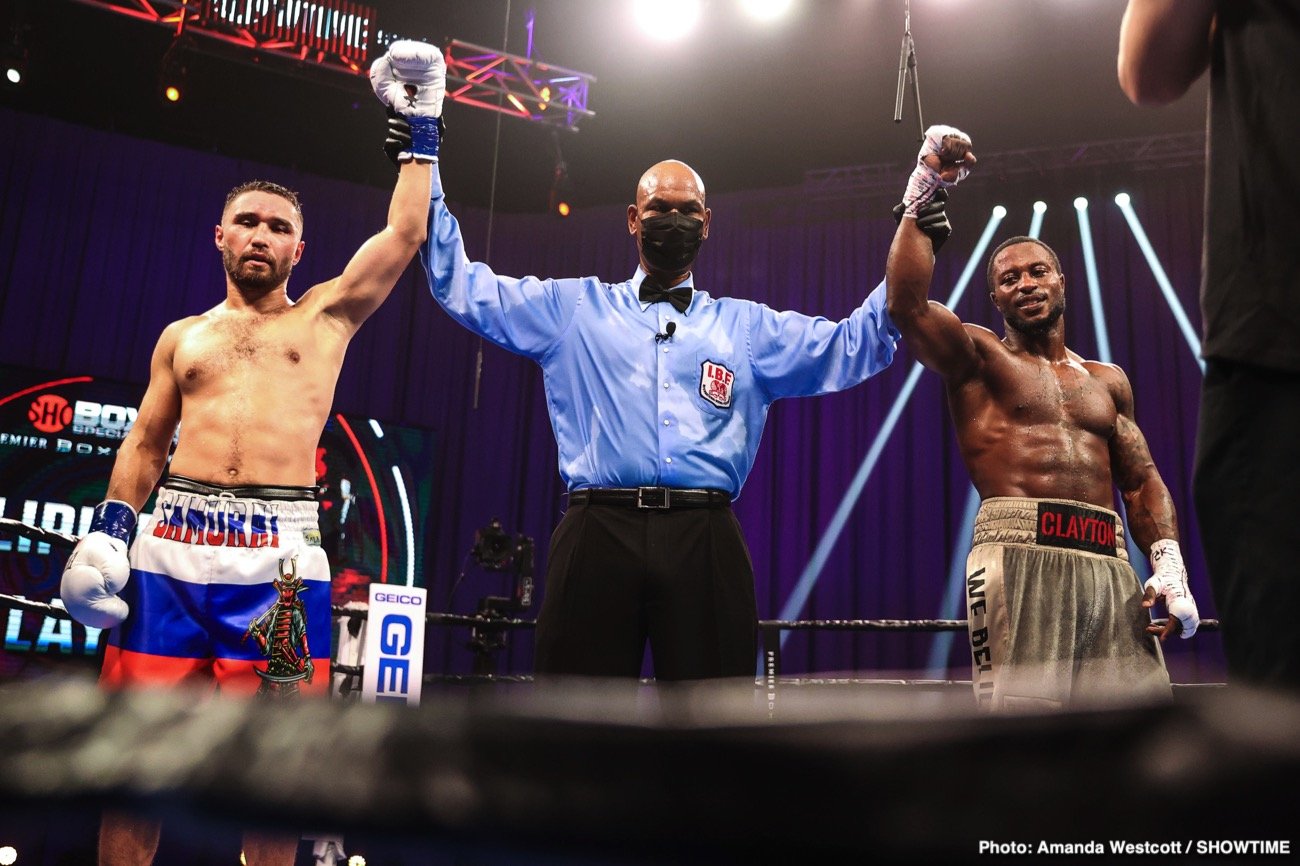 When writing articles meant to predict the outcome of upcoming fights, I try to be as objective as possible when examining match-ups. I take into the account the various attributes of each boxer, their respective fighting styles, and then make my prediction of how the fight will unfold based on my impression of how the two boxers compare to one another.

Sometimes those predictions are correct. Other times…not so much. Either way, any predictions made in articles like these are usually the result of whatever research I’ve done on the fighters in question. In general, I try to remove personal bias, and keep my preference for one particular fighter separate from the prediction.

But, this time, as I review the upcoming Custio Clayton-Sergey Lipinets fight that serves as the main event an intriguing PBC triple-header on Showtime, I realize that my desire to remain objective and impartial has gone flying out the window.

I’m rooting openly for Clayton (18-0, 12 KO’s) to upset the former IBF 140lb titleholder this evening, secure the interim IBF world welterweight championship, and then move on to bigger and more lucrative fights against fighters like Shawn Porter, Danny Garcia, and fellow 2012 Olympian Errol Spence Jr. He and I both hail from Nova Scotia, and I’m hoping that any success Custio enjoys at world level will breathe new life into this province’s once-thriving fight scene. Even if that doesn’t happen, it’s nice to see someone from your home area perform well at the highest level, especially if you enjoy their smooth and crafty style of boxing. 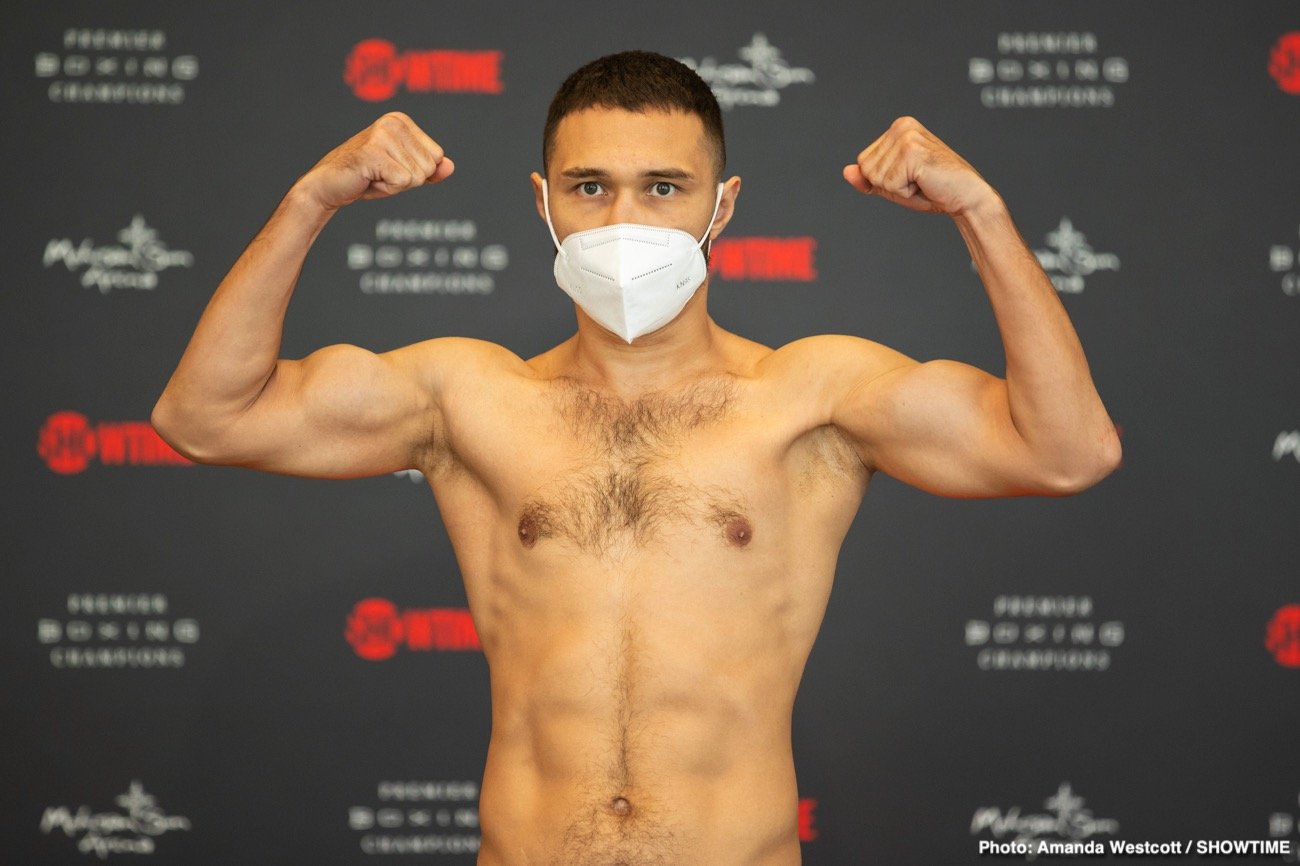 That’s not to say that I bear Sergey Lipinets (16-1, 12KO’s) any ill will. I actually enjoy watching “The Samurai” fight. He’s heavy handed, ultra-aggressive, and often appears disgusted at the idea of taking a backward step. What’s not to like? Against another opponent, I’d be happy to wish him success.

However, he’s in against Clayton this evening, and the part of me that’s a fan of my fellow Canadian doesn’t have any desire to do that. That part of me wants nothing more than to watch “The War Machine” score a clear, decisive win over the Kazakhstani Russian and won’t entertain the possibility of any other outcome.

But, there’s another part of me that understands that you, dear reader, probably would like to read something other than words in support of a favored fighter. So, with that in mind, the objective side of me will tell the fanboy to give it a rest for a moment, and attempt to provide a more substantial breakdown of this match-up.

Lipinets, as mentioned before, is a pressure fighter who likes to back his opponents to the ropes, and then batter them with a variety of hooks and uppercuts. He doesn’t necessarily possess world ending power in either hand but every shot he throws tends to connect with at least some authority, which makes it more difficult for his opponents to retaliate as the fight wears on. 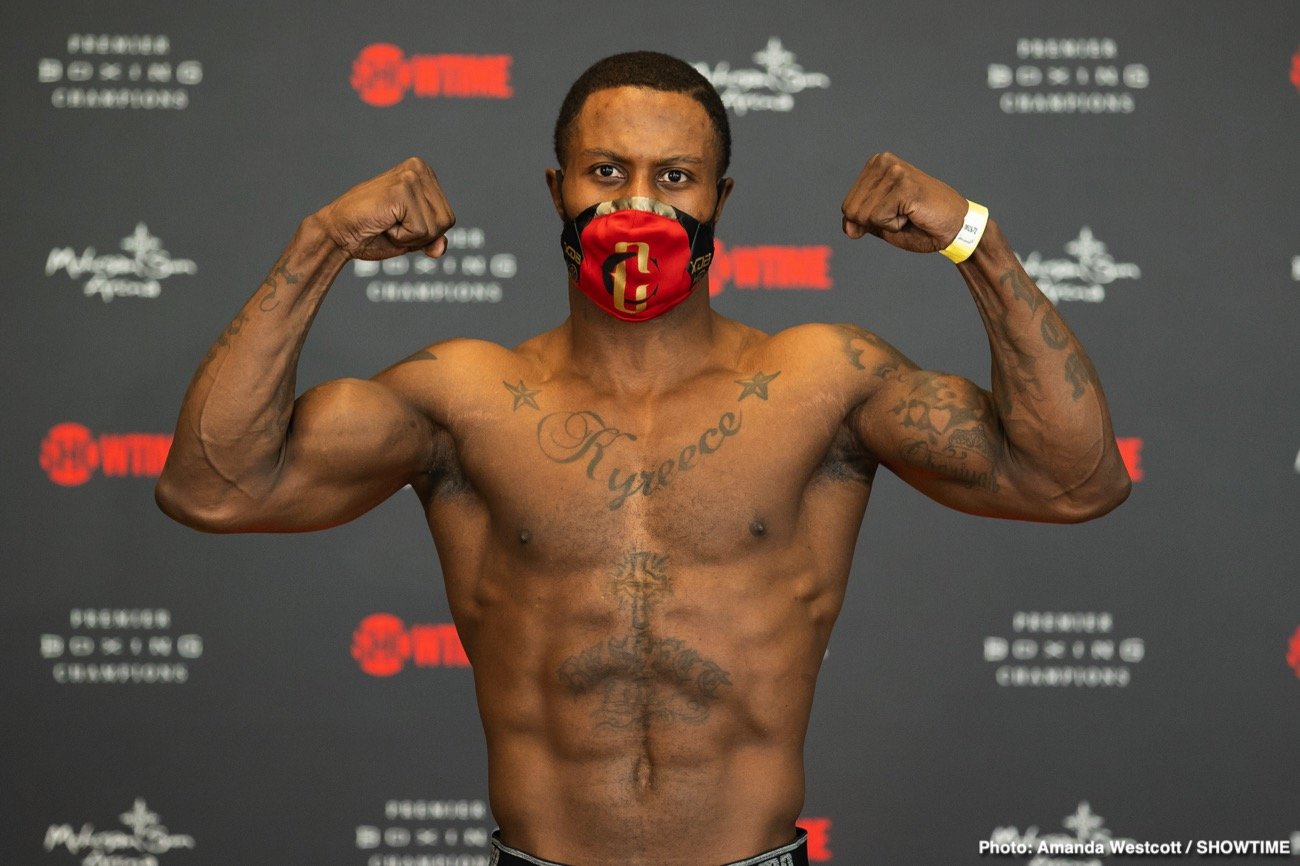 That said, he’s not nearly as effective at range as he is inside, nor is he quite as effective at defending as he is on offense. The determined but relatively unspectacular Akihiro Kondo was able to land with more frequency than expected during their 2017 140lb title fight. Mikey Garcia connected pretty regularly with the one-two en route to a competitive but clear decision over Sergey in early 2018. Later on that year, Ecuador’s Erick Bone was able to keep Lipinets at bay for much of their ten rounder before dropping a highly dubious ten round majority decision.

These examples lead me to believe that Clayton can also enjoy some success against The Samurai. While he hasn’t faced a particularly notable selection of opponents thus far in his career, he has displayed enough quality to make it apparent that he isn’t out of his depth against the Russian. Clayton has displayed impressive versatility, being capable of fighting equally well off the front and back foot. He’s got a solid jab, a sharp and accurate right hand, and a pretty sound defense. Moreover, he’s got an underrated body attack that has resulted in several stoppages-including a rare body jab KO of Diego Ramirez in his last fight.

Obviously, it’s unrealistic to expect Custio to replicate that particular result this time around, but I can definitely see him using the jab and straight right to bank a few early rounds off a fighter who will be coming into this fight off a layoff of over one year. I can see him landing to the Russian’s body with enough frequency to take some steam out of the latter’s punches as the round goes on, making it harder for him to stage a later round surge. And, I see Clayton being able to maintain his composure, defending effectively when and if that surge finally comes and fighting back well enough to ensure that he can make it to the final bell with the lead intact.

In short, the objective side of me thinks the taller, naturally larger Clayton’s technical acumen matches up pretty well against his smaller, less versatile opponent, and is picking him to win a close but clear decision against the best opponent he’s faced to date

The fanboy in me, naturally, agrees completely with this assessment.

The other two fights on the Showtime card being held at the Mohegan Sun Casino in Uncasville, CT don’t carry the same emotional investment for me, but are certainly interesting match-ups in their own right.

In the first fight, an undefeated member of Floyd Mayweather’s TMT stable, Malik Hawkins (18-0, 11KO’s), faces Puerto Rican power-puncher Subriel Matias (15-1, 15KO’s) at junior welterweight. Neither fighter had a particularly great outing in their last fight; Mathias faded badly in the later rounds of his fight with Petros Ananyan, was dropped in the seventh and suffered his first career defeat, while Hawkins was outboxed through the first four rounds before gaining an unlikely win after Price couldn’t continue due to a knee injury.

Matias has faced the better class of opponent and as a result is considered to be the favorite by most observers. That said, I have a feeling that Matias’s straight forward style might play to the strengths of his taller opponent, and I also can’t help but wonder if Matias will ever completely regain the same type of aggression he displayed prior to his ultimately tragic win over Maxim Dadashev. With those questions in mind, I’m picking Hawkins to spring the upset-even though he may well have come from behind to do it.

The second fight features another member of the The Money Team, Xavier Martinez (15-0, 11KO’s) taking on veteran Claudio Marrero(24-4, 17KO’s) in a crossroads fight. Martinez has looked spectacular during his tenure on Shobox, but Marrero has on more than one occasion displayed the speed and power needed to score upsets over undefeated prospects. However, the Dominican suffered a one sided drubbing at the hands of Kid Galahad in his previous fight, and may well not be the same fighter following that harrowing defeat. Even if he’s completely recovered, Martinez looks to have enough speed, skill and power to overcome anything Marrero might have to offer, and I’m picking him to win via mid rounds stoppage. 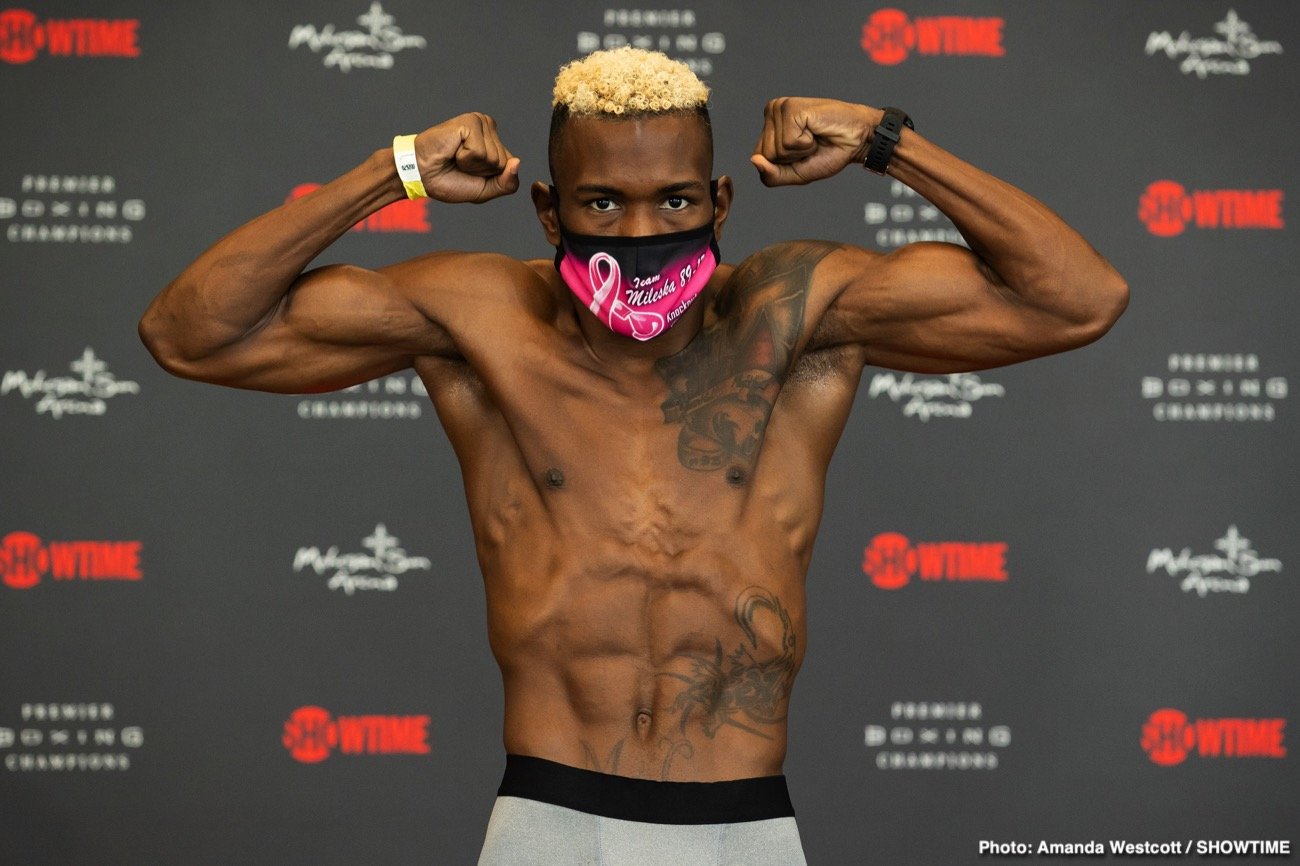 So, those are my opinions on what appears to be an interesting and well matched fight card.

Let’s hope that it provides enough entertainment to satisfy every objective observer and unabashed fan that chooses to watch it.