The win puts Philadelphia’s Ennis (27-0, 25 KOs) one step closer to his first world title opportunity as he dismantled the former 140-pound world champion over six rounds of their welterweight battle. As he has done often throughout his career, the 23-year-old switched effortlessly between an orthodox and southpaw stance and exhibited tremendous power from both sides. Ennis finished the fight with an eye-popping 53% connect rate on his power punches and out-landed Lipinets 91 to 48. 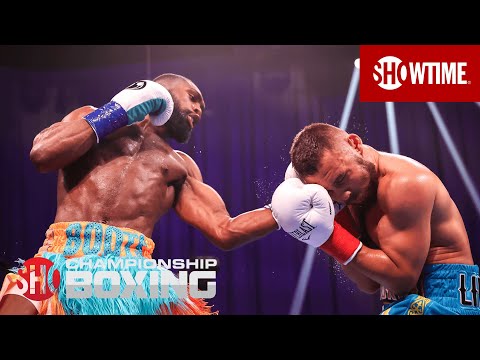 “I’ll always be hard on myself when I look back at my performance,” said Ennis. “My goal is to keep getting better, sharper, faster and stronger so I can become world champion. As long as I keep fighting top guys, I’m happy. I feel like I will be world champion by the end of this year or beginning of next year. Patience is the key though.”

The 32-year-old Joe Goossen-trained Lipinets (16-2-1, 12 KOs) of Woodland Hills, Calif., showed determination in weathering the onslaught of combinations from Ennis. An uppercut floored the Kazakhstan-born Lipinets and sent him to the canvas for the second time in his professional career in the fourth round. Prior to tonight, Lipinets had only been down in his other professional loss which came at the hands of four-division world champion Mikey Garcia.

“Lipinets has been in there with the best before, so I wasn’t surprised he held up for a while,” added Ennis. “I knew he’d be durable. That’s why I didn’t jump on the gas right away. I just took my time and broke him down.”

In the sixth round, Ennis poured it on Lipinets from all angles as he beautifully assembled combinations. The budding superstar has yet to go past the sixth round in his professional career as he has amassed a remarkable 89% knockout ratio. Ennis was up 49-45 on two scorecards and 50-44 on the final judges’ card prior to the right hook to left uppercut combination that resulted in the fight being stopped at 2:11 of round six. Saturday night marked Ennis’ first time headlining SHOWTIME CHAMPIONSHIP BOXING

“I think I graduated tonight,” stated Ennis. “It’s on the up and up now. It’s onto bigger and better fights now.”

In the SHOWTIME CHAMPIONSHIP BOXING co-feature, a pair of hard-hitting welterweights went toe-to-toe as Eimantas Stanionis (13-0, 9 KOs) beat former world title challenger Thomas Dulorme (25-5-1, 16 KOs) via unanimous decision in a WBA Welterweight Title Eliminator. This was the most difficult challenge of the rising 26-year-old’s career as Dulorme took him past the ninth round for the first time. The three ringside judges scored the fight 115-113, 116-112 and 117-111. 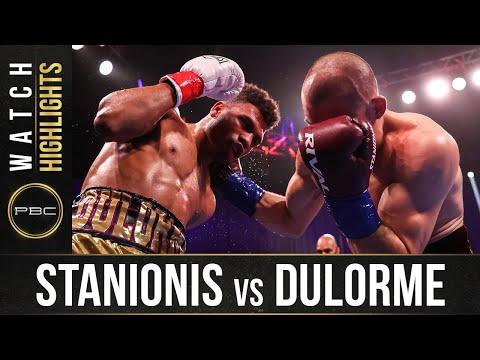 “It’s been a dream since I was a kid watching SHOWTIME to be on this stage,” said Stanionis. “I’m proud of what I’ve achieved. I’ve had a long hard journey to get here, but it’s been worth it.”

The two fighters combined for nearly 1,400 punches in their exciting welterweight battle. Stanionis outlanded the 31-year-old Dulorme 232 to 193 and edged his opponent with higher connection percentages across the board. Most notably, Stanionis worked well behind his powerful jab, landing 123 total throughout the 12-round fight.

“Dulorme always threw back at me, even if I hurt him,” stated Stanionis, who is one step closer to becoming Lithuania’s first world champion. “I knew that if I was wild, he could have caught me with a good shot. I have more confidence in myself now because I know I can go 12 rounds with a good fighter. I know how the pressure will hit me now. Anything can happen in this sport, so I made sure I was prepared coming into this fight.”

In the 10th round, a nasty cut opened above the left eye of Dulorme which was ruled by referee Harvey Dock to have resulted from a punch. The fight came to a fantastic finish as the Lithuanian prospect went for the knockout in the 12th round but the veteran Dulorme did not subdue to the pressure.

In the telecast opener, IBF Junior Bantamweight World Champion Jerwin “Pretty Boy” Ancajas (31-1-2, 22 KOs) successfully defended his title for the ninth time with a unanimous decision victory over Jonathan Rodríguez (21-2, 16 KOs) in an action-packed 12-round affair. The victory extends Ancajas’ streak of consecutive title defenses to nine, which marks the most of any current world champion. Fighting out of the Philippines, the 29-year-old controlled the pace of the fight with a consistent dedication to the body, where he landed 131 of his 232 total punches.

“I’m very happy to get the win. I waited a long time for the opportunity to get back in the ring and it’s exciting to win in my first fight on this stage fighting on SHOWTIME,” said Ancajas. “This was my toughest fight so far. It was the hardest of any of my nine defenses and it’s exciting that it was on a big card. I trained hard for this opportunity and it feels great to get the win.”

The title fight featured back-and-forth action with Mexico’s Rodriguez pressuring and baiting the champion to fight him at close distance. At the end of the eighth round, Ancajas finished a flurry of punches with a huge right hand that sent Rodriguez to the canvas for the first time in his career.

“I thought he was going to be stopped because I saw him look at his corner and it didn’t look like he wanted to go on,” continued Ancajas. “But he got up and fought and I respect him for doing that.”

The ringside judges scored the fight 115-112, 116-111 and 117-110 for Ancajas, while unofficial ringside scorer Steve Farhood tallied the fight at 114-113. Farhood agreed with the three official judges in giving the final three rounds to Rodriguez. Despite dropping the decision, the 25-year-old Rodriguez impressed fight fans with his tremendous determination and high-level skill in his first world title fight and U.S. debut.

“I don’t think it was a just decision,” said Rodriguez. “I thought maybe a split decision, and I would accept it a little more. But we knew coming in that the judges were against us in this fight.”

On Friday night, BELLATOR on SHOWTIME took center stage at Mohegan Sun Arena with the first fight of the BELLATOR MMA Light Heavyweight World Grand Prix that saw current heavyweight champion Ryan Bader avenge his 2012 loss to Lyoto Machida with a dominating unanimous decision to move onto the next round. Bader made an appearance on Saturday’s SHOWTIME CHAMPIONSHIP BOXING telecast to reflect on his impressive victory.

“It was very sweet [to get revenge]. It was a gauge to see how far I’ve grown, since 2012. And I’ve done a lot, and he’s done a lot. So to go out there and implement my game plan and stick to what we do and go out there and be victorious, it couldn’t be sweeter.”