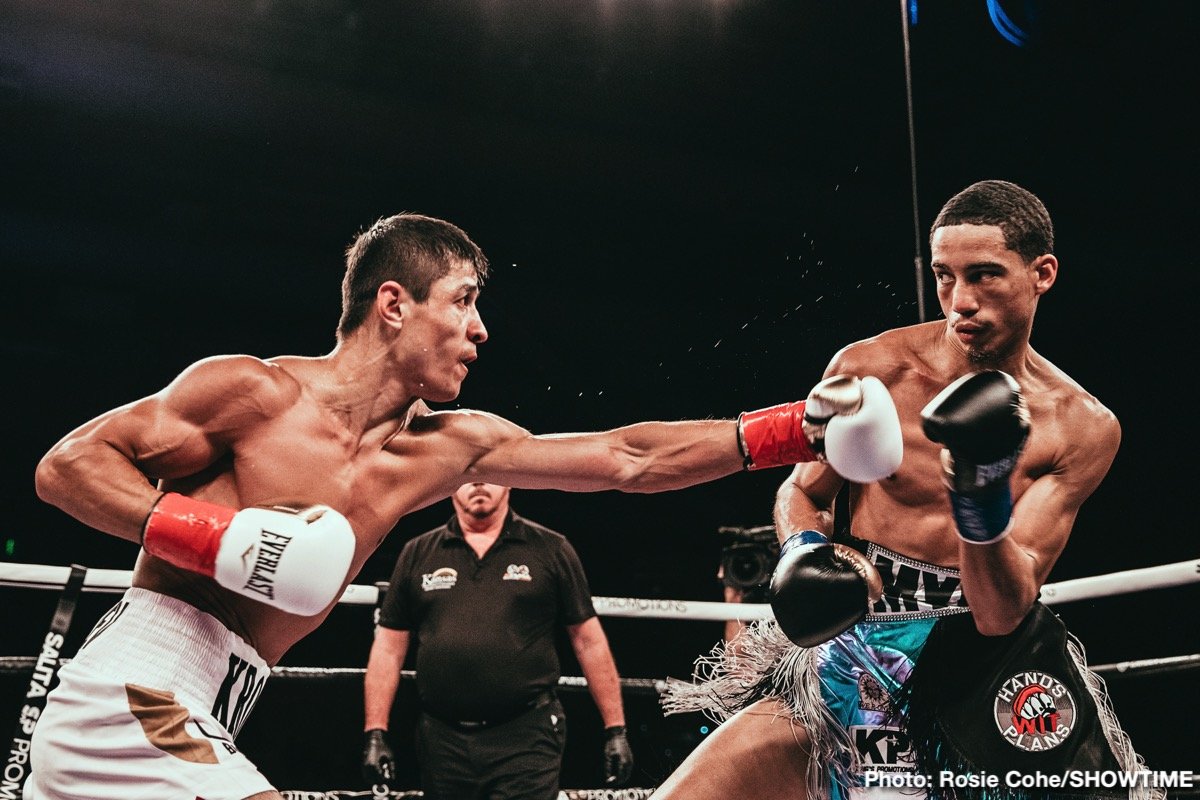 Shohjahon Ergashev overcame a five and a half-inch height advantage recording a unanimous decision victory over fellow undefeated prospect Mykal Fox in the 10-round super lightweight main event of ShoBox: The New Generation Friday on SHOWTIME from the Kansas Star Casino.

With famed trainer Sugarhill Stewart shouting instructions from his corner, the Detroit-based power-punching Ergashev (16-0, 14 KOs), by way of Fergana, Uzbekistan, did enough to beat the rangy 6-foot-4 Fox (19-1, 5 KOs) in a matchup of two exciting undefeated prospects. The scores were 96-94 and 98-92 twice.

“I didn’t think it was a close fight,” said Ergashev, who was only able to land two jabs the entire fight missing more than a hundred times. “He was awkward and his head was very low. He was very long and tall too, so it was hard to hit him in the head. I expected him to run all fight and he did.”

Ergashev said he was disappointed in his performance. “I come to fight,” he said. “I like fighters who stand and fight. I’m a fighter. I like guys who let me showcase my skills and bang. Fox wasn’t even boxing. He was just running around the ring. I wanted to sit down and fight.”

The 23-year-old Fox of Forest Hill, Md., one of the tallest fighters in the 140-pound division, said he agreed with one of the judges’ cards, but not the two 98-92s. “I knew it was close, and thought maybe I did enough to win,” said Fox, who did a nice job slowing the pace of the fight. “I think it was closer than 98-92. I took a few shots, but I knew he was going to be strong.”

Fox became the 186th fighter to lose their undefeated record on the prospect developmental series.

Fox, who had his father Troy and brother and fellow professional boxer middleweight Alantez in his corner, became the ninth fighter in ShoBox history to have a brother who also fought on ShoBox joining brother duos like Jermall and Jermell Charlo, Andre and Anthony Dirrell and Glenn and Nonito Donaire.

In the opening bout of the telecast, England’s Thomas Ward (26-0, 4 KOs) put on an impressive performance and showed U.S. fight fans he will be a force to be reckoned with in the wide-open 122-pound weight class as he won a unanimous decision against ShoBox veteran Jesse Hernandez (11-2, 7 KOs). Click HERE to watch a recap.

Fighting for the first time in the States, the WBO No. 4-ranked Ward of West Rainton, England, scored a fourth-round knockdown and took the 10-round super bantamweight fight easily against Fort Worth’s Hernandez. The scores were 100-89, 99-90 and 98-90.

“I came to America and fought a home fighter and won quite comfortably, I even got a knockdown,” the 24-year-old Ward said. “He was supposed to be the puncher and I was supposed to be the boxer. A lot of people think I can’t punch, then they get over-confident and get clipped. Then they realize I can punch. Look at his face compared to mine. That will tell you something.”

Ward started strong, and seemed to get better as the fight went on. “He’s been on the gas from the opening bell, and he hasn’t gotten off it,” said International Boxing Hall of Famer and ShoBox play-by-play commentator Barry Tompkins in the final minutes of the 10th and final round.

Ward exceeded double-digit connects in every round and topped 30 in five of the final six rounds while Hernandez reached double digits just three times.

It was a clean left hook that sent Hernandez to the canvas in the final seconds of the fourth round. Ward controlled the middle of the fight and landed consistent three-punch combinations against Hernandez, who at the end of round six was warned by referee Bill Clancy that he was taking a lot of punishment and had to show him something or he would stop the fight. At the top of the ninth, the referee still concerned about Hernandez lack of action, called the doctor and asked once again the same question. The doctor cleared Hernandez to continue.

Hernandez said he felt Ward’s power, and was impressed. “Yeah, he got me with that left, but I recuperated,” he said. “But all the credit to him. A knockdown is a knockdown.”

Ward said Hernandez asked for the fight, but wasn’t prepared for the it. “I knew he was a good, experienced fighter,” Ward said. “He’s fought some good guys and knocked out some good guys. He’s supposed to be a puncher, but I was just on another level tonight.

“I wanted a good fight to showcase my skills and I’m glad the people on ShoBox got to see it.”

Farhood interviewed undefeated middleweight world champion Claressa Shields before the main event. Shields and fellow undefeated champion Christina Hammer will meet on Saturday, April 13 live on SHOWTIME to crown the women’s undisputed 160-pound world champion. The blockbuster unification from Boardwalk Hall in Atlantic City, N.J. will be the main event of SHOWTIME BOXING: SPECIAL EDITION live at 9 p.m. ET/PT and is arguably the most significant women’s boxing event in history.

Shields talked about her disdain for Hammer. “I’m going to keep it 100 percent professional,” she said. “I don’t like her as a person but that doesn’t matter. I want to beat her well. She’s just mad because I’m meaner that her and I’m better than her. I’m the GLOAT. Greatest lady of all time. I’m fighting every person that they say I can’t beat. I’m going to unify my division. I’m going to be the undisputed champion and nobody is going to be able to say otherwise.”

Friday’s fights were promoted by Salita Promotions. The full telecast will replay on Monday, February 18 at 10 p.m. ET/PT on SHOWTIME EXTREME and will be available on SHOWTIME ANYTIME® and SHOWTIME on DEMAND®.

Here is what the fighters had to say on Thursday from the Kansas Star Casino.

*–Fight contracted at a catchweight of 142 pounds.

“I know the odds are against me because of his height. He says he’s 6-foot-4 and the tallest fighter I’ve fought was 6-foot-1.

“I just have to be the smarter fighter tomorrow. My limited English skills has never hurt me in the ring and communicating with my corner. Fighting is a universal language. My English is a little bit better; it’s getting better.

“I trained for this fight both in Detroit and some in Florida and sparred with bigger guys like Anthony Dirrell and Leon Lawson at the Big Time Boxing Gym in Boca Raton. I had my conditioning coach B.B. Hudson in Florida with me too. So we are more than ready to go come fight night.

“I’m not eyeing one particular fighter; I just want to fight for a title. It’s been a year since my ShoBox debut against Sonny Fredrickson and I’ve improved a lot. I can’t wait to show my skills tomorrow night.

“I have some surprises that I’ll show on my way into the ring. I like to make it fun, and the fans will see that when I enter the ring.”

“This is the best shape I’ve ever been in. We’ve been trying to put this fight on for a long time. We tried to do it last year, but it didn’t work out. I decided to fight someone the caliber of Ergashev because he’s undefeated, and I’m undefeated. We have similar records, so why not?

“I’ve been watching [Ergashev] fights every day on YouTube. There is some danger in that, but I feel like I the more I can study what he does in the ring, the better prepared I will be.

“I don’t know what comes next for me. I’m still young. I’m just focused on tomorrow night.

“Right now, my brother [ShoBox alumnus Alantez Fox] thinks I’m the better fighter than him, but that’s only because I’m fighting tomorrow. I bet after the fight he will go back to thinking there’s no one better than him.”

“Eventually, I’ll be a featherweight, but I think I can make this weight [122 pounds] for another year, year and a half.

“I’ve studied him on YouTube. I know what to do tomorrow night. I know how to exploit my advantage. He has a No. 4 ranking by the WBO so if we get the win we can get his rating, if not better.

“He’s never seen a fighter like me; never fought in the States, or against a Mexican fighter. So I know I have the advantage. I have the ring IQ, and am the smarter fighter.

“I have 10 rounds as my mindset. Last time I was on ShoBox I wanted to get my opponent out of there. But not this time. Of course, if I hurt him in the first round I will try to get him out of there. But it’s OK to win by decision too.”

“I was offered this fight and it’s a nice opportunity for me. It’s live on SHOWTIME, so why not? This is a great stage and it’s a very winnable fight for me.

“Eventually we will get a world title shot. I just have to keep winning. I know I have the ability and the time is now. If the opportunity is right, we will take whatever is put in front of us.

“He’s supposed to be an aggressive fighter and I’m a boxer so it will be a good mix of styles. I know that he’s a good, strong fighter, but I’ll be ready to handle whatever he gives me.

“Of all the rounds I’ve boxed in 25 victories, I’ve only lost four or five rounds. If you’re not getting hit, you’re not losing.

“I’m a family man and don’t go out. I’ve just been focused 100 percent on my boxing career.

“I’ve been in the States since February 6. We stopped in New York on our way here and trained for a few days. I trained at Mendez Boxing in Manhattan and also trained at Gleason’s Gym in Brooklyn.”

Friday night’s ShoBox: The New Generation telecast will also be shown live in the UK and Ireland on the BoxNation boxing channel (3 am UK time).

Emanating from the Kansas Star Casino in Mulvane, Kansas, the event will feature a 10-round super lightweight showdown between undefeated prospects Shoh Ergashev (15-0, 14 KOs) of Uzbekistan and Maryland’s Mykal Fox (19-0, 5 KOs) and a 10-round super bantamweight battle for the WBA-NABA Championship between Fort Worth’s rugged Jesse Angel Hernandez (12-1, 7 KOs) and Britain’s Thomas Patrick Ward (25-0, 4 KOs).

BoxNation – The Channel of Champions – is a 24-hour dedicated boxing subscription television channel, available in the United Kingdom and Ireland on TalkTalk Plus TV: Channel 415, Sky: Channel 427, Virgin Media: Channel 546 and BT: Channel 415. For more information on BoxNation, visit their website HERE.

Event promoter Dmitriy Salita of Salita Promotions says the addition of BoxNation is a welcome bonus for his fighters on the card, Ergashev and Hernandez.

“BoxNation picking up the event will allow Shoh and Jesse to also display their talents to European fight fans and increase their worldwide profiles. They are both in against top-level opponents who will seriously test them. I’m happy BoxNation decided to pick up this terrific event. It’s a great opportunity for all the fighters on the telecast to become bigger stars around the world.”