What was really surprising is Porter rates Ugas above Spence, and not just him. Porter also said today that he views Keith Thurman and Terence Crawford above Spence.

The way that Ugas dominated Porter in 2019, it’s understandable why he rates him above Spence.

In the past, before his fight against Manny Pacquiao last August, Ugas was a slugger who would come at his opponents looking to KO his opposition.

“I think he’d [Yordenis Ugas] be flirting with number 3 in terms of competition,” said Porter in giving his list of top three fighters he’s faced during his career. “Number 1 and number 2 are Terence Crawford and believe it or not, Keith Thurman,” said Porter.

The way that Porter confidently leaves out Spence in his top three list, makes you wonder if he’s still feeling resentful about losing a close 12 round split decision against him in 2019.

Porter thought he should have been given the decision against Spence, so it makes sense why he wouldn’t include him in his top three listed. Ugas, Keith Thurman, and Crawford clearly got the better of Porter in their fights with him.

That style failed him on three occasions in losses to Emmanuel Robles, Johnny Garcia, and Amir Imam. Although Ugas lost to Porter, the fight was seen as a robbery because it was one-sided.

Ugas arguably schooled Porter in March 2019 and performed better than him than Spence but wasn’t given the win. Since that fight, Ugas has looked great using his aggressive style.

In his last fight against Manny Pacquiao, we saw Ugas boxing more and not brawling as much. He won the battle, but he likely would have done better against Pacquiao had he used his old style.

“I think Ugas has thrown a little wrinkle in his game, and I’m curious on what Ugas comes to the ring on fight night,” said Shawn Porter to Fighthype on the Spence vs. Ugas fight.

“Of course, I’m talking about the Ugas that fought Pacquiao. That Ugas is different from any Ugas we’ve seen before that,” said Porter.

“That Ugas used more boxing, and was very selective with his punching, didn’t wait too long, didn’t get outhustled by Manny or anything like that. He was very smart and picked his moments very well.

“Errol is not Manny Pacquiao. Errol is not going to fight in spurts or at least we don’t expect him to. In my personal opinion, the Ugas that fought Pacquiao is the better Ugas of the two. I think it’s going to take a mix of both to beat Errol.

“Guys, don’t forget, I said, ‘It’s going to take everything I have to beat Errol Spence, and that included boxing him from the outside and fighting him on the inside. Clearly, Ugas can do that.

“To start,” said Porter when asked if it’ll be effective for Ugas to counter Spence as he did with Pacquiao. “Again, we’re talking about EJ [Spence], and we’re talking Derrick James. Derrick James is going to see what’s going on and say, ‘Do this, do that,’ and Errol Spence is going to implement the game plan and also the adjustments.

“That’s why I think this is going to be a really great fight. He showed speed in the fight against Manny, and more than anything, I think that’s overlooked. His boxing skills have come a long way, and I think that the intelligence that we saw against Manny, I don’t think that was by accident.

“I think Ismael Salas implemented the game plan, but you have to go out and be effective with the game plan. Since me,” said Porter when asked if this is the freshest and strongest full-fledged welterweight Spence has gone up against.

“Probably one of the biggest and strongest in the weight class. I think Salas has helped his boxing come a long way. I think Ugas has intelligence as a fighter, but I think it’s based on his way of fighting with that shell boxing style.

“I think now Salas has helped him open up more, and has used his whole arsenal,” said Porter. 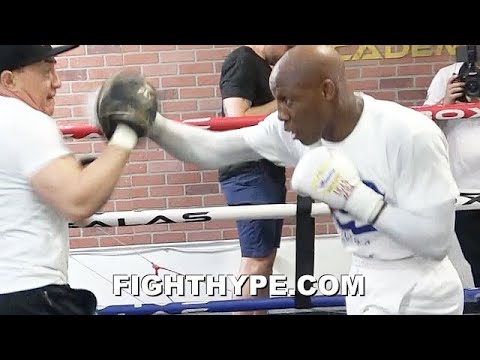