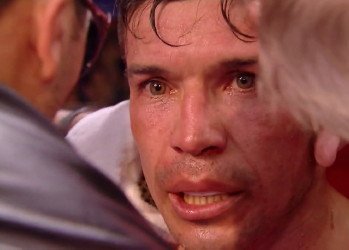 If everything works out well for WBC middleweight champion Sergio Martinez (51-2-2, 28 KO’s) with his June 7th title defense against the ambitious Miguel Cotto (38-4, 31 KO’s), then Sergio wants to face WBA middleweight champion Gennady Golovkin (29-0, 26 KO’s) in a unification fight. But Sergio must get past Cotto, because a loss in that fight would make the Golovkin bout a meaningless one for him.

“I have a hard, complicated fight ahead [Miguel Cotto], but seeing how things are working, I know I’m gonna finish him. Once I KO Cotto on June 7, then I can concentrate on Golovkin,” Martinez said to Munod.

It’s definitely way too early for Sergio to start talking about a Golovkin fight, as the chances of Sergio getting past Cotto wouldn’t appear to be too good right now based on how Sergio looked in his last fight against Martin Murray last April. Granted, Martinez suffered two injuries in that fight in hurting his knee and breaking his left hand, but Martinez didn’t look good at any point in that fight. He appeared weak at the weight, and not nearly as powerful as he once was. Whether that was because he was fighting a big middleweight who was mostly just covering up all night is unclear. Murray covered up with his clam shell defense for 12 rounds, and gave Martinez very few chances to land anything. Of course, this also hurt Murray’s chances of winning the fight due to him wasting so much time just covering up instead of actually fighting.

With Sergio talking about being willing to take the Golovkin fight, this could be a sign that he’s thinking of cashing out in that fight. It doesn’t make sense for Sergio to fight Golovkin at all due to the mismatch in power and youth between the two fighter. A younger version of Martinez would have a chance of beating Golovkin, but not the one that struggled against Murray last April.

Cotto is now trained by Freddie Roach, and he’s got him focusing more on being a puncher rather than trying to get him to box. Roach has Cotto using his left hook a lot more, and he seems much better now than he was with his last couple of trainers. Cotto will likely try and run right through Martinez like he did in stopping his last opponent Devlin Rodriguez in the 3rd round last October. Martinez will need to avoid being stationary if he doesn’t want to get nailed by one of Cotto’s big left hooks.