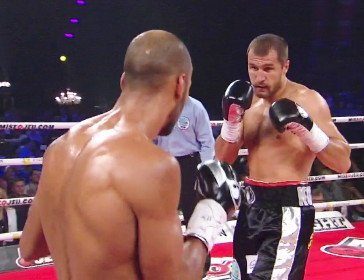 ATLANTIC CITY, NJ: Dating back to December 2011, Sergey “Krusher” Kovalev (23-0-1, 21 KOs) has demolished all seven opponents that he has faced by knockout in an average of less than four rounds per bout. On Saturday, March 29 he’ll be looking to continue the streak and score his 22nd KO when he returns to the ring for his 2014 debut to defend his WBO World Light Heavyweight Title against undefeated challenger Cedric Agnew (26-0-0, 13 KOs) live from the Ballroom at Boardwalk Hall in Atlantic City, NJ.Kovalev vs. Agnew will be televised live on HBO Boxing After Dark beginning at 10:00 p.m. ET/PT.

Presented by Main Events in association with Caesars Atlantic City, tickets for the light heavyweight world title showdown are on sale now through TicketMaster online at http://www.ticketmaster.com/ or via phone (800) 736-1420. Fans can also contact Main Events for tickets at (973) 200-7050. Ticket prices are $26, $51, $77 and $152. Doors will open at 6:30 p.m. ET. Undercard bouts will be announced shortly.

“I am excited to be back on HBO and for my first fight at Boardwalk Hall,” said Kovalev. “I promise to put on an exciting show!”
Sergey “Krusher” Kovalev

Main Events’ President and CEO Kathy Duva said, “We’re thrilled that we’re able to bring Sergey to Atlantic City where we have been so successful in the past. You can’t miss a second of a Kovalev fight. There’s so much tension in the ring. You’re almost guaranteed to see an incredible knock out!”

“In 2013, the Sergey Kovalev secret was unveiled,” said Peter Nelson, director of programming, HBO Sports. “Last year, Kovalev had breakout performances in two televised fights on HBO. Kovalev has demonstrated the knockout artistry and ring activity that earn fans’ respect. In his March 29 return, Kovalev will face undefeated Cedric Agnew in his HBO debut. The Chicago-native Agnew knows what an upset of Kovalev’s momentum could mean to his career. Mark your calendars.”

“Caesars Atlantic City’s commitment to sponsoring some of the top sporting events on the East Coast is no more evident than with this March 29th HBO bout set for historic Boardwalk Hall,” said Kevin Ortzman, Senior Vice President and General Manager of Caesars, Bally’s, and Showboat Atlantic City. “As a boxing fan, I’m particularly intrigued to watch Kovalev, live in the ring, and see if his winning streak continues.”

Kovalev, originally of Chelyabinsk, Russia now residing in Ft. Lauderdale, FL, is notorious for knocking his opponents out early. Of his twenty-one career knockouts, six occurred in the first round, nine occurred in the second round and four occurred in the third round so look for Kovalev to be aggressive early and take out his opponent. Kovalev’s knockouts-to-win ratio is an astounding 91%. His meteoric rise through the light heavyweight ranks began just one year ago with his third round TKO defeat over former world champion Gabriel Campillo on January 19, 2013 at Mohegan Sun in Uncasville, Connecticut. “Krusher” followed that win with his destruction of Cornelius White in another third round TKO win on June 14, 2013 to become the mandatory contender for the IBF title. Kovalev immediately proceeded to challenge for the WBO World Light Heavyweight Championship against Nathan Cleverly in Cleverly’s backyard of Cardiff, Wales on August 17, 2013. He made a splash in his HBO debut by winning the title by fourth round TKO. He continued his title reign on HBO when he knocked out slick boxer Ismayl Sillakh in the second round in Quebec City, Quebec on November 30, 2013.

Cedric Agnew, of Chicago, IL, is also undefeated in 26 professional bouts with 13 of those coming by knockout. Agnew has gone the distance in his last four starts so look for him to take the dangerous Kovalev into deep waters. Agnew holds the USBA Light Heavyweight Title which he earned on April 12, 2013 in his twelve round unanimous decision over light heavyweight gatekeeper Yusaf Mack. With all of his fights taking place in Texas and the Midwest, this will be Agnew’s first fight on the east coast and his HBO debut. Promoter Kathy Duva said, “I’m thrilled that Cedric Agnew stepped up to fight Sergey. For an undefeated young fighter to take a fight that it seems no one else wants, that really says a lot about him. I’m sure he’ll be prepared come fight night and Kovalev will have a tough challenge in front of him.”

Historic Boardwalk Hall has been home to many boxing superstars, including the late Arturo Gatti whom Main Events promoted throughout his entire career. The last nine fights of Gatti’s illustrious time in the ring all took place at Boardwalk Hall, including the infamous Gatti-Ward II and III fights and Gatti’s knockout wins over Jesse James Leija and Leonard Dorin.

Read:  Two Huge Upsets In One Night: Jonnie Rice & Leigh Wood Remind Us Again How Special Boxing Can Be