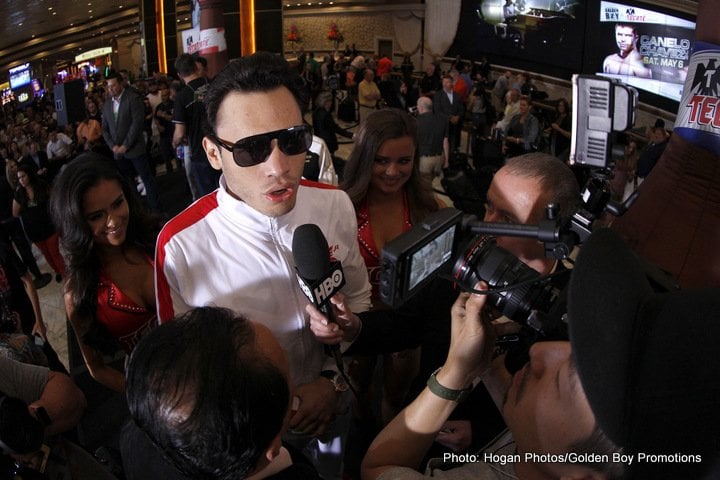 A whole lot has happened since the night middleweight king Sergio Martinez met Julio Cesar Chavez Jr in a memorable (for the final round) fight in Las Vegas back in the late summer of 2012. “Maravilla” suffered chronic knee trouble and, after a bad and heavy stoppage defeat to Miguel Cotto in June of 2014, the Argentine legend retired. As for Chavez Jr, he went on to win a few, lose a few and, in his biggest career fight to date (and ever likely to be), the Mexican took the money and ran against Canelo Alvarez. Chavez has not fought since.

Martinez seemed to be content in retirement (his only sensible option considering his knee trouble combined with his age), while Chavez Jr remains on the look-out for future fights. He may have found one, against, amazingly enough, Martinez. A while back, the two began exchanging twitter messages with the vague idea of having a second fight, and now it seems the return could actually happen. According to Julio Cesar Chavez Snr, who spoke with ESPN Deportes, the fight has been negotiated for November 17th.

“It’s a surprise, the negotiations are really very strong,” Chavez Snr said. “I thought it was a joke about Maravilla Martinez, but it seems to be a fact. I know that many people will not like it, but they will see November 17.”

As unlikely comebacks go, this one has to rank as very unlikely. Martinez, a smart guy, has nothing to prove and he has already beaten Chavez Jr once before, comprehensively (it was a near shut-out for Martinez, until Chavez roared back to sensationally deck the defending champ in the 12th and final round; this near turnaround making the otherwise one-sided affair memorable). There is simply no need for a rematch. Unless Martinez is in need of money.

From Chavez Jr’s standpoint, his motivation will of course be revenge. But what does Martinez stand to gain, apart from maybe some decent money? But will fans pay for this fight? Will fans even watch it at all?

Martinez was, in his prime, a great middleweight. The southpaw scored some great wins; his chilling one-punch KO over Paul Williams in their rematch being a genuine stunner. But now, at age 43, with bad knees and having been out of action for over four years, how much can the former champ possibly have left?

Chavez Jr, may feel he needs to redeem himself for his relative non-effort against Canelo last May, but would a win over an aged former champ – one with bad knees! – really do it for him? Who knows if this one really does come off (it is up as happening on BoxRec, but there is no venue or weight listed, yet) but these days, nothing really seems to come as a big surprise any longer.