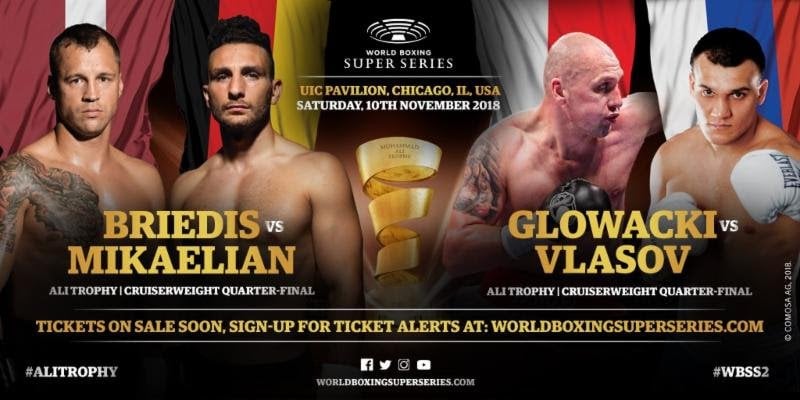 Season I star Mairis Briedis vs. Noel Mikaelian and Krzysztof Glowacki vs. Maksim Vlasov are the two Quarter-Finals on an incredible doubleheader when the World Boxing Super Series comes to the UIC Pavilion in Chicago, USA.

“I am really looking forward to fighting in Chicago,” said Briedis (24-1, 18 KOs). The Latvian hero is undoubtedly one of the favorites to take home Season II’s Ali Trophy in the 200-lb division.

“I am happy to be back in the World Boxing Super Series, and I am looking forward to fighting in front of a U.S. crowd. I am sure there will also be a lot of Latvians in the arena to help create a fantastic atmosphere.”

Briedis’ opponent, Germany’s Noel Mikaelian (23-1, 10 KOs), is eager to perform on the biggest stage – only a split decision defeat, in an IBF eliminator against Krzysztof Wlodarczyk, prevented him of participating in Season I.

“There are only world class fighters in this tournament, but I believe my ring IQ will give me the edge to win it,” said Mikaelian.

The second main event in Chicago on November 10 is a potent match-up between Poland’s former world champion Krzysztof Glowacki and Russia’s Maksim Vlasov.

The exciting southpaw fought Season I winner Aleksandr Usyk in 2016 – relinquishing the WBO belt over 12 rounds, he won the belt in 2015 via knockout against Marco Huck.

“I have been waiting for a long time for my chance, and I am full of power and great energy. I am going to win this tournament and become world champion again!”

Vlasov (42-2, 25 KOs), a fighter with success at multiple weights, likewise enters the quarter-final with great confidence after winning 12 straight fights since moving up in weight in 2015.

Tickets will be available to buy via TicketMaster.com or by calling 800-745-3000 on Monday 1 October. Fans can be alerted by email when tickets go on sale by signing up for Ticket Alerts here.

Ahead of Season 2, US-based boxing fans are able to watch Season I’s Ali Trophy Super Middleweight Final, George Groves vs Callum Smith on Friday, 28 September, LIVE on the global sports streaming platform. To sign up for a one-month free trial, fans can visit DAZN.com or download the DAZN app to their preferred connected device.