In what sounded a lot like farewell messages from the three fighters, they showed respect to the 42-year-old Pacquiao(62-7-2, 39 KOs), letting him know how much they respect him and wishing him good luck against the dangerous Ugas (26-4, 12 KOs) on Saturday night.

Pacquiao hasn’t fought in two years since 2019, so no one knows what to expect from him in taking on one of the top welterweights in the division in Ugas.

With the way boxing has changed, it could prove to be impossible for another fighter to come along in the future to accomplish the same feats that Manny Pacquiao

“Hi, this is Brian Castano, the current WBO super welterweight champion. I want to send a big hug to an idol, such as Manny Pacquiao,  a source of pride for every boxer,” said Castano to Premier Boxing Champions.

“He’s exemplary, the best boxing has ever had. He’s set an example. You are a great role model, as a person and as an athlete.

“It’s an honor to be sharing this with you all. Pacquiao, you are the best, a true legend.

“Hi, I’m Sergio ‘Marvilla’ Martinez. Well, I want to congratulate Manny Pacquiao for the position he currently finds himself in. Fruits of his hard work.

“A byproduct of decades of giving his all with absolute passion. I think he is one of the top four or five champions that the sport of boxing will ever see.

“A lot of decades, I would dare say even centuries, will go by until we see another Manny Pacquiao. I am lucky enough to have come along at the same time as he did and watch him fight nowadays.

“Pacquiao’s legacy is secure as one of the best in history. Congratulations, Manny.” 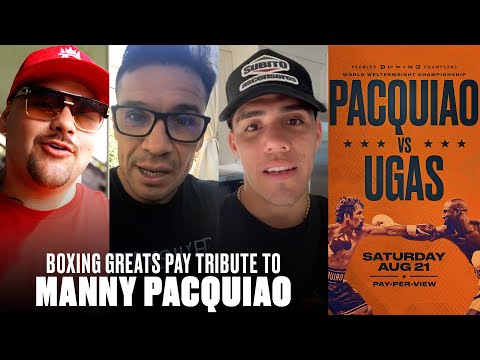 “A shout out to Manny Pacquiao, we’re rooting for you. You inspired me so much when I used to train with Freddie Roach at the Wild Card. I know you got a tough fight [against Yordenis Ugas], but you got this, brother. God bless, good luck.”