On the same day as his must-win rematch with Andy Ruiz was officially confirmed for Saudi Arabia on December 7th, Anthony Joshua posted a photo of himself on social media, and how drastically slimmed-down AJ appears has got fans talking. It’s no secret that Joshua, dubbed a bodybuilder by some (Tyson Fury for one), has been criticised for carrying too much muscle, that his muscle mass saw to it that he burned up oxygen at a quite alarming rate in fights and struggled as a result.

Joshua, aside from being chinned and hurt numerous times by Ruiz back in June, was certainly blowing in the fight in New York. And now it looks, judging by today’s photo, as though Joshua has set about cutting weight as well as muscle. But will this allow him to get the revenge he so craves and needs?

“I need to get these titles back,” Joshua has said. “If you put me and Ruiz in a machine, nine times out of ten I should beat him. That was just his night.”

Fans shocked by Anthony Joshua's new look as heavyweight star is now 'a boxer instead of a bodybuilder' https://t.co/HX6Hvo4Aqp

That is debatable to say the least. In terms of tactics, maybe Joshua is looking to come into the December fight light, perhaps lighter than he has been in some time, and maybe Joshua will be looking to box and move, pick up points and not make the mistake of getting into a slugfest the way he did just over a couple of months ago. This of course could lead to a dull fight, but Ruiz will be looking to upset any plans AJ may have along those line and make his his type of fight yet again. 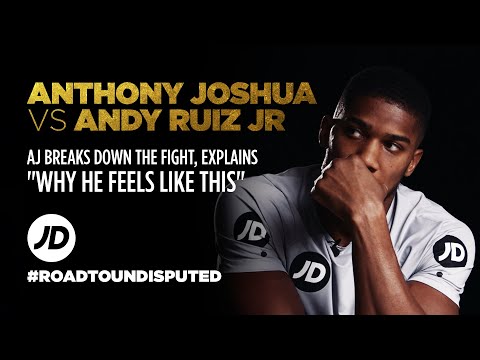 Ruiz – who has had to listen to plenty of criticism regarding his own physique but for entirely different reasons to those concerning Joshua – has vowed to lose some weight for the rematch himself, and come in looking trimmer and more solid than we have grown accustomed to seeing him. Who knows, we could have two different-looking fighters clashing in Saudi Arabia in December.

Both men know they have to work as hard as can be, that the stakes are so high going into this fight. The winner will take one step towards becoming THE man of the heavyweight division and will be able to look forward to more massive fights and paydays. The loser not so much; especially if it’s Joshua.

It promises to be one huge night in Saudi Arabia in the final month of the year.