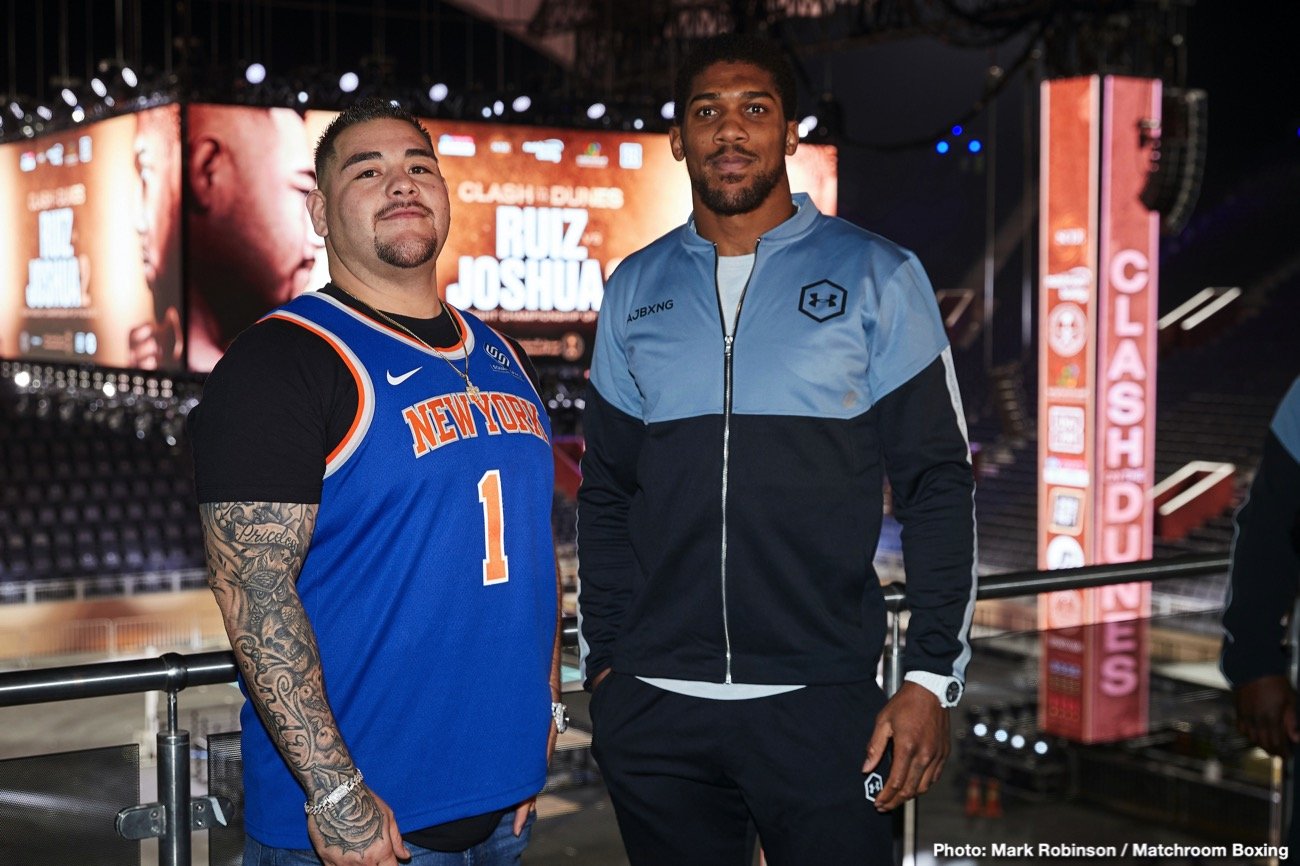 This Saturday night live on DAZN in America the most anticipated event takes place in Saudi Arabia, a rematch between Anthony Joshua and Andy Ruiz Jr. The first meeting was an unforeseen outcome marking one of the biggest upsets in heavyweight history. So many questions surround this second go round on both sides of the fence. Was Andy’s left hook and follow up attack just a random fluke like Joshua and many others claim? Can Anthony Joshua’s defense hold up 12 rounds? Will a full camp be enough of difference for Andy? Will the weight loss help Joshua and can he fight a more discipline style? All or most of these questions will get answered come Saturday in the main event.

Back on June 1st Ruiz’s stoppage of Anthony Joshua sent shock waves around the boxing world and especially at the heavyweight division. So many folks had set their sights on a unification bout with Joshua and Deontay Wilder only to see AJ’s American debut go horribly wrong. The opening two frames of their June tilt could be split. One of the best if not the best rounds of the year came in the 3rd, when Joshua clipped Ruiz during an exchange of left hooks. Ruiz was stunned and by the look in his eyes it appeared he may have bitten off more than he could chew. Andy took his time getting up all the while looking directly at the referee to assure he was fit. Once to his feet, Ruiz was met with a destructive looking right hand from Joshua. Not only did Andy eat that blistering right, he made a quick adjustment by ducking another left hook that had his name on it. Ruiz timed Anthony perfectly landing a monster left hook under the ear/on the side of the head.

Immediately Joshua’s legs failed him as he stumbled around the ring like a young fawn walking on ice for the very first time. To his credit Anthony lifted himself from the canvas only to taste the mat again late in the 3rd by getting walloped with overhand rights on the ropes. This time Joshua looked finished as the ref gave a command to come forward, Anthony didn’t adhere to his direction instead attempting to push down his protector back under his trunks. Joshua walked gingerly to his corner and was so out of it he was asking what shot hit him and wondering why he felt this way. Assumingly he had a walking concussion and it became clearer he was in rough shape asking more questions later in the fight.

The 4th round was all about survival and AJ did just that and at the time it seemed Ruiz had missed a golden opportunity to stop his man. Joshua literally took a deep breath to show Andy he was taking a break. Looking back at it Ruiz probably didn’t want to punch himself out which makes sense given the fact he didn’t get a full training camp. On my scorecard I had Joshua winning the 5th round by jabbing on the move and from time to time landing flush right hands. The two engaged in a few minor firefights in the 6th round which Ruiz got the best of. Two more knockdowns in the 7th round saw Anthony turning his back on the ref in order to get more time to recover. Even putting his arms up on the ropes in the corner as the ref assessed if AJ wanted to continue. Bottom line is a boxer has to do everything possible to show he is okay to fight. Case in point is Tyson Fury after being out cold for a split second last December against Wilder.

Joshua seemed relieved of his duties and the mounting pressures that come with being a heavyweight main attraction. Now that time has passed and Joshua has dropped some weight lets breakdown some scenarios for how this great matchup on paper will play out in the ring. Was it smart to lose weight or at least not bulk up from weightlifting during training camp? Yes, and from the sounds of it Joshua put the time in working on technique which could help now and more so in the future if he continues that specific practice. Time will tell if AJ lost too much weight during the last few months. His fluidity and speed should improve maybe not drastically on Saturday but it could make a difference. If Anthony does plan to use more movement on the outside it was a must he dropped weight but that won’t guarantee he won’t gas out fighting an unfamiliar game plan. It’s one thing to do it in camp and another to do it on fight night under the bright lights. Example would be how NBA basketball players call it ‘game legs’ and they can’t get their legs back in game shape until they participate in a real game and not just one of them.

The outside game does seem to be Joshua’s focus but it’s not just a matter of can he last all 12-rounds boxing on the back foot. Many fans and even some media folks see boxers who stay on their bike for a whole fight as weak or call the fighter a chicken. In reality endurance is crucial but the other important part is defense from the outside which is a whole different beast on to itself. At the mid-range, Joshua’s preferable offensive area, on the inside or out, defense can make or break a boxer. AJ’s defense was already mediocre at best and we’ve seen as opponents play keep away or get in the trenches, his offense is nowhere near as crisp or accurate. Up until this point, the Watford native loves to be at mid-range while creeping ever-so-slightly forward eventually cutting the distance and the ring off. That’s when he looks absolutely brilliant throwing combos featuring left hooks, upper cuts, and right hands.

Ruiz has recently stated he lost too much weight early in camp and felt drained to an extent. So he decided to not worry about losing weight but tighten up his physic and stick to fine tuning his skills. Ruiz claims to be ready to chase and cut the ring on Anthony Joshua which will probably take him several rounds. This podcaster could see Joshua pumping a jab, not a lazy one or he will get stopped for sure, while steadily moving in a lateral sense. Not sure how many pivots off the ropes will see but most of the signs point to movement. Not that AJ will have to be perfect but he won’t be able to make many mistakes. And we’ve seen not only in their first fight but a few times were Ruiz is able to find holes in the opposition’s defense and usually while they punch together. It is a tall order to move for the majority of a fight for the first time and rely heavily on defense and pots shots. How many combinations will Anthony throw if he feels he’s getting timed by the first ever heavyweight champion of Mexican descent?

Joshua will take a lead out of the gates but at some point Ruiz will land a punch or series of punches that change the fight for good. Andy will cut the ring off and have Joshua trapped on the ropes as he works the body and head with heavy punches. Unless Ruiz knocks AJ down repeatedly it’s highly unlikely he will get the nod on the scorecards. Also, worth a mention is Luis Pabon serving as referee and his history of allowing a jab and grab technique we saw out of Wladimir Klitschko. If Joshua can somehow slow the pace and apply a similar style this one is probably in the bank. Definitely not ruling out AJ could still stop Ruiz with hard punches late or anytime. It’s just a difficult task to change your whole strategy as a fighter in one training camp.

My Official Prediction is Andy Ruiz Jr. via 10th round stoppage.

Side Note: Tune in early before the main event to checkout Povetkin /Hunter and Hrgovic/ Molina on DAZN. Also, later that the night on Showtime Charlo/ Hogan & Eubank/ Korobov.