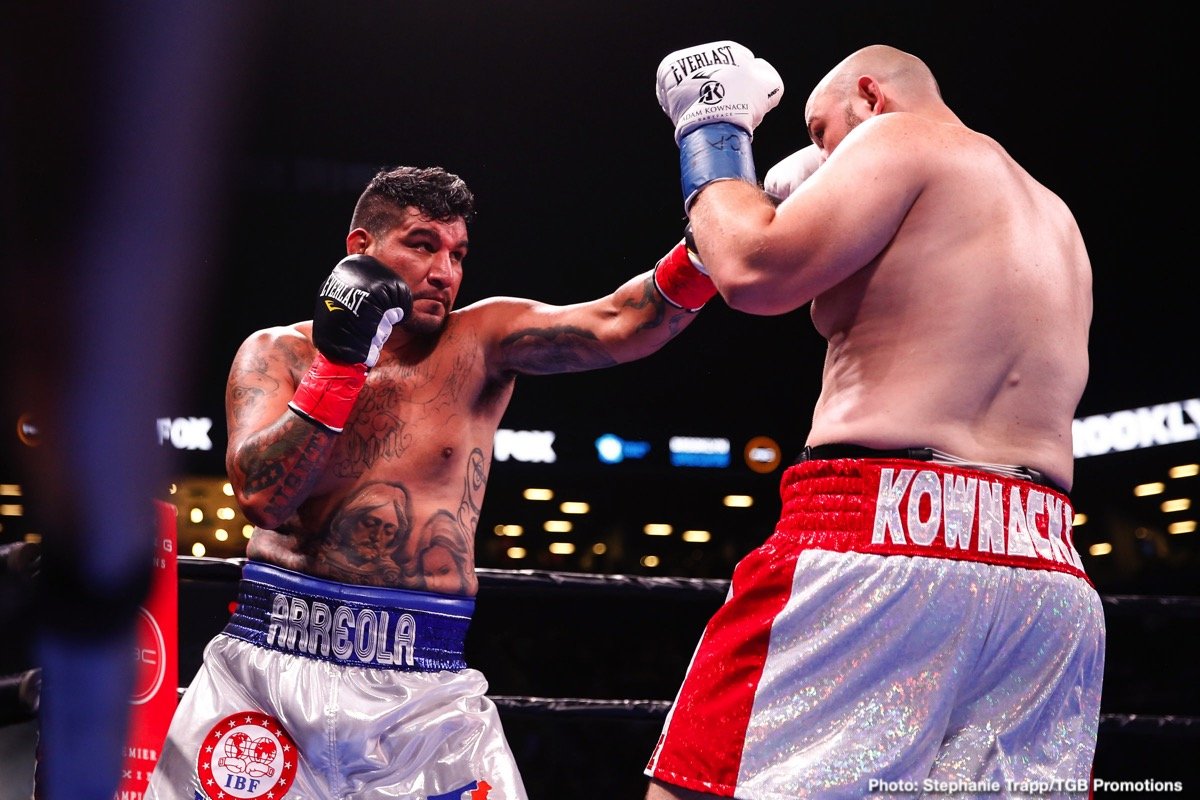 The event is promoted by TGB Promotions. Tickets go on sale Friday, March 26 at 10 a.m. PT and can be purchased at AXS.com. Dignity Health Sports Park will be open to fans in a limited capacity, with all guests remaining socially distanced and subject to local and state health guidelines throughout the event.

“This pay-per-view card is one of the best all-action lineups that I can remember and is loaded with fighters who know nothing but delivering toe-to-toe combat. Headlining the card is the only heavyweight champion of Mexican descent, Andy Ruiz, Jr., taking on Chris Arreola, the first serious Mexican-American heavyweight contender,’’ said Tom Brown, President of TGB Promotions. “Andy Ruiz Jr. shocked the sports world when he destroyed Anthony Joshua to win heavyweight titles at Madison Square Garden. No upset in recent years has been nearly as big a story as Ruiz stunning Joshua and no boxer of Mexican descent weighing more than 175 pounds had ever won a championship before him. Ruiz has re-dedicated himself and is focused on regaining the heavyweight crown and Arreola is determined to make one more run at the title.

“The pay-per-view undercard matchups are toss-up fights that predicate great action, featuring top young contenders, a former world champion and an Olympian. No matter what happens on May 1, boxing fans will be the real winners.”

Ruiz and Arreola, two Mexican-American heavyweights from Southern California, have been circling each other for years. They both had designs on becoming the first fighter of Mexican descent to win the heavyweight title. Ruiz won it and lost it, while Arreola still hungers for it. This high-stakes match will determine who remains in the hunt.

Ruiz (33-2, 22 KOs) shocked the boxing world in 2019 when he was brought in as a late replacement to face heavyweight world champion Anthony Joshua and turned the tables on the champion, knocking him out in the seventh round and taking home the titles. The 31-year-old from Imperial, California lost his rematch with Joshua by unanimous decision, but has now rededicated himself to regaining the heavyweight championship.

“I can’t wait to get back in the ring on May 1,” said Ruiz, who is now being trained by renowned coach Eddy Reynoso. “Training with coach Eddy in his gym has been amazing. I’m around great fighters like Canelo Alvarez and we’re putting in the work so that I can look better than ever.

“I have known Chris Arreola since I turned professional. He’s a Mexican warrior just like me, and I expect him to come at me with everything he’s got. This is going to be an action packed event between fighters who do not go backwards. I will be smart and ready to do whatever it takes to get the win and put myself back in position to become heavyweight champion again.”

Arreola (38-6-1, 33 KOs) has a career that has spanned 17 years and he remains one of the most dangerous heavyweights in the sport. Born in East Los Angeles to parents from Mexico, Arreola has fought for the heavyweight championship three times and come up short. He began working with renowned trainer Joe Goossen before his last match against Adam Kownacki and appeared to have turned back the clock. It was a back-and-forth, up-tempo match and Goossen’s work with Arreola was on full display. Arreola acquitted himself well, but came up on the short end of the decision.

“Training with Joe Goossen is tedious, hard work,” said Arreola, whose father was a boxer who would take him to Mexico to watch the legend Julio Cesar Chavez, Sr. train. “We’re doing everything that we can so that when Ruiz and I face each other, fight fans will get treated to an all-out war between the two best Mexican-American heavyweights to ever step in the ring. This matchup should be a fan friendly fight, and I plan on winning behind all of my hard work.”

The 31-year-old Figueroa (30-1-1, 19 KOs) is from a fighting family along with his younger brother Brandon, the WBA Super Bantamweight Champion. Figueroa won the WBC Lightweight World Championship with a unanimous decision victory over Nihito Arakawa in a 2013 “Fight of the Year” and successfully defended the title two times before moving up to super lightweight in 2015. In his last fight in 2019, he fought Yordenis Ugas, who is currently the WBA Welterweight World Champion, losing a unanimous decision.

“I’ve been training with Joel Diaz for the last six weeks and doing everything necessary leading up to this fight,” said Figueroa. “This is the best shape I’ve ever been in this far out from a fight, because I now realize what I need to do differently to ensure the longevity of my career. I’m training and preparing the right way. I can’t wait to prove on May 1 that I belong with the elite fighters in this division.”

Abel Ramos (26-4-2, 20 KOs) is also from a fighting family. His older brother, Jesús, Sr. trains him, and his nephew, Jesús, Jr., is a spectacular welterweight prospect featured on this pay-per-view undercard. Ramos, 29, is from Casa Grande, Arizona and lost a narrow split decision to Yordenis Ugas in his last fight. He got a chance to display both his comeback ability and his punching power in his previous fight before Ugas, when he scored a last second KO victory against Bryant Perrella. Ramos was trailing on all the judges’ scorecards at the time of the knockout.

“This fight will be exciting because Omar’s boxing style and my boxing style match up perfectly for an action-packed fight,” said Ramos. “I expect him to put on the pressure like he always does. But I will be prepared for that and anything else he brings on fight night. A victory over Omar will put me in position to fight for a world title again. I want to earn that shot with a great performance and prove that I can beat the best fighters in the division.”

Fundora (16-0-1, 11 KOs) continues to rise up the super welterweight ranks and his match against the veteran Jorge Cota will be his toughest to date. He steps into the squared circle showing off the skills of a rugged boxer who is just as comfortable fighting on the inside as on the outside. The 23-year-old Fundora’s mother is Mexican and his father is Cuban, and both were boxers. He was born in West Palm Beach, Florida but now lives and trains in Coachella, California. Fundora is coming off a knockout victory over Habib Ahmed last December.

“I’m really looking forward to fighting Jorge Cota on this big event on May 1,” said Fundora, who at 6-foot-6 looks like he should be setting up on the wing of a basketball court rather than squaring off in a boxing ring. “I’m laser-focused because I know this will be a tough test for me. I’m sure that he will be training hard too, but I’ll be up for the challenge and I look forward to showing off my skills and fighting for all the hard-working people out there.”

Cota (30-4, 27 KOs) is a rugged slugger who always comes to fight. He has been in the ring with unified 154-pound world champion Jermell Charlo, former unified world champion Jeison Rosario and top contender Erickson Lubin. Cota, 33, is from Los Mochis, Sinaloa, Mexico and is coming off a powerful knockout victory over Thomas LaManna last January. With his experience and power, Cota will present a challenge yet-unseen by the rising Fundora.

“I am treating this fight like it is do-or-die for my career,” said Cota. “Fundora is very tall, but he can be hit. I think my style works well against his. I can’t wait to prove what I can do on May 1.”

Ramos (15-0, 14 KOs), the nephew of welterweight contender Abel Ramos, has paved his way to stardom in the talent-laden welterweight division with highlight-reel KOs. He has scored five-straight knockout victories following his only pro fight that went the distance, which came in a June 2019 unanimous decision over Kevin Shacks. He steadily increased the toughness of competition in 2020 and he has continued that trend in 2021. In his last fight, Ramos scored a spectacular knockout victory over rugged veteran Jesus Emilio Bojorquez in February.

“I’m looking to make a statement in this fight against a tough opponent in Javier Molina,” said Ramos, a 20-year-old from Casa Grande, Arizona. “We know it’s a big step up, but my team and I feel like it’s time the world sees my talent. Molina will bring out some of the many things that I’m capable of. This win would prove that I’m not just any prospect. Fight fans don’t want to miss this one, because they’re going to see an exciting glimpse of what I can do in the ring.”

The 31-year-old Molina (22-3, 9 KOs) also grew up in the sport, as his father was an amateur boxer. Molina was on the 2008 U.S. Olympic boxing team, while his twin brother, Oscar, represented Mexico in the 2008 Olympics. He has an older brother, Carlos, who also is a boxer. Fighting out of Norwalk, California, Molina is coming off a unanimous decision loss to Jose Pedraza last September. Before that, he scored a unanimous decision victory over veteran contender Amir Imam.

“I’m excited for this fight and for the opportunity to face an unbeaten prospect in Jesús Ramos,” said Molina. “A lot of people are probably counting me out, but I’m ready to prove all the doubters wrong. This is going to be a great fight that fans won’t want to miss on May 1.”